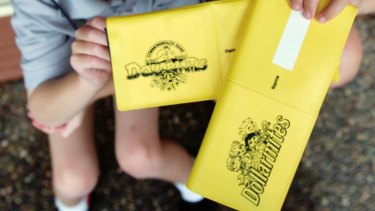 Dollarmites is worth about $10 billion to the Commonwealth Bank.Credit:Fairfax Media

School banking has been hit with a series of scandals in recent years. This has included an expose by The Age and Sydney Morning Herald in 2018 that CBA staff had fraudulently set up thousands of accounts in the names of children without parental consent to claim bonuses. In 2019, it emerged that junior primary school children, some as young as eight years old, were being introduced to the concepts of credit cards through their school banking program.

"The Victorian curriculum sets our expectations for financial literacy and that must be our focus. It is time to draw a line under this issue."

The state government's concerns include complaints from students, teachers and families about the quality of the education and the financial literacy outcomes of the programs. There are also concerns about the tactics some banks have used, including luring children with prizes to build brand loyalty in young children. Another concern is the interest rates offered through the school banking programs are low compared to adult banking products.

Consumer group Choice has called upon other state and territory governments to follow the Victorian government’s move to ban the programs.

"Choice has never been able to find any evidence that programs like the Dollarmites have any impact on long-term savings habits. The only impact they have is to give the Commonwealth Bank a steady stream of young customers, many of whom stick with the Commonwealth later in life.

The Commonwealth Bank and the peak body representing the banking industry, the Australian Bankers Association, have been contacted for comment.

Our Morning Edition newsletter is a curated guide to the most important and interesting stories, analysis and insights. Sign up here.