‘The time is now’ for Australia to harness new vaccine technology

The resurgence of COVID-19 cases in Sydney is a salient reminder of how crucial a successful vaccine will be in paving a path to normality.

News of a growing cluster of cases on Sydney’s northern beaches broke one week after The Sydney Morning Herald and The Age reported the University of Queensland and CSL had shelved Australia’s home-grown vaccine project, leaving the Oxford/AstraZeneca vaccine as the only option for local production.

The federal government has also ordered doses of the Pfizer/BioNTech vaccine, which has shown efficacy of up to 95 per cent and has been the first coronavirus vaccine to launch into communities. However, there’s no chance of that vaccine being produced in Australia for the time being. 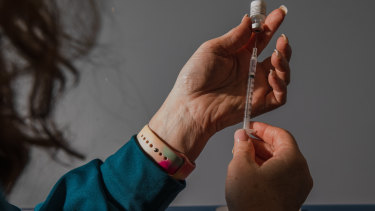 Australia will import the Pfizer vaccine, but it cannot be made here. Credit:Bloomberg

CSL has been quick to quell investor and media expectations that it can make the product onshore, citing the difficulties in preparing its facilities for the mRNA vaccine format.

The area of mRNA technology is still new and involves injecting recipients with genetic material — “messenger RNA” with the viral protein, in turn training the body to fight the virus without exposing it to the real thing.

It has to date shown the most promising option to fight COVID-19, with Pfizer’s vaccine and that of US biotech Moderna so far proving to be the most effective options in the market.

With the UQ vaccine shelved and the Astra Zeneca vaccine still working towards regulatory approval, industry experts and investors are urging Australia to come up with a national plan to manufacture these new vaccines and other therapeutics designed using mRNA technology.

Monash University Professor Colin Pouton, who has been working on an mRNA COVID vaccine project in Melbourne, says the scene is set for investment, but success won’t be simple.

“The time is now,” he says. “We really should be trying to develop companies based around mRNA. Obviously, the difficulty [Australian companies] will have is that they tend not to have enough capital in the early stages to get to the next stage, and the following stage. They tend to be capitalised at every level at about 10 per cent of the US.”

There are two key questions for Australia to answer on mRNA: who is best placed to manufacture these products, and how can the country produce its own research ready for commercialisation?

Era of the small innovators

Professor Pouton says it’s worth remembering that it was smaller startups, rather than their larger distribution
partners, that have developed the innovative treatments like the COVID-19 vaccines. Moderna was a relatively unknown biotech before it had funding beefed up to build its vaccine. The core of Pfizer’s vaccine was developed by little-known German firm BioNTech.

“The major pharmaceutical companies, these days they are not actually very innovative — they tend to bring in products and develop them as pharmaceuticals. Their expertise is really in the process of making a product suitable for human use.”

Discussing the mRNA vaccine technology last week, CSL denied it was at risk of being left behind in global vaccine making because it was unable to make the product onshore. “I don’t think we are in danger of being left behind more broadly,” chief scientific officer Andrew Nash said.

“We should think about vaccinations more generally. Our business is in influenza, and indeed we do have mRNA programs within that part of our business, so it’s certainly something we’re considering.“ 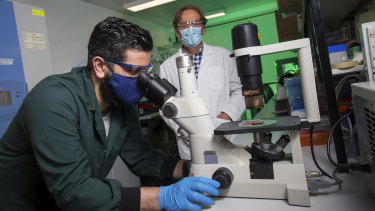 Harry Al-Wassiti (left) and Colin Pouton are working on a COVID-19 vaccine at Monash University.Credit:Paul Jeffers

While CSL investors and analysts have largely left vaccine making out of their models this year, those that hold the stock are interested in seeing how the $132 billion biotech giant moves on mRNA production investment.

“We are broadly supportive of a strategic move here, although are waiting to hear more from management themselves. CSL is very cash-generative but this could potentially be a significant drain on resources. So how they move may be as important as whether they move” at all, says the manager of the Pengana WHEB Sustainable Impact Fund, Ted Franks.

“MRNA-based vaccines are a real potential disrupter to the vaccine industry. They have the potential for faster and cheaper production despite some challenges on the logistics side,” he said.

Despite the success of the Pfizer and Moderna vaccine trials, not everyone is sold on mRNA technology.
Nikolai Petrovsky, the founder of South Australian COVID-19 vaccine development startup Vaxine, says it’s worth noting that the full impact of mRNA-derived treatments is yet to be measured.

“If mRNA vaccines are shown to give durable pandemic protection, which we will know in a year or so, that is going to have a big impact for where vaccine investment goes in future,” he says.
“There are already tens of companies who are jumping into mRNA vaccines. If these COVID-19 vaccines are successful, we will see a lot more companies enter the mRNA field, including ourselves.”

While CSL has long been championed as the lynchpin of Australia’s pandemic preparedness, Petrovsky questions whether the company should be treated as the only option for expanding on these new technologies.

“Are CSL the best placed for vaccine innovation? I would argue not.

“Until recently, you could hardly call them a vaccine company — they had the old flu vaccine facility in Melbourne, but 99 per cent of their operation was plasma products.”