Maritime Super was this month labelled one of the country’s worst performing super funds in the Australian Prudential Regulation Authority’s inaugural test that measures fees and investment returns against a tailored benchmark.

The fund signed a deal in February to outsource its investment management to hospitality super fund giant Hostplus but Maritime Super’s board, financial planning and admin staff have been retained to run other services offered by the fund. 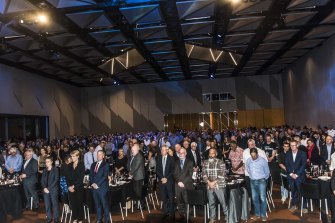 Six former Maritime Super employees, who spoke on the condition of anonymity for employment reasons, have criticised the fund’s approach to spending members’ money on the Maritime Union of Australia (MUA) and promoting associated lender, Unity Bank.

Maritime Super has been the principal sponsor of major MUA events including the past two quadrennial meetings in 2020 and 2016 held at the Gold Coast’s Star Casino which were each attended by up to 800 union members and cost the fund a combined $70,000.

The super fund also sponsored a major event in 2018 to commemorate the Patrick’s waterfront dispute for $25,000, which was attended by Labor heavyweights Bill Shorten and Tanya Plibersek, as well as MUA national council dinners held in Sydney each year.

Former employees have described the fund as “politicised” and “cosy” with the union and have raised questions about the financial benefit these event sponsorships bring to members given the lack of brand promotion at them.

“They weren’t given a speech, the CEO wasn’t called up to talk about Maritime Super or anything,” said one senior source. “But they still paid out a lot of money. Is that right? To be quite honest, it’s not. You might get away with it from a legal point, but from a moral one, it’s not.”

The fund’s annual sponsorship budget is $50,000, which is split between union and employer groups. A Maritime Super spokesman said the fund supports “selected industry events in order to engage with its members and promote the fund to the industry”.

“This spending comes from the fund’s modest marketing budget and is fully disclosed, including to regulators,” the spokesman said. “The superannuation industry is one of the most heavily regulated industries in the country. At no time have any regulators expressed concerns to Maritime Super about our marketing activities.”

“If those things are absent then that definitely raises some red flags,” he said, adding questionable branding exercises have been a longstanding problem among the $3.3 trillion industry.

“The issue has been funds haven’t been forced to justify the value of these sponsorship deals back to members. That’s the duty that has always applied to superannuation funds but for too long they haven’t been held accountable to it.”

Mr O’Halloran said event sponsorships can be justified “if they can attract more members to the fund that might grow scale” but more evidence was needed. “That’s a pretty easy excuse that has been used in the past to bat away any kind of criticism of sponsorship funding.”

Maritime Super has a longstanding cross-promotional partnership with Unity Bank and spruiks its services, including bank loans, term deposits and credit cards, on its website. “The rates you can get from other financial services in a lot of respects are superior,” said one source. “It’s all part of the union’s gravy train.”

A number of Maritime Super directors, including Paddy Crumlin, Michael Doleman and Garry Kearne, have served as directors at both the fund and bank at the same time. The fund did not respond to questions about how potential conflicts are managed.

Maritime Super’s board and large remuneration packages remained fully intact despite the fund’s investment management being fully outsourced to Hostplus. Mr O’Halloran said investing is a core part of a super fund’s mandate and called for greater scrutiny of these types of deals. “If funds are setting up and outsourcing all of the core functions and still charging members a large amount of money to run expensive boards or a whole bunch of extra services, they really need to be justifying how that’s adding value back to the members.“

EISS Super was last week exposed to have spent its members’ retirement savings on corporate parties at Sydney’s Museum of Contemporary Art and sponsorship deals with close links to senior staff members. Chief executive Alex Hutchison resigned abruptly amid what he called a “calculated smear campaign”.

The federal government has introduced new laws to ensure all expenses by super funds are in members’ best financial interests, in an effort to crack down on excessive sponsorship and marketing budgets. APRA has sent letters this year to 20 super funds suspected of excessive spending.

Liberal MP Tim Wilson now plans to call EISS Super’s senior executives before the government’s economics committee to probe what value these deals brought to members and what processes were used to assess the financial benefits.