Latitude Financial chief executive Ahmed Fahour has set his sights on disrupting the big four bank’s dominant position in consumer finance, as the company gears up for its third attempt at a sharemarket listing.

The non-bank lender, which is slated to float with a market value of $2.6 billion later in April, on Wednesday lodged its prospectus and said it had secured strong commitments from strategic, institutional and retail shareholders. 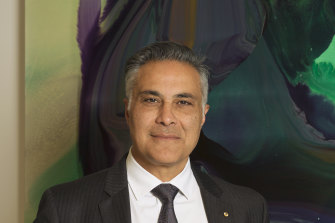 After being forced to abort a listing attempt in 2019, the company’s private equity shareholders are taking a cautious approach and raising only $200 million in the initial public offering, selling the shares at $2.60 each.

Banks are facing a wave of competition from the likes of Afterpay in their consumer finance arms, and Mr Fahour said Latitude was also seen as a disruptor, albeit one mainly focused on instalment loans, personal and auto loans, and credit cards.

“Like Afterpay and like Zip, we are in the consumer finance space. All of us are considered disruptors, I guess, to the traditional big players in different ways, each of us has a different role to play,” Mr Fahour said.

While the prospectus offered cautious forecasts, Mr Fahour said there was “excitement” about its growth. Latitude on Wednesday also signed a deal with JB Hi-Fi to finance for purchases up to $1000 – on top of the longer-term products it already offers with the electronics retailer.

Mr Fahour said the upcoming float was a case of “apples and oranges” compared with 2019, when it was seeking to raise more than $1 billion at a time when foreign investors were cutting their exposure to Australian financial services companies.

The incentives for Mr Fahour, who holds equity in the company worth about $7 million, have also been changed since the 2019 float attempt. In 2019 Mr Fahour could have earned a “discretionary equity grant” if certain criteria were met following the listing, but this time he has purchased options that will break-even if the company’s value rises to $3.4 billion.

“The difference is this time around, I’ve just gone and bought a call option to demonstrate to everybody who cares to listen, I’m really excited about the future of this company and I think we’re going to add a lot of value, and I’m prepared to put my money in and be part of that,” Mr Fahour said.

The current investors, Latitude’s owners, KKR, Varde Partners and Deutsche Bank, will continue to own 66 per cent of the company.

Varde Partners, Deutsche Bank and US private equity giant KKR created Latitude in 2015 after they bought GE Capital Finance – the company behind consumer finance services such as Harvey Norman’s interest-free offers and credit cards – for $8.2 billion including debt.

The board is proposing to pay between 60 and 70 per cent of cash profits as a dividend and the said it intends to declare a dividend of 7.85¢a share for the half-year ending June 30.