Home » Markets » It’s five to midnight, again: US debt drama isn’t good for America, or the rest of us

It’s five to midnight, again: US debt drama isn’t good for America, or the rest of us

It says something disturbing about the state of US politics and governance that unless Congress comes up with another band-aid that defers the day of reckoning, the US government will run out of funding at 12.01am on Saturday morning.

Despite months of wrangling, Democrats and Republicans have been unable to agree on a deal to raise America’s anachronistic debt ceiling. Without a deal, the government will be unable to borrow funds and fund its agencies, pay its military or meet social welfare payments. 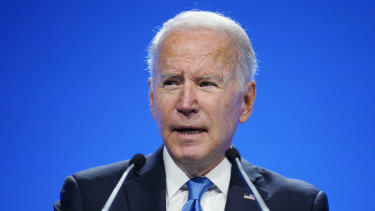 The grandstanding over the debt ceiling says a lot about the state of US politics and the challenges Joe Biden faces in trying to implement his agenda.Credit:AP

If a deal isn’t struck before midnight on Friday, those payments will force Treasury Secretary Janet Yellen to impose another set of “emergency” spending measures — on top of those that have been in place since October — before the government’s ability to pay its bills is finally exhausted on or about December 15.

If that were to occur, which is admittedly unlikely, it would be catastrophic for the US, and chaotic for the rest of the world.

Yellen has said a failure to raise the ceiling would “eviscerate” the US recovery from the pandemic, spread pain through the economy and throw America into a deep recession.

It would cause the US to default, albeit probably only technically and temporarily, on its debts for the first time, with implications for the US dollar’s pre-eminence as a global currency and for America’s cost of borrowing.

It almost certainly won’t come to that, but Congress is playing a dangerous game of chicken for purely partisan political purposes, with politics the reason neither party is willing to be seen to have blinked.

In October, Republican Senate minority leader Mitch McConnell did agree to stave of an imminent default by backing (and convincing 10 other Republicans in the Senate to support) an eleventh-hour measure that enabled the Biden administration to avoid disaster. That, however, didn’t resolve the issue. It merely bought some time – until now.

The deal averted a default, but drew the wrath of former president Donald Trump, who has been attacking McConnell and those who voted for the deal (in his usual colourful terms) for failing to use the debt ceiling impasse to “totally kill” the Democrats’ agenda.

The current debt ceiling, agreed as it has been more than 100 times since the Second World War with bi-partisan support, is $US28.4 trillion ($40 trillion). Much of the increase in government debt occurred during the Trump presidency, who inherited debt of just under $US20 trillion and saw it grow to more than $US27 trillion by the time he left office.

The debt ceiling applies to spending Congress has already approved, so the debate is not about the funding of President Joe Biden’s ambitious social and environmental agenda.

McConnell has been saying that there won’t be a government shutdown, even as he has maintained his position that the Republicans in the Senate would not support a permanent increase in the ceiling.

This week, the parties have been trying to patch together another short-term fix that would defer a shutdown of government services – and a permanent increase in the ceiling – until early next year. 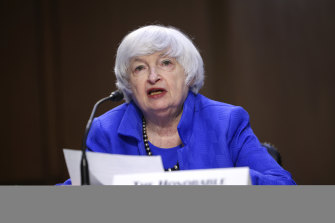 US Treasury Secretary Janet Yellen said a failure to raise the ceiling would “eviscerate” the US recovery from the pandemic and throw America into a deep recession.Credit:Getty

While that is the probable outcome, it has been complicated by attempts by some Republicans to tie their support to the blocking of the Biden administration’s mandating that employers it oversees have to ensure their workers are vaccinated or COVID-tested regularly.

There is another potential route to a postponement of the December 15 “X date”. That date is significant because there is a scheduled transfer of $US118 billion to the US Highway Trust Fund due on that day. The fund finances road construction and other transport-related projects from petrol excise revenues, with top-ups from the US Treasury.

Rather than handing over the $US118 billion as a lump sum, the Biden administration may be able to dole the money out over time, giving Congress more time to agree (or not agree) an increase in the ceiling.

It is also possible that the Democrats could use the cumbersome budget reconciliation process, which only requires a simple majority in the Senate, but (a) that would mean taking sole responsibility for the new debt ceiling and (b) there probably isn’t enough time left to do so.

It is bemusing that purely political theatre could push the US to the brink of a default on its debts and jeopardise its status as the world’s financial safe haven, with all the benefits – financial and hegemonic — that its privileged position confers.

The inability of this Congress to do what its predecessors, usually but not always routinely, have done on a bi-partisan basis for nearly three-quarters of a century underscores just how dysfunctional and poisonously partisan the US political system has become, even by the increasingly partisan US standards of the past.

There will be a “five minutes to midnight” fix that buys time to raise the debt ceiling. But the issue, the debates and the uncertainties – and risks for bondholders with maturing securities – will limp on into 2022.

That’s not good for America, or the rest of us.