IOOF to cull 140 advisers in next six to 12 months

Facebook has banned the sharing or viewing of our news articles on its platform. For independent journalism straight from the source, download our app and sign up to our newsletters.

Wealth giant IOOF plans to sack 140 financial advisers from its network in the next six to 12 months as part of its strategy to become the country’s cheapest and largest provider of financial advice.

The cull comes as the company reported its half-year results on Wednesday, saying statutory profits almost doubled to $54.5 million and total funds under management rose 39 per cent to $204.3 billion compared to the same time last year.

IOOF committed to paying shareholders an interim dividend of 11.5 cents per share, triggering a more than 6 per cent share price jump in morning trade. 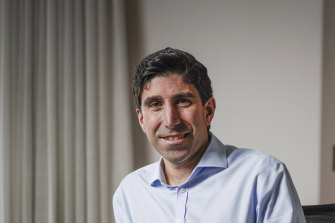 IOOF chief executive Renato Mota has announced 140 financial advisers will be culled in the next six to 12 months. Credit:Eamon Gallagher

Chief executive Renato Mota said the “strong result” was evidence the company’s strategy to restructure its financial advice sector and achieve scale through acquisitions was working, but there was still work to do.

“We need to be really disciplined in which advisers do we chose to partner with,” he said. “Historically where we’ve supported or cross-subsidised advisers that are not economic or sustainable in their own right, this is not something we will continue to do going forward.”

Mr Mota said the self-employed model “needs to be reinvented” to become more economically sustainable, and thus would be where the 140 advisers would be culled.

“It’s responsible for the vast bulk of our financial advisers yet represents a much smaller part of our gross margin from the segment,” he said. “This points to the sustainability challenge which cannot continue.”

Mr Mota said the company would seek out advisers who adhere to IOOF’s new governance standards and do not require additional funding from the company.

“Adviser numbers of themselves are not a key metric of success. It’s about ensuring we have the right advisers and we have a business that is attracting like-minded advisers into our network,” he said.

IOOF also provided an update on its acquisitions after announcing its $1.4 billion bid to take over NAB’s wealth business MLC last August.

The takeover was approved by the Australian Competition and Consumer Commission in December and NAB’s superannuation trustee determined the merger was in the best interests of members last Friday.

Mr Mota said the approvals would pave the way for the financial regulator – the Australian Prudential Regulation Authority – to clear the deal. The acquisition is on track to be completed by June this year, he added.

IOOF reported no increase to its total remediation bill after paying out $9.3 million during the half for prior misconduct, with $5.3 million in program costs incurred.