Banking challenger ING has reported a spike in profit largely driven by a growing customer base and diversification of product offerings.

ING reported a 9.7 per cent increase in statutory net profit after tax at its annual results on Tuesday, in part driven by a 30 per cent growth in customers using ING as their main banking service. 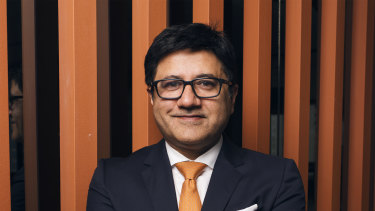 ING chief Uday Sareen says the bank is the “lead challenger” to the big four in Australia.Credit: James Brickwood

ING chief Uday Sareen said ING would consider extending its services to wealth management, but that it was a medium to long-term priority.

"That would definitely be an opportunity going forward. If there are over 250,000 customers with over $250,000 with us and they have this need … It is an opportunity for us to consider," he said.

"But right now, clearly our focus is to further consolidate as we complete our product suite."

Australians become introduced to ING when they travelled, Mr Sareen said, and would get lured in by the low rates and digital focus. "You can travel all over the world and you don't have to pay any sort of international fees … You come and test, experience and sign up."

Over the year, ING invested $125 million in a "technology transformation" including enhancements to the mobile app and the use of robotics and artificial intelligence to speed up processing and approvals times for mortgage and consumer lending applications. Mr Sareen said the bank's digital focus was at the core of what differentiates it from the big four.

"Almost a third of our customers come to us from referrals from friends and family. We do what we say and we say what we do in terms of experience," Mr Sareen said.

ING has around five per cent of the market share and Mr Sareen acknowledged the bank had "a long way to go" as it battles the big four.

"When customers open accounts with us, they're coming to us from some of the other players," Mr Sareen said.

"I think we're definitely the lead challenger in Australia and we are an alternative to the big banks."

In September, ING pledged to stop all lending to thermal coal companies by 2025. The annual results highlight the bank invested $800 million in renewable energy projects, including a solar farm in NSW's Wellington and a wind farm in South Australia. Mr Sareen said it was an important part of the bank's brand.

He also said it was too soon to feel any material impacts of coronavirus as other lenders fear a wave of defaults triggered by uncertainty in the market and plummeting stock prices. While ING's focus was on limiting travel and following health protocols, he said ING was not immune to the fallout from the virus. "We are at the end of the day a bank and part of the ecosystem and banking is a fairly representative sector of what happens in the economy."