Home » Markets » I was addicted to Robinhood and r/WallStreetBets. I spiraled out of control, wiped out my $70,000 savings, and contemplated suicide. Here's my message to Robinhood and new investors.

Editor’s note: The author is a 27-year-old male from California. We have chosen to publish this as an anonymous op-ed. A Robinhood spokesperson responded with comment and we have published the response in full below.

I have an addictive personality. When I was younger I frequently played video games for up to 12 hours at a time. I later binged other hobbies: golf, cycling, cooking, even reading. However, my most self-destructive foray was into the world of Robinhood, r/WallStreetBets, and day trading.

Despite my obsessive personality, I’ve had moments of sound, cogent decision making. When I graduated from college, I learned how to invest the proper way. That is, dollar cost averaging into a Roth IRA, into a mix of diversified index funds, that track well known indices like the S&P 500. I made a conscious decision to live a frugal lifestyle to save aggressively to secure my future.

However, r/WallStreetBets (WSB) popped onto my feed in mid-January 2020, and I started trading options with small amounts on Robinhood.

I haphazardly fell into the community, like a kid who finds himself hanging out with the wrong crowd at school.

Hanging out with the wrong crowd was fun at first, until I found myself caught up in a string of bad decisions, shame, and regret. I had zero experience trading options, and in hindsight, Robinhood approved me fast — remarkably fast — for options trading.

Options are popular on WSB, because leveraged trades can result in getting very rich very quickly. I also later learned that options can also result in becoming very poor very quickly, especially for the ignorant and uninformed.

I went through the same thought process that I’m sure others went through: “Okay, I’ll just trade with $300, and if I lose it, then I’m completely done,” or, “I’ll start with this much money, and will withdraw my initial investment, so I’ll never risk more than I put in.”

It was exciting to be making money, and Robinhood would flash with confetti every time I made a trade, and congratulate me on using the app. Not only was it exciting, but it was also addictive. I was picking up my phone to check my account several hundred times a day. It was very stimulating, in the same way video games are stimulating.

After some early successes (50-100% gains on small bets), I grew frustrated by what I saw on WSB; people posted about how they were making $10,000 gains, making tremendous amounts of money, some even over $400,000 tax free in a Roth IRA. My brain was scattered, I’d check my phone over 500 times a day, and I became jealous of others making so much money.

And then I did the unimaginable.

I enabled options trading in my Vanguard Roth IRA, where my six years of saving aggressively was — all $45,000. I was convinced that I, too, could make something on the scale of a $400,000 tax free gain.

Vanguard, in comparison to Robinhood, does not make investing look exciting or flashy. Their interface looks something like Craigslist and it’s meant to be functional, with the long-term view in mind.

But in February, I wasn’t thinking rationally. I was constantly stimulated by Robinhood, completely addicted to the app, and I was foaming at the mouth at those 6-figure gains posts. Though I started investing through Robinhood, I began trading in my tax-sheltered IRA, as other Redditors were doing. My initial successes made me confident that I, too, could be like these folks, and so I strayed from my initial “plan” and starting scaling into larger and larger bets. 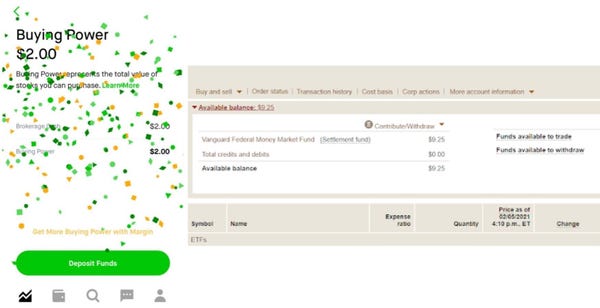 In mid- to late February 2020, on the advice of the herd at WSB, I shorted the stock market by purchasing puts against broad market indices, like the S&P 500. Puts are leveraged options contracts that increase in value if the underlying security decreases in value. Basically, if the market fell, I would make a lot of money.

And I did make a lot of money.

The market dropped precipitously in late February and March. I bought roughly $4,000 worth of puts at first. My $4,000 bet quickly grew to over $20,000 in value. This was a life changing sum of money for me.

But I was still jealous.

Others were making more than I was on WSB. Greed, my addiction to Robinhood, and the power of the WSB herd took control of my life.

The market kept falling and I continued to chase the trade. I increased the amount of my short position in both my Robinhood and Vanguard accounts, to the point where 90% of my net worth was tied up shorting the market. I more than doubled my net worth, and in just three weeks, I made over $70,000.

I felt elated because I suddenly was one of those successful WSB Redditors.

The hubris that comes with making this much money that fast, planted in an addicted mind that had not been firing properly for the past two months, is hard to explain. I felt invincible. I felt like I couldn’t be wrong. The market, I thought, would keep dropping and I would keep racking in gains.

This did not happen. 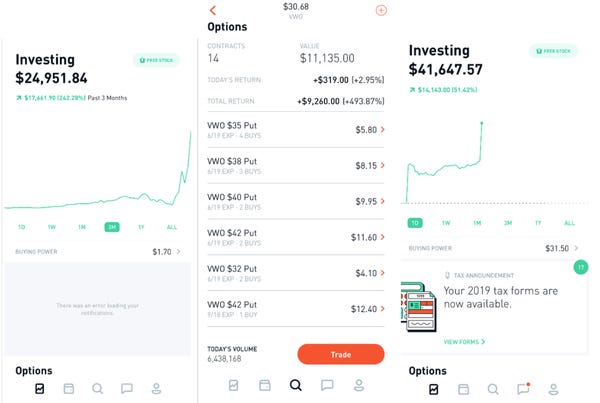 This was just as the stock market came roaring back after the March 23rd low.

My initial successes still kept me feeling confident that I was on the right side of the trade, and I held my short position. “Diamond hands” as they would say on WSB.

With work postponed because of the pandemic, I clocked at least 12-15 hours a day on my phone, glued to Robinhood and WSB, frantically reading posts as an act of confirmation bias written by people that had similar views on the market as me. I became desperate as time went on and as my losses amounted. I tried other risky trading strategies, I kept losing more, I stopped sleeping, and I started drinking heavily.

Just like the 20-year-old Robinhood trader that killed himself in June 2020, I thought of doing the same. I’m a public school teacher; I’m supposed to be a paragon in my community. I never could have imagined that this would be a chapter in my life.

Fortunately, I’m on a path to recovery. I’m lucky to have quality health insurance and I’m working with a psychiatrist and a therapist to put this behind me.

Though it’s difficult for me to discuss this part of my life, I wanted my story to serve as a cautionary tale, to be the example that’s read so that it doesn’t have to be lived.

Though a select few do make money on WSB, by and large the majority of people lose money, or at the least, fail to beat the S&P 500. And though Robinhood’s tagline is “Investing for Everyone,” I believe that it steers its investors toward poor investment practices, which ultimately is bad for just about everyone.

Reflecting back on this time of my life, here’s where I feel Robinhood misguided me.

When signing up for Robinhood, or when referred by other users, they use tactics designed to suck people in and keep them trading. New users are given the option of selecting one free stock, of three mystery stocks presented, that could be worth “anywhere between $3 and $225” in value. So the introduction to Robinhood, and to investing in general for many users, is akin to gambling. They bait people with free “scratch off” stock programs, similar to scratch off lottery tickets purchased at convenience stores.

Should this be the first message about investing that novice investors receive when they sign up for Robinhood, that investing is like gambling? This scratch off stock program is a variable reward, too — a person could win more or they could win less, analogous in part to variable ratio schedules used by slot machines in casinos.

Active trading is an unsuccessful endeavor for most people.

According to James Royal, Ph.D., roughly “83% to 95% of active money managers fail to beat their benchmark’s return in any given year.” That’s why the adage, time in the market matters more than timing the market, is so prolific among passive investors. Because passive investing, with the long game in mind, is more likely to be successful.

But Robinhood has a vested interest to keep people trading and trading frequently. They generate hundreds of millions of dollars “as payment for order flow” to firms; in short, the more that users pull the lever and actively trade, despite it being poor practice for most retail investors, the more that Robinhood profits. I was deeply angered and saddened to learn this, to discover the forces at play within Robinhood working against the interests of their clients.

I made bad decisions, and as a matter of personal responsibility, I own them. However, I recently learned that I have a mental health condition that’s gone undiagnosed for all of my life, and it was all too easy for me to fall prey to the stimulating nature of Robinhood and WSB. Together, these two platforms can cause significant damage to the vulnerable, and I’m sure there are many that have a similar story as me.

Despite the headlines that first appeared, I’m not convinced that this should be painted as a democratic, Reddit-led French Revolution-esque moment against hedge funds. There may be some element of this, but ultimately hedge funds will be able to absorb whatever losses they incurred from this incident and will go back to their mansions, drinking their fine wines and eating their lobsters. They will still live out their lives at the top of the social ladder.

On the flipside, thousands and thousands of retail traders lost tremendous amounts of money, and are currently experiencing much of what I experienced when I started trading.

With the way that many media outlets, and even some politicians, covered this event, they revered WSB traders and by proxy granted permission to everyone, including the financially destitute who may not have money to lose, to risk what little money they had in hopes of striking it rich. Many fell to the plights of gambling in chasing GameStop, and I hope that gambling in the financial markets does not ascend in the public consciousness as a worthwhile and even noble pursuit.

It’s by far the worst thing that I have ever done.

Here are final takeaways I have for Robinhood and for new investors.

Full comment from Robinhood: “We built Robinhood to be a self-directed platform for customers to learn and to invest responsibly. We continue to invest in informational and educational resources to help customers learn about the markets and make informed decisions for their personal investment goals.”