‘Genuine gold medal contender’: Afterpay gets $39b endorsement from US giant Square

A 31-year old entrepreneur from Sydney’s eastern surburbs has capped an extraordinary rise after agreeing to sell the payments firm he founded less than a decade ago, Afterpay, to US financial technology giant Square for $US29 billion ($39 billion).

Nick Molnar, a graduate of Moriah College and Sydney University, developed the idea for Afterpay together with a neighbour in Rose Bay, investment banker Anthony Eisen, after the two met in 2012. The business Afterpay was founded in 2014. In the biggest corporate deal in Australian history, the duo agreed on Monday to sell the business to Square, which is led by Twitter founder and billionaire Jack Dorsey. 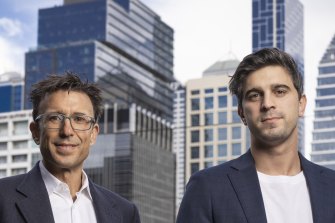 In striking the deal, the two Australians cemented their status as the nation’s biggest winners to date from the technological revolution sweeping through finance.

The deal also caps a remarkable journey for Afterpay, a company that has helped to launch a multi-billion dollar industry and cultural phenomenon by targeting millennial consumers with short-term instalment loans that do not charge interest.

Venture capitalist Mark Carnegie said the deal, which will result in Square shares also being listed on the ASX, should put to bed any notion Australia lacked high-quality technology entrepreneurs.

“Australian shareholders are now going to own a quarter one of the great fintech businesses in the world and a genuine world-changing business,” Mr Carnegie said of Square.

The offer values Mr Molnar and Mr Eisen’s stakes in Afterpay at about $2.6 billion each, an amount to be paid in shares of Square.

“This thing is a genuine gold medal contender to be one of the game-changing financial services platforms, to be the next PayPal or the PayPal of 2030,” said Mr Carnegie of Square.

Mr Molnar on Monday said he and Mr Eisen had long admired Square, which is also setting out to shake up banking, and the takeover would turbocharge Afterpay’s US growth.

“I couldn’t tell you who approached who, it was such a natural progression of conversations as we got to know one another, and it’s really exciting to reach this milestone on what the future holds,” he said of the deal with Square, speaking from Los Angeles

Afterpay competes with credit cards by allowing customers to make purchases with borrowed money, which can be repaid over four fortnightly interest-free instalments. There are fees for being late, and the model has attracted criticism from consumer groups and scrutiny from regulators, because customers do not need to undergo a credit check.

Even so, the company has proven a hit with sharemarket investors, and the business received an enormous boost from COVID-19, which sparked a surge in online shopping and digital payments.

Afterpay shares on Monday surged 19 per cent to $114.80 in response to the deal, which has the backing of Afterpay’s board but will be subject to a vote from shareholders and approval from regulators. The stock traded as low as $8.01 in March last year as concerns about the impact of COVID-19 smashed global markets.

The deal is expected to be approved by regulators, though NSW Liberal Senator Andrew Bragg expressed concerns about the consolidation among big technology players, payments firms, and financial services providers.

Mr Molnar, who has been described as a serial entrepreneur, attended Moriah College in Queens Park, and before launching Afterpay he started an online jewellery business. Mr Eisen, who is now based in Melbourne, comes from a finance background and worked investment banking before starting the business.

James Cameron, partner at investment firm Airtree Ventures,said the deal was a key moment for Australia’s technology sector, adding that tales of founders making their fortunes inspired others to try their hand at being an entrepreneur.

“These are the sort of stories that are creating thousands more start-ups that have come through the next generation,” Mr Cameron said.

Mr Cameron said that whatever one thought of the Afterpay product itself, it was a “genuine innovation” that had taken off globally, and helped to put Australia’s technology sector on the map.

“The innovation did come from Australia, and this is the model that people are copying. It puts the Australian ecosystem even more squarely on the map,” Mr Cameron said.