Afterpay will target younger shoppers by offering fee-free bank accounts that pay an interest rate of 1 per cent on savings from October, as it steps up its competition with established banks.

After striking a deal with Westpac last year to offer Afterpay-branded bank accounts, the company on Tuesday unveiled new details about its banking app, which will begin with savings and transaction accounts. 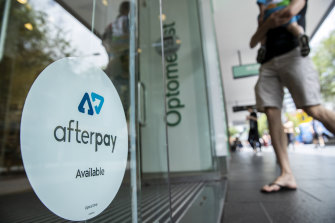 Customers will need an Afterpay account to open a bank account through the service, and the company hopes the push into mainstream banking will strengthen its already dominant position in Australia’s booming BNPL market.Credit:Louie Douvis

Under a deal that allows Afterpay to use Westpac’s banking licence and infrastructure, it will offer customers up to 15 savings accounts that can be linked to specific goals, with interest rates of 1 per cent.

The banking foray comes as BNPL operators face growing competition from giants including PayPal, Commonwealth Bank, and potentially Apple, pressuring them to find points of difference and other revenue streams.

Executive vice president for new platforms Lee Hatton said the company had developed its “money and lifestyle” app for generation Z and millennials who had no interest in entering bank branches. “We are going to watch a generational shift in the way that financial services works,” she said.

Analysts have predicted Afterpay could ultimately use the banking app to refer customers for mortgages, or allow users to trade shares of cryptocurrencies, and Morgan Stanley recently predicted the app could near double Afterpay’s Australian revenue.

Ms Hatton said Afterpay’s app would not offer interest-bearing products, saying that if it were to refer customers for home loans, the products would not be sold under the Afterpay brand.

“We could perhaps create an ecosystem for them in order to find them a great offer… I think that’s a natural evolution for this customer base, absolutely, but not one that we’ve solved just yet,” she said.

Ms Hatton did not rule out offering cryptocurrency trading at some point, either.

“I would have to say that because we are a next generation company, we are always going to have those things on our radar as a potential opportunity,” she said. 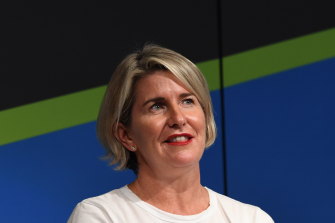 Aferpay’s Lee Hatton: “”We are going to watch a generational shift in the way that financial services works.” Credit:Louise Kennerley

Ms Hatton has previously indicated it could enter business banking at a later date as well.

The app will be tested with Afterpay staff later this month before being publicly launched in October. It will not initially be profitable and Ms Hatton said its key goal was growth, adding that it would target the 3 million customers already using Afterpay.

Customers will need an Afterpay account to open a bank account through the service, and the company hopes the push into mainstream banking will strengthen its already dominant position in Australia’s booming BNPL market.

Australia is seen as one of the most “mature” BNPL markets in the world, which means Afterpay can use it as a testing ground for moves that could be rolled out in other countries at a later date. Ms Hatton indicated it was thinking about similar moves into banking overseas, but stressed every banking market was different. “Everything we do, we think about it globally,” she said.