After months of silence, GameStop executives are scheduled to finally speak publicly on Tuesday afternoon for the company’s fourth-quarter earnings.

GameStop is expected to report better-than-average results due to the pandemic forcing millions of people indoors and the launch of two major new PlayStation and Xbox game consoles.

Though a positive earnings report could be a critical win for a retailer that’s struggled to adapt to an increasingly digital marketplace for games, it’s set to be overshadowed by the ongoing short squeeze that’s seen GameStop stock explode, according to analysts.

“The high-profile sustained short squeeze seen in recent months has spiked the share price to levels that are completely disconnected from the fundamentals of the business,” Wedbush analysts wrote in their GameStop earnings preview. “As a result, we are unwilling to recommend the shares to investors.”

Wedbush isn’t alone in that assessment: None of the analysts covering GameStop recommend buying the company’s stock at its current price.

As of Tuesday morning, GameStop’s stock value was just shy of $200 per share — more than double the company’s all-time high.

It’s unclear when that short squeeze will end, but when it does analysts are targeting $30 per share and below.

“We expected shorts to abandon GameStop following significant losses on the short side, and were hopeful that shares would return to a more fundamental value prior to earnings,” the Wedbush note said. “That has as yet to happen.”

Beyond addressing the short squeeze and its impact on the company long-term, GameStop execs are expected to further detail the company’s “transformation” plans led by activist investor and board member Ryan Cohen. 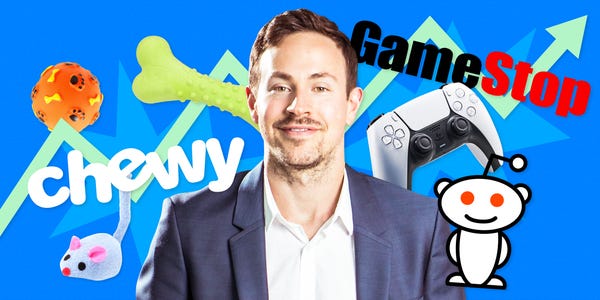 Cohen’s investment firm, RC Ventures, owns 12.9% of GameStop. That stake makes it the second-largest single shareholder of GameStop, and he sits on the board alongside two colleagues from his former gig running Chewy.

Cohen is in charge of a new committee at GameStop that intends to, “identify initiatives that can further accelerate the company’s transformation.” The “Strategic Planning and Capital Allocation Committee” is tasked with “identifying actions that can transform GameStop into a technology business and help create enduring value for stockholders,” GameStop said in a press release on March 8.

What that “transformation” plans means for the company remains to be seen, and is one of the big questions hanging over this afternoon’s earnings call.

Ahead of the earnings call, GameStop announced yet another executive departure: Chief Customer Officer Frank Hamlin is resigning from the company. He’s following CFO Jim Bell out the door on March 31. The c-suite changes have been repeatedly attributed to Cohen’s “transformation” plans, and Bell was reportedly pushed to resign by the company’s board.

Regardless, Wall Street is clearly interested in Cohen’s potential impact: His involvement with the company sparked a stock price rise in late 2020 and early 2021, just before the company faced a short squeeze driven by retail investors.

“He obviously has plans to make them relevant and to keep them relevant,” Wedbush analyst Michael Pachter told Insider, “but he hasn’t shared those plans with any of us yet.”

Got a tip? Contact Insider senior correspondent Ben Gilbert via email (bgilbert@insider.com), or Twitter DM (@realbengilbert). We can keep sources anonymous. Use a non-work device to reach out. PR pitches by email only, please.