Future Fund chairman Peter Costello has highlighted investor concerns that any rise in inflation could push up interest rates from record lows, as booming markets drove the fund’s total assets to a record of $179 billion.

In an update on Thursday the taxpayer-owned fund notched up 10.1 per cent returns for the year to March and 4.5 per cent over the quarter, as global sharemarkets powered ahead. Despite the bounce, however, the fund reiterated its cautious stance, pointing to challenges ahead as governments unwind extraordinary stimulus policies that have inflated asset prices. 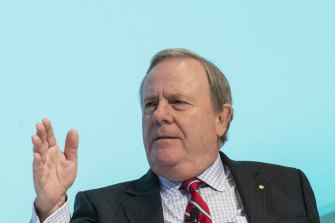 Chairman Peter Costello said the outlook was “greatly improved” from the depths of last year, but also pointed to a number of risks including the possibility of global setbacks, and the concern in financial markets about the risk of inflation sparking higher borrowing costs.

“With interest rates at historically low levels, markets are very sensitive to any prospect of inflation and rising rates as a consequence,” said Mr Costello, who is also chairman of this masthead’s owner, Nine Entertainment.

“The board recognises that the investment challenge ahead is significant and is continuing to assess and position the portfolio to generate mandated long-term returns while managing risk.”

Australia’s inflation reading of just 0.6 per cent for the March quarter, revealed on Wednesday, was surprisingly low. Even so, there remains a concern among investors that higher inflation could mean interest rates end up being raised from 0.1 per cent earlier than the 2024 target flagged by the Reserve Bank.

The assumption interest rates will remain near zero for years to come is one reason why share prices have bounced back so strongly from the coronavirus crisis, despite ongoing economic weakness.

Future Fund chief executive Raphael Arndt said the fund was targeting “neutral” risk levels across its portfolios, and said that while many economies had recovered, others remained susceptible to further shocks.

“Policy settings continue to support markets but this is priced into assets and unwinding these measures will be a delicate exercise,” Dr Arndt said.

Over 10 years, the Future Fund reported returns of 9.1 per cent a year, compared with its target of 6.1 per cent. Even so, the latest returns also showed the fund was lagging behind super funds over the much shorter term.

In contrast, the fund’s returns were higher than a balanced fund’s return when measured over three, five, seven and 10 years.

Dr Arndt said the fund had performed well in the downturn, which meant its recovery was starting from a higher base. “The Fund is designed to show resilience through the cycle,” he said.

A concise wrap of the day on the markets, breaking business news and expert opinion delivered to your inbox each afternoon. Sign up  Here.