Dividend tax trades, which involved dozen of banks including Macquarie Bank, have been blamed for costing German taxpayers billions of euros, were illegal and can be punished as crimes, the country’s top criminal court ruled.

In the first case about the controversial cum-ex tax strategy to reach the top tribunal, the Federal Court of Justice backed the conviction last year of two former London investment bankers, according to the verdict Wednesday in Karlsruhe. The judges also upheld the seizure of €176 million ($283 million) from M.M. Warburg Group, the profit that the private lender made from these transactions.

“This was no loophole,” Rolf Raum, the presiding judge, said in explaining the verdict. “It was a blatant grab from the bag that holds all taxpayers’ contributions.” 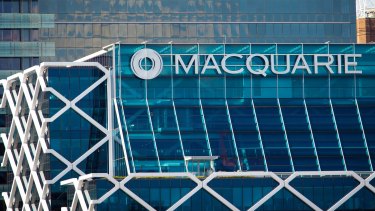 Macquarie Bank is being investigated by German authorities in relation to a share trading practice banking on dividend tax refunds to boost returns.Credit:Ian Waldie

Throwing out the appeal boosts the prospects of probes still pending into more than 1000 suspects and dozens of banks across the global financial industry that prosecutors say benefited from the trades. The scandal has engulfed large parts of the finance sector because setting up the transactions required the help of multiple players, from traders to brokers to lawyers.

Macquarie in 2018 revealed up to 30 of its staff, including chief executive Shemara Wikramanayake and former CEO Nicholas Moore, had been named “suspects” as part of the German investigation into 2011 loans to hedge funds using a complex dividend-trading strategy.

The bank told shareholders at its annual general meeting on Thursday that “in total, the German authorities have designated as suspects approximately 100 current and former Macquarie staff, most of whom are no longer at Macquarie. The total amount at issue is not material and [the company] has provided for the matter.”

In Cum-Ex deals — named after the Latin terms for with-without — shares rapidly changed hands to earn duplicate refunds on dividend tax. German politicians estimate that the scheme may have cost taxpayers more than €10 billion by the time Germany revised the rules in 2012 to close down the practice.

This week’s top court finding in Germany is the first time top judges ruled on the legality of the trades. The case targeted the verdict that a court in Bonn issued in March 2020, when the tribunal convicted two former London investment bankers, Martin Shields and Nicholas Diable. Both avoided jail time by cooperating with prosecutors. They were on trial for what the charges said amounted to a €400 million tax evasion.

The Karlsruhe ruling comes as German finance daily Handelsblatt reported that a group of 20 wealthy investors had an important first win in its battle against Macquarie Bank to receive €30 million in damages in relation to such trades. A Munich court determined this week that the lawsuit will have to be fought in Germany rather than in Britain or Australia, where the investors would have faced higher litigation costs and potentially lower prospects of success.

The investors claim that Macquarie made €75 million in profits from cum-ex deals in 2011, lending them €3.3 billion to provide them with leverage for the controversial share trades as the last lender still dabbling in the practice. As the German government closed all loopholes around the trading practice and the cum-ex deal fell through without the expected double-digit returns, the Australian bank demanded repayment of the loans plus interest, fees and provisions, the claimants say, according to the report.

The investors allege they had never been made aware that their expected gains were to come from German tax refunds – a claim they will have to prove in front of a court in Munich, where Macquarie managers are alleged to have organised the trades, Handelsblatt says.

Macquarie said in an emailed statement on Thursday it “strongly disputes this claim, noting that it did not arrange, advise or otherwise engage with the investors, who were high net-worth individuals with their own advisers. Many, if not all, had previously participated in similar transactions.”

In the Bonn conviction of the two former London investment bankers, Shields got a suspended sentence of one year and 10 months and was ordered to repay €14 million. He accepted his conviction but asked the appeals judges to overturn the seizure of the money. Diable, who was acquitted from some parts of the charges, received a one-year term that was also suspended. He appealed his conviction.

Warburg told the top judges at a hearing in the case in June that it was unfairly turned into a scapegoat in the Cum-Ex affair. The German lender sought to overturn the seizure of the profit that it reaped, according to the Bonn verdict.

In a statement following this week’s Karlsruhe verdict, the Hamburg-based bank said it was “disappointed” by the outcome and that it hadn’t been given a fair chance to defend itself the seizure of the money. Warburg will now consider its next legal steps, it said.

Prosecutors had appealed to make the court change some technical language in the verdict on how profits can be seized from individuals involved in the trades. The Bonn ruling allowed prosecutors to go after profits of any participant only until they have recouped the total tax loss in the case. Instead, prosecutors wanted to be able to target anything a perpetrator received, without regard for that limit.