Listed companies have been granted more leeway to conduct emergency capital raisings, as investors brace for revenue-starved businesses to tap the market for new equity.

The stock exchange operator, ASX Limited, on Tuesday night lifted its limit on how much new equity larger companies can raise from investors in a placement. 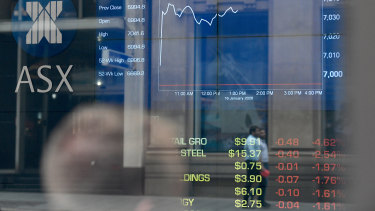 The ASX will provide temporary relief for emergency capital raisings.Credit:AAP

It will also allow trading halts of up to four days, up from two previously, to give companies, boards and investors more time to assess the impact of the coronavirus outbreak on their business before conducting a raising.

Until now, only small-cap companies were able to issue up to 25 per cent of their market capitalisation in a placement, and such a move had to be approved by a shareholder vote.

Now, the ASX has said all companies will be able to raise up to 25 per cent of their market capitalisation on the condition they also run a share purchase plan for retail shareholders.

The temporary measures, which will be in place until the end of July, come as the Australian Securities and Investments Commission (ASIC) on Tuesday said it would temporarily be less stringent towards companies making "low doc" capital raisings.

ASX Limited's executive general manager of listings and issuer services, Max Cunningham, said the new limit on placement size was not put in place during the global financial crisis, because of the different circumstances at the time.

While capital raisings in the GFC were largely driven by credit markets seizing up, social distancing has meant companies across a range of sectors have suddenly seen their revenue plummet. Investors are also keen to avoid the need for repeat capital raisings by the same company.

“What we have here is companies that are having their revenue fall by 100 per cent, to zero, for a forseeable future,” he said.

“The message we’re getting from the Street is if you’re doing a recapitalisation, we don’t want to be giving you enough money to fund you for a quarter when this could go on for three quarters.”

Companies that have launched capital raisings since the coronavirus crisis erupted include Cochlear, retailer Kathmandu and Webjet, and fund managers say there are likely to be more companies following suit in coming months.

Managing director of White Funds Management Angus Gluskie said the companies that were most likely to raise capital would be highly leveraged businesses, those facing liquidity problems and potentially, regulated institutions such as banks.

"From what we can see of discussions between companies and banks, the banks appear to be understanding about the circumstances. Notwithstanding that, companies may feel it's prudent to top up their capital," Mr Gluskie said.

Chief investment officer at Atlas Funds Management High Dive said companies were generally less reliant on short-term debt funding than 12 years ago, and banks were being more supportive of corporate borrowers than during the GFC. "We're not going to see the flood that we faced 12 years ago because the structure of the debt of these companies is different," Mr Dive said.

Under ASIC's changes, companies whose shares have been suspended for up to 10 days in the previous year will be able to conduct "low doc" capital raisings, including rights offers, placements and share purchase plans. Previously, low-doc raisings were only available to companies that had been suspended for up to five days in the previous 12 months.