Investors of fallen neobank Xinja have been threatened with imprisonment if they fail to hand over books, records and correspondence related to the company’s capital raising tactics as part of a wide-ranging investigation secretly launched by the prudential regulator. 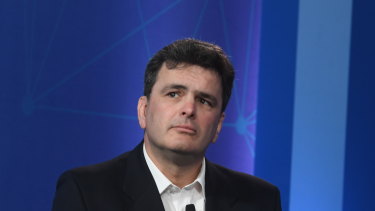 APRA has ordered investors to hand over all correspondence with Xinja founder Eric Wilson as part of an investigation.Credit:Peter Braig

The regulator has sent notices to a number of investment firms ordering them to produce all financial statements, notes and correspondence with Xinja employees and associates, singling out founder Eric Wilson and non-executive director Craig Swanger in one letter.

Xinja became the first Australian bank to return all customer deposits in January, after it failed to raise enough money to continue operating above APRA’s minimum capital requirements. APRA chair Wayne Byres called the process a “successful failure” in March, despite the thousands of Australians left blindsided and empty-handed.

APRA’s notice, obtained by this masthead, is seeking documents related to “referrer agreements” and “subscription agreements” used by Xinja to raise funds. The regulator is looking for evidence of payments or introductions made to investors and is seeking paper trails related to any funding-related meetings.

A note attached to the letter warns if the recipient conceals, destroys, mutilates or alters any of the requested documents, they face up to two years’ imprisonment. Recipients were given two weeks to respond and were told to provide documents either digitally through an encrypted service or physically by delivering a USB to APRA’s Sydney office.

A spokeswoman for the company, now named Techstacked, said the former entity and its directors were “cooperating with APRA on an investigation into prudential matters that follow the company voluntarily handing back its banking licence”.

“Neither the former Xinja entity nor Techstacked have raised any capital since the ADI licence was handed back to APRA.”

Xinja was founded in 2017 and obtained a banking license two years later. The digital bank quickly attracted more than 40,000 customers by offering high interest deposit accounts but without any revenue-generating products, like loans, the company quickly burnt through capital.

Auditors had repeatedly warned Xinja was at risk of breaching its legal requirements to operate and was dependent on raising fresh capital. Xinja’s most recent auditors, PwC, resigned in June, according to recent corporate filings.

“Our auditing needs are different now that we are no longer in retail banking. The change was made by agreement with PwC as part of an orderly transition to a more suitable auditor for a company of our size and scale,” a Techstacked spokeswoman said.

The scope of APRA’s investigation includes the period in which Xinja announced it had secured a $433 million deal with the Middle Eastern group, World Investments, that was branded as the “largest single investment in an Australian neobank or start-up”.

The Age and Sydney Morning Herald reported in January the contract with World Investments was highly conditional, despite Xinja claiming $160 million would be transferred “immediately” and spruiking the deal to potential investors. The deal was brokered by Byron Bay-based consultant Michael Gale, who has a string of soured business deals behind him. Mr Gale said he had not been informed by APRA about its investigation.

The World Investments money never materialised and Xinja’s investors were told on New Year’s Eve their shares could be worthless. The company initially sought to raise an additional $5 million to fund a US share trading platform but later abandoned this venture and pledged to pursue a lower public profile under its new name.

Once Xinja announced plans to return its banking license, Mr Gale said World Investments offered to “save the bank” by acquiring a majority stake in the company but was not able to obtain the necessary regulatory approvals, which terminated negotiations.

APRA responded to the collapse by raising the bar for new entrants by mandating higher capital requirements and forcing companies to establish plans to launch revenue-generating products.

One source familiar with APRA’s investigation, who declined to be named because they were discussing sensitive matters, said there remained a “lack of clarity” around Xinja’s demise.

“There’s been very little information apart from when they said they’re stepping away from banking, it seemed really sudden,” the source said. “It’s hard to know where the investigation will go but I hope it determines if anything untoward went on.”

Under law, APRA can appoint a person to investigate and report on “prudential matters” which includes the impact of a company on the stability of Australia’s financial system or failure to keep the company in a sound financial position. Mr Davies was formerly a director at liquidators KordaMentha and an investigator for the Australian Securities and Investments Commission. APRA declined to comment.