No billionaires in Brioni tuck into the gravy-drenched roast beef sandwich at the Diner. No dark-windowed Escalades cruise past the Child’s Play Store, where the owner sports a pin that proclaims her a “glow getter.” 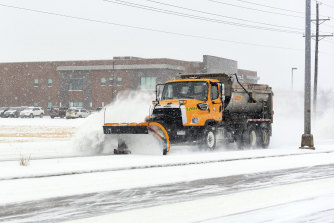 South Dakota holds $US500 billion ($674 billion) of wealth in trusts. A significant chunk has its legal home at one of the more than 50 chartered trust companies in Sioux Falls.Credit:AP

Yet the money is here, mind-boggling sums of it, along this avenue in South Dakota, as the wider world discovered one sunny Sunday in October.

Somehow, millions of private financial records — known as the Pandora Papers — had landed in the hands of journalists. They laid out how wealthy and powerful people with chequered pasts exploit the US financial system to store assets. One of their favourite spots: Sioux Falls.

State data show South Dakota holds $US500 billion ($674 billion) of wealth in trusts. A significant chunk has its legal home at one of the more than 50 chartered trust companies headquartered within a block or two of this strip of Phillips Avenue.

Many outsiders were taken aback. Was South Dakota — a state home to less than 1 million people and hardly accustomed to a second glance, if even a first one — really a financial haven for the rich?

“We’re the Cayman Islands of the prairie,” quipped Cory Heidelberger, 50, a progressive blogger who has criticised his state’s expansive laws for trusts and twice run for the State Senate as a Democrat, and failed.

But ask the office workers trickling through downtown at lunchtime about the state’s role in the business of wealth and you’ll be met with either stares of confusion or impenetrable silence.

Tom Simmons, a trusts and estates lawyer who teaches at the University of South Dakota about an hour’s drive away, says he’s not surprised. In his estimate, only a few hundred people here — lawyers, trust company officers, bank staff — work directly in the trust business. They know. Most of the rest don’t.

Simmons is among the former. He’s part of a gubernatorial task force of industry experts formed to make South Dakota the top trust jurisdiction in the US In short: the group recommends which laws should be enacted, and the legislature then decides. 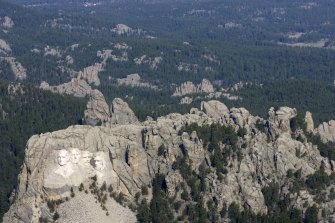 South Dakota is more well-known as being the home of Mount Rushmore.Credit:AP

Around four decades ago, the state adopted a few key laws that caught the financial industry’s attention. One eliminated the cap on interest rates for lending. Another allowed trusts to last forever — so-called dynasty trusts. The latter, coupled with the state’s zero income tax, made South Dakota an attractive spot for anyone wanting to pass assets to future generations without triggering estate taxes. Since then, the legal latitude for trusts has gradually been extended, drawing clients from both near and far.

It’s not the South Dakota most people know: the homesteader state with its vast farmlands, the Badlands and Mount Rushmore. The cattle and pigs here outnumber the citizens by a factor of six. It has no members in the Bloomberg Billionaires Index of the world’s richest 500 people.

But it’s spurred periodic — and fleeting — bursts of attention by news outlets from around the globe.

The Pandora Papers revealed how foreign politicians and business leaders moved money and other assets into US trusts, sometimes shielding them from taxes or obscuring their ownership or involvement in deals. The revelations gave a boost to critics who for years have warned about the consequences of giving the wealthy a way to legally circumvent both taxes and scrutiny.

Over at Josiah’s, an airy coffee shop in a downtown building where Auburn and Nash cars once were sold, Simmons says the reality is different: trusts aren’t necessarily more secretive than normal bank accounts. Mere accusations of wrongdoing shouldn’t deny people from opening accounts here. Perhaps the Internal Revenue Service could share more of its data with foreign jurisdictions but that’s up to the federal government, not South Dakota.

“If you’re in the service industry, there are bad people that occasionally sneak through the cracks,” he says as chatter and Beatles tunes fill the room. “If you look at 12 million documents,” — the size of the Pandora Papers leak — “and you find half a dozen people that have, that’s not a bad error rate. But we want zero, of course.”

The Washington Post, which took part in the Pandora Papers investigation, identified nearly 30 US-based trusts with assets tied to people or companies that have been accused of fraud, bribery or human rights abuses.

Though the trust business is strong here, it hardly makes Sioux Falls a company town. That’s partly because it’s divided among dozens of trust firms, supported by a range of law firms spread across this city of about 180,000. And partly because discretion lies at the heart of its model. Only the names adorning the crests of buildings towering downtown give clues: American Bank & Trust; First Bank & Trust; CorTrust Bank; Dacotah Bank.

And there, in an old Kresge five-and-dime at the corner of Phillips Avenue and 10th Street, is the South Dakota Trust Co. Gray drapes cover the first-floor windows, revealing nothing about the firm’s roster of clients that spans more than 50 nationalities and 100 billionaires.

Why do industry executives here usually decline interviews? Years ago, the firm’s co-founder Pierce McDowell — known to some as “P3″ and regarded as one of the creators of the state’s trust business — went to dinner with a Bloomberg News reporter. The subsequent story showed McDowell likening a dynasty trust to a wine glass that generations get to sip from, and included a picture of him next to a family heirloom, bellowing with laughter. The portrayal, some in town whispered, wasn’t flattering.

A handful of industry experts and lawmakers didn’t respond to requests for interviews. But the South Dakota Trust Association, a trade group, said in an emailed statement that it’s proud of the state’s financial sector and the advantages it has brought. “Banks and trust companies in our state are held to extremely high standards with strict state and federal requirements to guard against any potential misuse of otherwise lawful activities,” it said.

Jayna Voss and Bobbi Thury say there’s an obvious downside to this reluctance to talk: stories end up focusing on alleged shenanigans, missing that many people who seek out South Dakota for its trusts aren’t super-rich, nor have dark intentions. 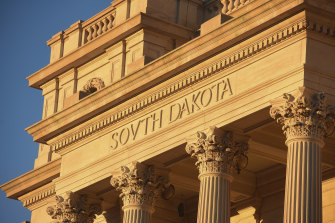 Around four decades ago, the state adopted a few key laws that caught the financial industry’s attention and made it an attractive spot for anyone wanting to pass assets to future generations without triggering estate taxes.Credit:AP

At the office of the Legacy Law Firm, which the two co-founded about five years ago to focus on estate planning, they tell how trusts can be used by farmers and small business owners, or help families avoid personal ruin over spiralling health-care costs. Working within the confines of the law to minimise taxes, they say, isn’t the same as tax evasion.

“You go here to do something — legally — to help meet the goals that you have,” Voss says.

And sure, some say: South Dakota could tighten its trust laws, but that would just drive clients elsewhere and cost the state hundreds of well-paying jobs. Isn’t the federal government better equipped to decide where the line should be drawn?

Reynold Nesiba, 55, a rare Democratic state senator in South Dakota’s deeply red legislature, is torn. “I don’t want us to be helping anybody engage in criminal behaviour,” he says while sipping a Blue Moon on a recent Tuesday afternoon near Augustana College where he teaches. On the other hand, “it’s a complicated thing for South Dakota to be responsible for.”

In the legislature there are about twice as many farmers and ranchers as there are lawyers. One state representative corrals bucking horses and bulls at rodeos for a living. They meet for about 40 days each year, and each make about $US12,000 and 42 cents per mile for gas. It’s a citizen legislature, Nesiba says, and for the most part it works really well.

“Do South Dakotans have to know what the King of Jordan has been up to?” he says. “Do we have to adjudicate that? It really needs to be federal legislation that prevents states from competing against each other for the lowest taxes and most secure privacy laws across the country.”