The elephant in the global room is China’s ferocious property squeeze. Xi Jinping is deliberately breaking the back of the world’s biggest financial bubble.

The Chinese economy already has one foot in recession – by its own cyclical standards – and is heading for a hard-landing over the next few months as construction is starved of credit. 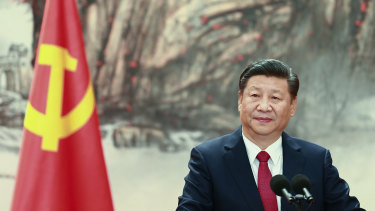 President Xi Jinping is shaking up the Chinese economy.Credit:Getty Images

“Markets should be prepared for what could be a much worse-than-expected growth slowdown, and potential stock market turmoil,” said Ting Lu, Nomura’s chief China economist. The scale of China’s cement addiction is eye-watering. “Half the world’s cranes are in China. We’re talking about 50 per cent of the global construction business,” he said.

Home building and property make up 17 per cent of Chinese GDP, including furniture and appliances. The sector also generates 44 per cent of local government revenues through land sales and fees, injecting $US1.3 trillion ($1.8 trillion) a year into the economy as quasi-fiscal spending. All told, property makes up a quarter of the Chinese economy, three times the relative weighting of America’s extreme bubble in 2007.

Xi Jinping’s assault on property should not be confused with the stop-go cycles of the last quarter century, a form of Keynesian fine-tuning with “Chinese characteristics” that has each time prevented economic slowdowns from going too far – at the cost of worsening debt ratios.

“This time is different. It is China’s Volcker moment,” says Ting. The term refers to the drastic monetary tightening of the US Federal Reserve under Paul Volcker, who raised interest rates to 19 per cent in 1981 to halt the destructive wage-price spiral of the Great Inflation – setting off the Latin American debt crisis as collateral damage.

Nomura says sales curbs already in place may push the property nexus into outright contraction before the end of the year. The crunch comes at a delicate juncture for the West, just as COVID stimulus fades and emergency support is yanked away. Goldman Sachs says the negative effects of “fiscal drag” in the US amount to 4 per cent of GDP (annualised) from now until the end of 2022.

Nomura describes the Volcker parallel as “positive praise for Beijing”, and in one sense it is. The Communist Party at last seems determined to lance the boil. But Xi’s petulant shake-up of the economy is also an ideological repudiation of the Deng Xiaoping formula credited with lifting the country out of poverty. His “common prosperity” campaign looks all too like a neo-Maoist purge.

It amounts to a declaration of war on “disorderly capital” and swaths of the private sector – the only dynamic part of China’s economy. The regulatory mugging of internet platforms, fintech, video games, ride-hailing, after-school tutoring, food delivery, and e-cigarettes – with “rectifications” to match – has echoes of the Cultural Revolution.

Those who know how the world economy really works are trying to head off a debacle. “We must be vigilant against “common prosperity” becoming a Great Leap Forward or something that blights development,” said Li Daokui, a former rate-setter at the central bank and a Davos fixture.

The COVID boom has been perversely lucrative for the owners of capital in rich economies. But the easy money is exhausted and political risk is rising. We are moving into treacherous global waters.

But the revolutionary mood was made all clear this week in a WeChat blog known as the “Li Guangman Ice Point Commentary”. His diatribe was reprinted across the state-run media with the clear blessing of the regime.

“Everyone can feel that a profound change is taking place,” he stated, proclaiming an end to China’s love affair with Western culture and “return to the essence of socialism”. It was framed as a fight to the death with the West, the unvarnished Xi doctrine.

The showdown has exposed China’s Achilles’ heel: its reliance on imported hi-tech components and chips, the fuel of the digital economy.

The other catalytic shock has been this year’s census, revealing that the country is ageing even faster than feared. The fertility has kept falling to 1.3 per cent despite the end of the one-child policy, now the three-child policy.

The Party has concluded that the house price spiral is triply corrosive: it is a financial black hole; it is the chief cause of cancerous inequality; and it is a strategic threat through the demographic channel.

E-house China Research says the ratio of prices to average incomes in Shenzhen has reached 43.5. Top party officials have been sacked for allowing this to happen. Local government bosses everywhere now know that they will be punished for property booms and rewarded for austerity.

The plan is to offset the attack on property and other sectors of capitalist sin with “universal easing” to bolster the rest of the economy. The State Council last month ordered the People’s Bank to cut the reserve requirement ratio for lenders in a pre-emptive move.

This cannot stop a slowdown. Construction is the chief instrument of cyclical management. No other sector is big enough to compensate, nor able to transmit the credit impulse.

The immediate danger is what happens to Chinese developers with $US5.1 trillion ($6.9 trillion) debt between them, many relying on sales of unbuilt property to roll over existing liabilities. 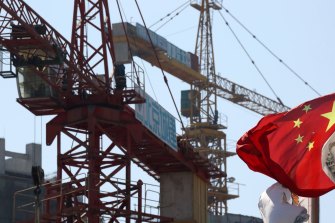 China’s developers have amassed $US5.1 trillion in debt between them, with many relying on sales of unbuilt property to roll over existing liabilities.Credit:Bloomberg

Hedge fund veteran George Soros this week floated the possibility of a systemic financial crash and an educational reckoning for tourist investors from the West. But I find it hard to imagine a Lehmanesque “Minsky” meltdown in a system where the state retains iron control over banks.

The authorities are already orchestrating a disguised soft-landing for indebted developer Evergrande. “They cannot afford to let it go bust so they are kicking the can down the road,” said George Magnus from Oxford University’s China Centre.

“The Party craves two things above all: control, and stability. If the property market falters, the consequences for the Chinese economy will be savage. They will not want to take that risk before next year’s Party Congress,” he said. The forum is supposed to be the ultimate coronation of “helmsman” Xi.

Yet that does not preclude a slow-motion deterioration that ends illusions of Chinese economic exceptionalism and that is large enough to throw the world’s post-pandemic recovery into doubt. The unfolding drama dwarfs the relatively trivial question of when the Fed will tweak its bond purchases, and by how much.

The COVID boom has been perversely lucrative for the owners of capital in rich economies. But the easy money is exhausted and political risk is rising. We are moving into treacherous global waters.