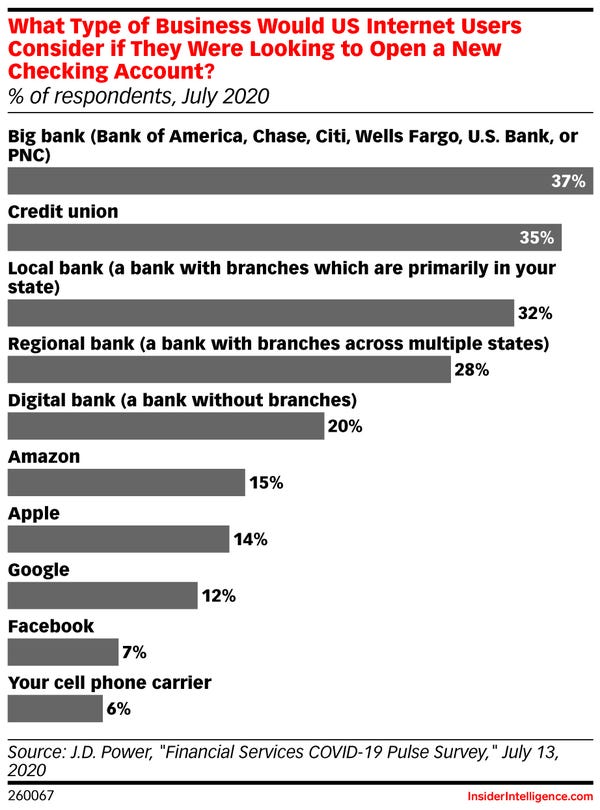 Upon receiving regulatory approval for the Golden Pacific purchase, SoFi will contribute an additional $750 million into the bank to further drive Golden Pacific’s national and digital expansion. The pending transaction follows SoFi’s January 2021 announcement that it will go public later in Q1—through which it expects to raise up to $2.4 billion in cash proceeds. The alt lender is wasting no time bolstering its current banking offering in the interim, launching its first ever credit card yesterday as well.

And Insider Intelligence believes that the Golden Pacific acquisition means SoFi is abandoning its original plan to build a nationally chartered bank from scratch.

SoFi’s new approach to becoming a nationally chartered bank could inspire other well-funded neobanks and tech companies to do the same. Purchasing Golden Pacific allows SoFi to switch from a de novo to a change-of-control application, ultimately speeding up its process of becoming a bank.

Meanwhile, Chime has said it is considering applying for a national charter, and Klarna—which is actively expanding in the US—is already chartered in Europe. Given the significant amount of funding each has at its disposal, following SoFi’s strategy of scooping up a smaller bank could greatly accelerate their banking ambitions in the US.

And nonbank fintechs aren’t the only ones attempting to carve out a piece of this market: Tech companies—including Apple and Google—have been dipping their toes into banking as well. The significant regulatory requirements have likely precluded them from applying for banking charters of their own, but acquiring an already established bank that is more experienced in handling such matters could alleviate those concerns.