Home » Business » Why are people quitting their jobs?

Why are people quitting their jobs?

New York (CNN Business)Montclair Bread Co. closed last weekend after a quarter of the staff tested positive for Covid-19. The bakery missed out on 25% of its monthly sales.

“We’re basically open during the week to prep for the weekend,” said Rachel Wyman, the owner of the artisan bread, specialty doughnut and treat shop in Montclair, New Jersey. The 10-year-old bakery stayed open throughout the pandemic because it was considered an essential business. “I can’t remember the last time I made the decision to close on a weekend,” Wyman added.
Without enough bakers to operate, she didn’t have a choice. She made the decision Thursday to close down for a week to give the whole staff time to “get tested and come back healthy hopefully.”

Wyman is paying her employees for the week off. But it’s coming out of her budget, so she’s late on paying rent for her home.

Although she hopes to open this weekend, the plan is fluid. She found out Wednesday that two more employees tested positive. 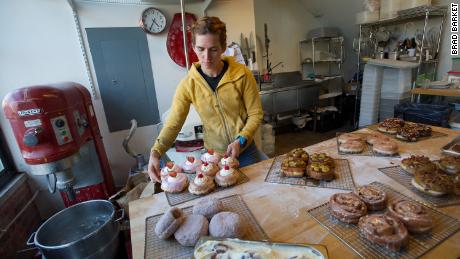 The latest coronavirus surge in the United States, driven by the Omicron variant, has disrupted businesses. It has also stretched their employees, who were already worn down from nearly two years of taxing work throughout the pandemic and a historic labor shortage.
As America comes down with Covid-19 again, stores, restaurants, airlines and other industries have few other options but to serve customers less — or not at all. Apple (AAPL) last week closed all of its stores in New York City to customer browsing, while Macy’s (M) said it would shorten its morning and evening hours Monday through Thursday for all of this month.
Some workers are coming down sick while others are calling out because their child care plans are in flux with some schools closing down. Some employees are staying home, fearful about catching the virus on the job.
On Wednesday, six employees at a Starbucks (SBUX) in Buffalo that recently voted to join a union walked out, citing health concerns. The walkout prompted the store to close temporarily.

The growing number of sick workers adds to the pressures that businesses face holding onto staff and filling vacancies, as well as their demands on their current staff, who are forced to pick up extra responsibilities or shifts.
The surge has triggered “widespread cancellations and closures, as already short-staffed businesses are hit with a wave of staff calling in sick,” Michael Pearce, senior US economist at Capital Economics, said in an email to clients Wednesday.
Several recent data points, which do not yet factor in the arrival of the Omicron variant, highlight the historically tight US labor market.
A record 4.5 million Americans voluntarily left their jobs in November, according to Bureau of Labor Statistics data released Tuesday. This pushed the quits rate to 3%, matching the high from September. 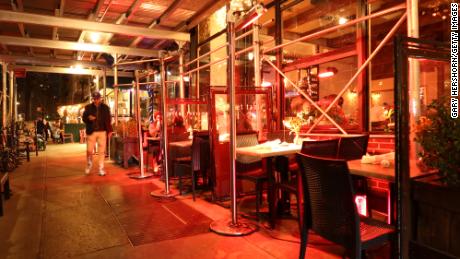 “Workers continued to quit their jobs at a historic rate. The low-wage sectors directly impacted by the pandemic continued to be the source of much of the elevated quitting,” Nick Bunker, director of research at the Indeed Hiring Lab, said in emailed comments Tuesday.
Employers also had 10.6 million jobs to fill in November, a slight decline compared with just over 11 million job openings in October.
Small business owners, in particular, continue to struggle to find workers: 48% of all small business owners reported they had job openings they could not fill in November, down one point from October, according to a National Federation of Independent Business survey conducted last month.

In New York City, an early pandemic hotspot, cases of Covid-19 have exploded in recent weeks. The spike has led to staffing shortages at restaurants like Neir’s Tavern, a small historic bar in Queens.
On December 18, Neir’s owner Loycent Gorden got a call from one of his bartenders who wasn’t feeling well. Later, the employee told Gordon that he had tested positive.
Gordon decided that the rest of the staff, which totals just about eight people altogether, should be tested.
“That’s when all hell broke loose,” he said. “Everybody started feeling sick, started putting in the group chat their test results. And everybody kept saying positive, positive, positive.” 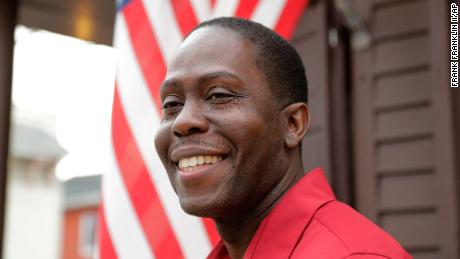 For about a week and a half after that, Neir’s Tavern staff of eight shrank to just two people. Gordon himself tested positive during that period and suffered from symptoms, and had to isolate himself.
Because of the outages, Gordon closed the tavern for two days in addition to a planned closure on Christmas Day. He also canceled events like bar trivia and open mic night.
Hiring temporary staff was not an option, he said. With Gordon and most of his staffers out sick, “who’s going to train them?”
Gupshup, a modern Indian restaurant in Manhattan, has also suffered from staffing shortages, said owner Jimmy Rizvi. Because of workers calling out sick, Rizvi and other staffers have had to wear different hats to keep the restaurant running.

“I stepped in as host., my chef … had to work on the lines,” he said. On another occasion, when a bartender didn’t show up, a barback filled in.
The ad-hoc approach has meant that, so far, Gupshup hasn’t had to close its doors. As Rizvi said, “We juggled with our existing staff.”
Source: Read Full Article