Welcome to Insider Cannabis, our weekly newsletter where we’re bringing you an inside look at the deals, trends, and personalities driving the multibillion-dollar global cannabis boom.

Sign up here to get it in your inbox every week.

Welcome to another edition of Insider Cannabis.

If you missed it, Yeji and I hosted a panel yesterday afternoon with Mitch Baruchowitz of Merida Capital Holdings and Emily Paxhia of Poseidon Asset Management.

We discussed how to invest in the cannabis industry, how to choose companies, and who to avoid. We’ll have a full playback available early next week, and we’re working on a couple of stories that came out of the panel — keep your eyes peeled for those as well.

For those that watch the industry closely or are looking for an entry, heed Mitch and Emily’s advice: Invest in companies that are affected by 280E, the IRS rule that prohibits cannabis companies from deducting regular business expenses. (Read our story from last year here if you need a primer).

The rule forces cannabis companies to pay high tax rates compared to companies in other industries, compressing margins (and share prices). If some lawmakers in DC get their way, this rule could be a thing of the past, and companies could see their stocks boom.

Here’s what we wrote about this week:

Our colleague Kimberly Leonard reported that some Hill staffers routinely use marijuana to socialize, blow off steam in a cutthroat culture with long workdays, or as a middle finger to bosses who make them work late on a Friday night. Capitol Hill seems to differ from Biden’s White House, where some staffers were recently fired for weed use.

The ultimate guide to cannabis legalization in New York: The key dates to know, and which stocks could benefit the most.

Here you’ll find every single article we’ve written about New York’s newly legalized market: everything from a big picture rundown of what laymen need to know to the top stocks analysts think will get a boost from the market. We’ll update it regularly with more stories.

Chart of the week

Cannabis companies are seeing a sharp uptick in funding in early 2021, after a long downturn in  2019 and 2020, according to data from CB Insights. In the past three months, global cannabis startups have raised $653 million in equity funding: 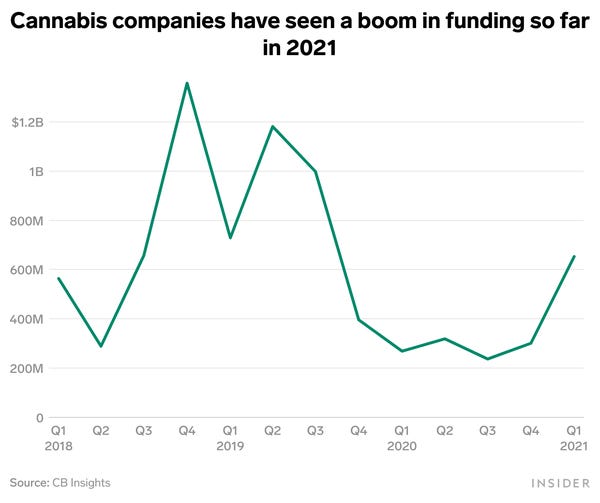 I’m pregnant and I don’t want to quit using marijuana. Do I have to? (Insider)

He Fought for Decades to Make Marijuana Legal. Now What? (New York Times)