‘We aren’t making it’: US small businesses face uncertain futures

The ice-cream shop Island Pops in Brooklyn usually sees its business pick up from a winter lull this time of year, when the days are longer and the spring weather sets in.

Instead, its doors are closed to walk-in customers at the order of health authorities hoping to stem the spread of coronavirus by keeping people in New York City out of restaurants, bars, gyms and movie theaters.

$1,200 checks for all? What you need to know about the US coronavirus bailout

Across the US small businesses selling coffee, cakes, pilates classes, books and artisanal cheese have popped up over the last decade, changing neighborhoods for the better, revitalizing downtowns. Now all that is under threat.

Loyal customers – and some big businesses – are trying to help. Buying gift cards, making donations. But on its current trajectory the scale this unprecedented crisis means many of these businesses just won’t survive.

Cities and states across the US this week issued similar orders to close restaurants to dine-in customers and close businesses which create crowds, leaving small businesses such as Island Pops uncertain how long it can go on.

“The government should understand that, one, we aren’t making it,” said Shelly Marshal, Island Pops’ co-owner. “And two, if we have to close up, there are five or six people who have to go home without pay. If they can bail the big banks out they can definitely bail small businesses out.” 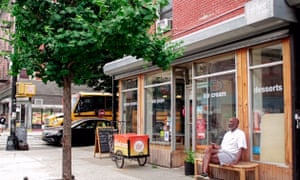 Small businesses are the anchor of the US economy and employed 58.9 million people in 2015. Governments are introducing measures to help ease the burden of forced closures, but business owners are worried that help is coming too little too late as they see an immediate drop in business.

Like countless other businesses, Island Pops is encouraging customers to buy gift cards to use after the crisis passes to try to stem immediate losses. Otherwise, their only other income stream is delivery and pickup orders.

“Even that won’t take us through the month for our responsibilities,” Marshall said. “We have staff, of course we have rent, we have insurance, we have everything that still needs to be paid and we’ve gone through our emergency fund, which is our winter fund.”

As of Thursday morning, Marshall said it was unlikely the business could meet the minimum amount of pints it needs to sell each week. It has even become hard to rely on loyal customers, because they too are losing their jobs, or fearful a recession will limit their funds too.

Marshall said her neighborhood, a gentrifying part of Brooklyn with a lively food and drink scene, has been a “ghost town” this week. During one shift, she commiserated with an independent coffee shop owner, who told her at 2pm she was his fifth customer of the day, after opening at 6am.

Patrick FitzGerald, a lecturer at the University of Pennsylvania’s Wharton Business School, said while people might think the world is technology-focused, small businesses depend on in-person interactions.

“The reality is for 90% of small businesses, it’s face-to-face, one-on-one, transactions,” FitzGerald said. “And at the moment, those have all, for the most part have stalled, so the impact is highly dramatic.”

Technological advances can help, however, and FitzGerald said for any business which has been toying with using video conferencing, at-home delivery or pre-purchasing: “The time is now to deploy those.”

The federal and local governments are also trying to help. The US Small Business Administration (SBA) said it would provide businesses with up to $2m in low-interest loans to keep them afloat. And New York City is one of several local governments offering loan and grant programs to local businesses.

Facebook pledged $100m in grants to impacted stores and restaurants, though the company said it would only start taking applications “in the coming weeks”. Other corporations are also offering services to ease the burden on small businesses, but these efforts don’t address the urgent need to replace the cashflow that comes from someone walking in the door.

So small business are taking creative steps to sell amid a disease outbreak.

Capitol Hill bookstore in Washington DC closed its store to walk-in customers, but offered private, one-hour appointments for up to four would-be book buyers at a time.

“We have to do everything in our power to continue our operations, and keep people employed and keep our business viable, at the same time we don’t want to do anything to harm our employer or our customers, or the community at-large,” co-owner Kyle Burk told NPR.

These moves are being made even as restaurants and nightclubs are forced to sharply cut staff.

Also in Washington DC, a “virtual tip jar” was created to allow people to support service workers at local restaurants, hotels and nightclubs who were either laid off, not being paid temporarily or not receiving tips. Other businesses are turning to crowdfunding websites to raise money for their former staff while still trying to keep their doors open.

In New York City, the beloved Frankies Spuntino Group is trying to raise $100,000 for the employees it has had to put out of work. “We’re all navigating uncharted territory right now, so we cannot tell you how much we appreciate your consideration,” wrote the co-owners, Frank Castronovo and Frank Falcinelli.

Before closing indefinitely on Friday, it expanded the pick-up and delivery menu. Its handmade pasta, pesto and marinara sauce were sold to at-home chefs. The restaurant also sold martini and negroni kits – the byproduct of an emergency law change to help food businesses during the outbreak.

Previously, only beer could be sold for take-out in New York, but the state liquor board relaxed its laws to allow businesses with liquor licenses to sell liquor and wine to customers who also purchase food.

The Brooklyn cocktail and dessert bar Butter & Scotch had to lay off its entire staff on Monday before closing indefinitely on Thursday. In the few days between, the owner, Keavy Landreth, and the general manager, Stephanie Gallardo, who had been laid off, baked cookies and cakes for to-go orders. They also put together cocktail kits so people could emulate the sweet and boozy experience at home.

“The kits were a last-ditch effort to get some more cash on hand to make sure we could pay our employees and selves before closing fully,” Landreth said in an email. “Had I known they were going to be such a hit I would have tried to make more but there was only so much we could do with two people. Hopefully this new alcohol to-go law sticks around and we can get these cocktail kits off the ground again.”

Island Pops’ Marshall, who was inspired to start the business with her husband after craving the traditional Caribbean soursop ice-cream while sick with another virus, chikungunya, said small businesses are the “lifeblood of the economy” and need all the help they can get.

“We employ a significant amount of employees and we create a ton of employment,” Marshall said. “If they don’t see that, it’s a huge problem in the system.”