Volkswagen Ameo is a well-built car and fun to drive

The main USP of the Volkswagen Ameo lies under the hood and that’s the 1.5-litre diesel engine, which comes with a 7-speed DSG. 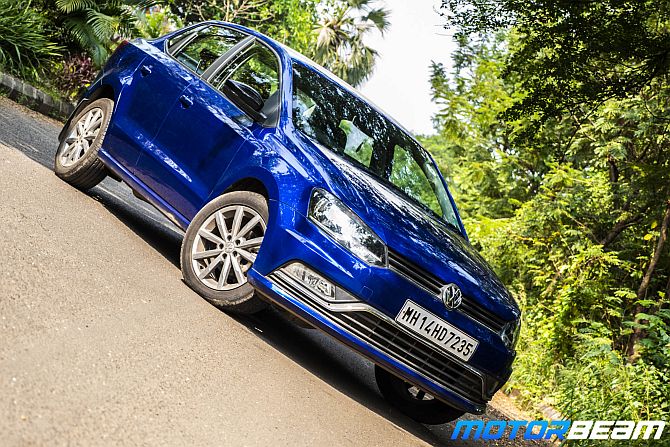 Volkswagen had been happily selling the Polo and Vento in the mass-market segments in the Indian market but in 2016 the company felt the need to fill the gap between these two cars.

The German automaker launched the Ameo which is a made for India car and slotted it between the Polo and Vento, in the highly contested compact sedan segment.

The Ameo was initially available with a 1.2-litre MPI petrol engine and soon after it got a 1.5-litre diesel mill, with the option of a 7-speed DSG too.

The Ameo TDI DSG has been part of the MotorBeam fleet for a few months now and this is what we feel about this car.

On the outside, the Volkswagen Ameo shares its fascia with the Polo with a couple of very minor differences that will be difficult for the layman to point out.

The rear portion of the car has been designed keeping in mind the sub-4-metre requirements and thus the bootlid appears a bit flat looking.

It is a smart design though and looks decent from the rear three-quarters.

It is from the side that the design draws different opinions from different people because not everyone likes the compactness of a small sedan that has been designed to meet a certain criteria. 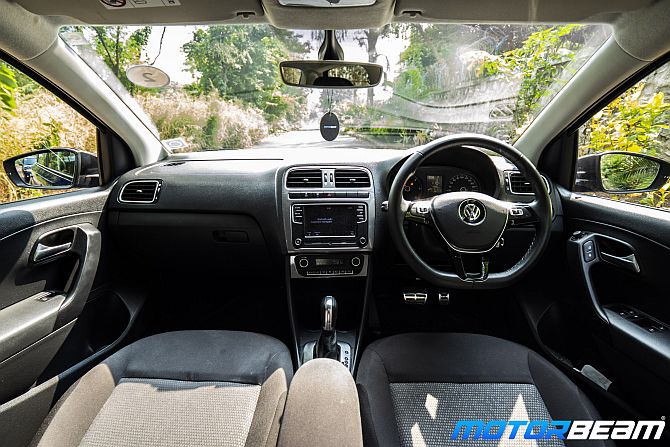 However, open the door and step inside and here’s where the Volkswagen Ameo truly impresses.

We can go on to say that the cabin of this vehicle has segment-best quality when it comes to fit & finish and also the quality of the components like the dashboard panels, door pads, etc.

The interior feels tight and well-built and justifies the price of the car.

Finding a good driving position is easy peasy and outward visibility is pretty decent except the ORVMs which feel a tad small. 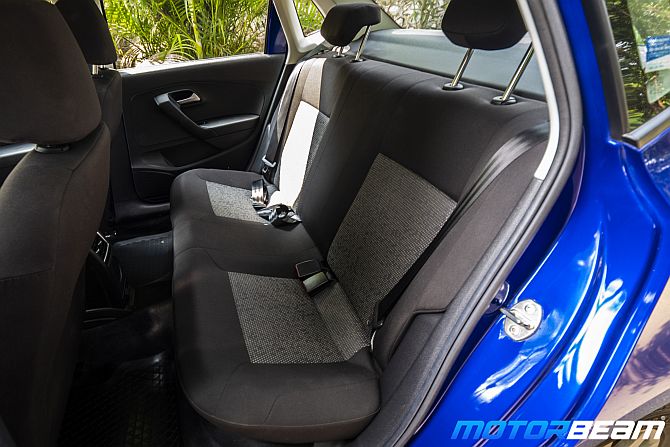 While the front seats are impressive, the Ameo really loses out on space at the rear, with legroom being very limited while head space is just about average too.

Thankfully, the boot is practical and there are enough storage spaces too.

Talking about equipment, the Ameo gets the usual features like cruise control, dual front airbags, ABS, Hill Start Assist, touchscreen infotainment system with Apple CarPlay, climate control and electrically adjustable ORVMs but it also misses out on some features like a push-button start.

The Ameo also doesn’t get seat-belt reminders (even for the driver!) which is a bit shocking.

The touchscreen also doubles up as a display for the reverse camera while the sound quality thrown from the stock speakers is decent. 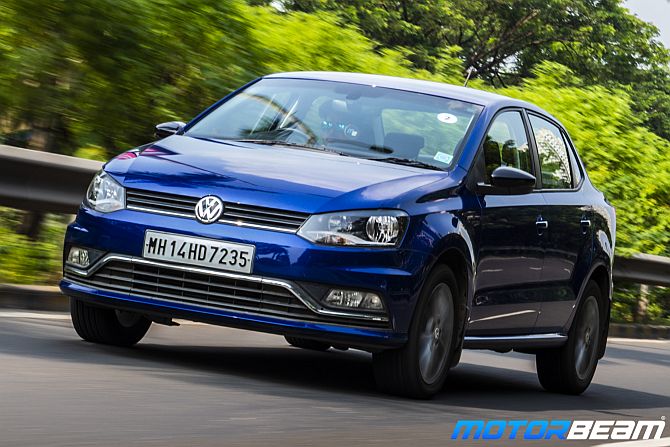 Connectivity is quick and the infotainment system pairs to the phone without any fuss.

The main USP of the Volkswagen Ameo lies under the hood and that’s the 1.5-litre diesel engine, which comes with a 7-speed DSG.

You also get a 5-speed MT if you want but the DSG just offers so much more convenience and ease of use.

The diesel engine is noisy, yes but thankfully vibrations are well-contained and the car boasts of decent NVH insulation.

There is a bit of a lag which is generally felt at low speeds, it is a mixture of turbo lag and the DSG trying to figure which gear to select but once you start gaining pace, it just works effortlessly. 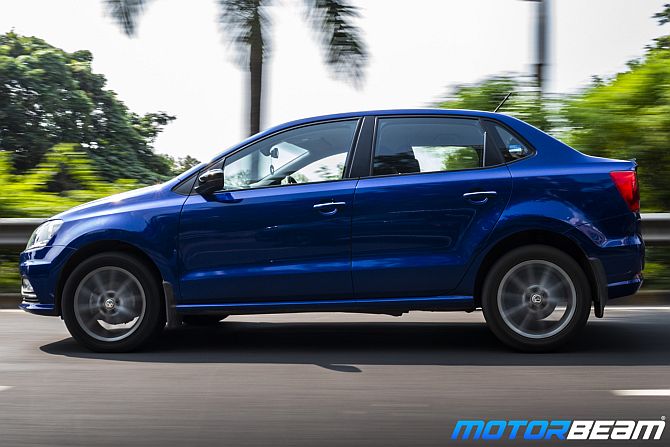 The diesel engine has a lot of grunt, the mid-range torque surge is so strong that the Ameo doesn’t feel strained at all while touching speeds above the ton.

Acceleration is brisk and the car responds very nicely when you slot it in S.

For day to day driving, D mode suits it the best.

The Ameo doesn’t disappoint in terms of fuel efficiency too.

In the city, our test car returned 14-15 km/l and out on the highways, with sedate driving, the figure went on to 19 km/l!

Of course, if you tend to drive aggressively, the numbers do fall a bit. 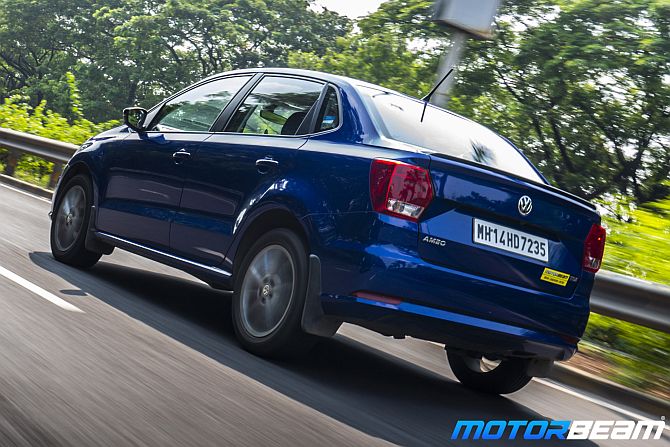 The suspension is well-sorted and lends very good composure to the car.

Yes, the ride feels a bit stiff on uneven roads at low speeds but it feels very mature at medium to high speeds.

The steering is well-weighted when you’re out on the highways but one grouse that we have is that the steering feels too heavy at slow speeds and it feels a bit energy consuming to park the car in tight spaces with that heavy wheel.

The Ameo gets 16-inch tyres which offer fairly good levels of grip while the brakes also bite well.

The Volkswagen Ameo is a well-built car which is also fun to drive. 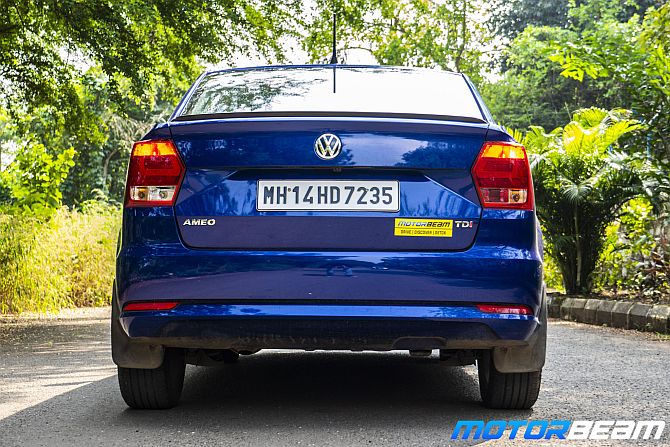 It has the best automatic gearbox in its segment and offers very nice performance too.

However, rear seat space is something that’ll make passengers unhappy while the heavy steering is again a negative point for a lot of customers who want a car which is easy to drive in crowded city roads.

The Volkswagen Ameo, however, is likely to be discontinued soon because it won’t be upgraded to meet the new BS6 norms and the sales volumes also don’t justify keeping the car on the assembly line, which is why Volkswagen updated the Polo and Vento recently but gave the Ameo a miss.