Sixty-four years late and right on time, Alice Childress’ wise and stirring backstage comedy-drama Trouble in Mind is making its long-in-coming Broadway debut tonight, and to describe the play as prescient would be an understatement. Uncanny rings truer.

With a star turn by LaChanze that takes a strong place in a theatrical season already formidable in its roster of performances, Trouble in Mind takes a behind-the-curtain look at the racism, coded prejudice, self-flattery, sexism and built-in bigotry that Broadway has always professed to eschew.

Childress, who died in 1994, knew better, and her insights fuel Trouble in Mind. First staged to acclaim Off Broadway in 1955, the play, about a Black actress in a big Broadway play who must choose between truth and security, was optioned by producers to open on Broadway in 1957 – if only Childress would write a more upbeat and forgiving ending. She chose truth.

Set in a theater during rehearsals for the play-within-the-play, Trouble in Mind details the interactions among the cast – a mostly Black ensemble of sophisticated, world-wise actors playing stereotypical characters in the sort of White Savior fiction that would, for decades, pass as enlightened tolerance. Atticus Finch was knocking at the door.

LaChanze plays Wiletta Mayer, the actress in the middle of a successful career playing maids and good-hearted country folk. Whatever youthful idealism and artistic ambition she once had has been worn down by big roadblocks and micro-aggressions. Here, she trades knowing barbs with another Black actress in the show, her old friend Millie Davis (Jessica Frances Dukes):

Millie: Last show I was in, I wouldn’t even tell my relatives. All I did was shout “Lord, have mercy!”
for almost two hours every night.

Wiletta: Yes, but you did it, so hush. She’s played every flower in the garden. Let’s see, what was your
name in that TV mess? Gardenia! She was Gardenia! ‘Nother thing she was Magnolia. Chrysanthemum was another…

Their new play, Chaos in Belleville, isn’t any better. Wiletta plays the mother of a fiery young Civil Rights activist whose work has angered a small town racist lynch mob. The son is played by a young, inexperienced drama school graduate John Nevins (Brandon Micheal Hall), whose talent and charisma have him on a quick path to Hollywood (the character is likely based on Childress’ real-life friend Sidney Poitier). 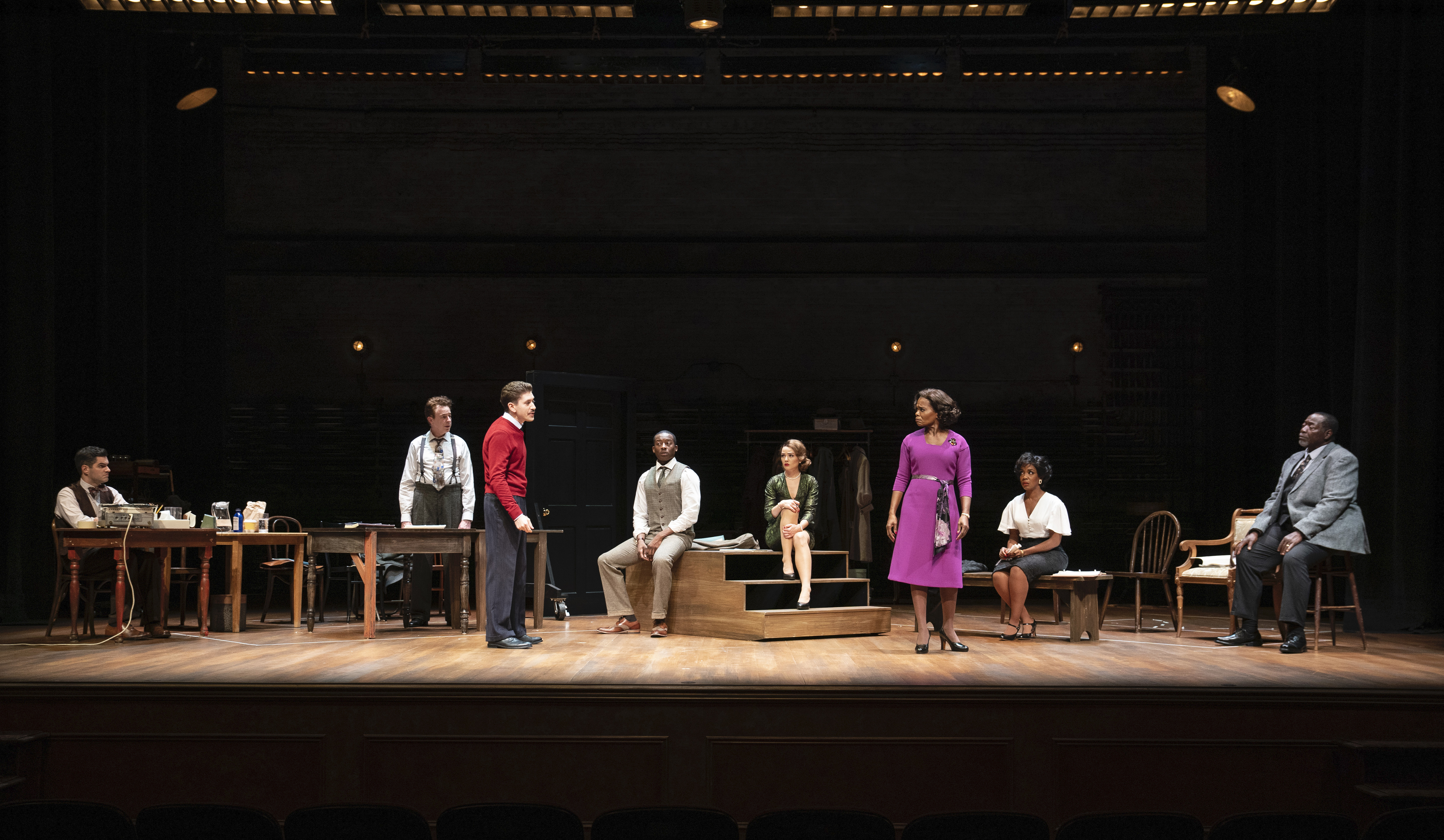 Wiletta takes a quick liking to the young man – both are from the same hometown – and attempts to wise him up in the ways of Broadway.

“White folks can’t stand unhappy Negroes,” she says, “so laugh, laugh when it ain’t funny at all.” After John shyly points out the “Uncle Tommish” tone, Wiletta says, “It is Tommish… but they do it more than we do. They call it bein’ a ‘yes man.’ You either do it and stay or don’t do it and get out.”

The particular man Wiletta is warning John about is their hotshot director Al Manners (Michael Zegen, going for broke – and succeeding – in depicting the pompous, near sadistic extremes of a theater bully, with no signs of the mensch he portrays in The Marvelous Mrs. Maisel), a Hollywood success (who might or might not be under investigation by HUAC) making his Broadway debut with this Big Important Play about race relations. Despite a reputation as a West Coast liberal, Manners is nothing if not a hypocrite, a walking, talking tower of condescension who belittles women, snubs his Black cast (except, pointedly, the future movie star) and berates his put-upon assistant with a cruelty that leaves nothing to Scott Rudin (I said this play was prescient).

This beautifully-honed Roundabout Theatre Company production, from the era-perfect designs of Arnulfo Maldonado’s naturalistic set and Emilio Sosa’s costumes, to the subtle shifts in Kathy A. Perkins’ lighting design that mirror the evolving moods of the play and its characters. Charles Randolph Wright directs with a rhythm and pacing that combines backstage realism with the dramatic beats of Wiletta’s awakening power. 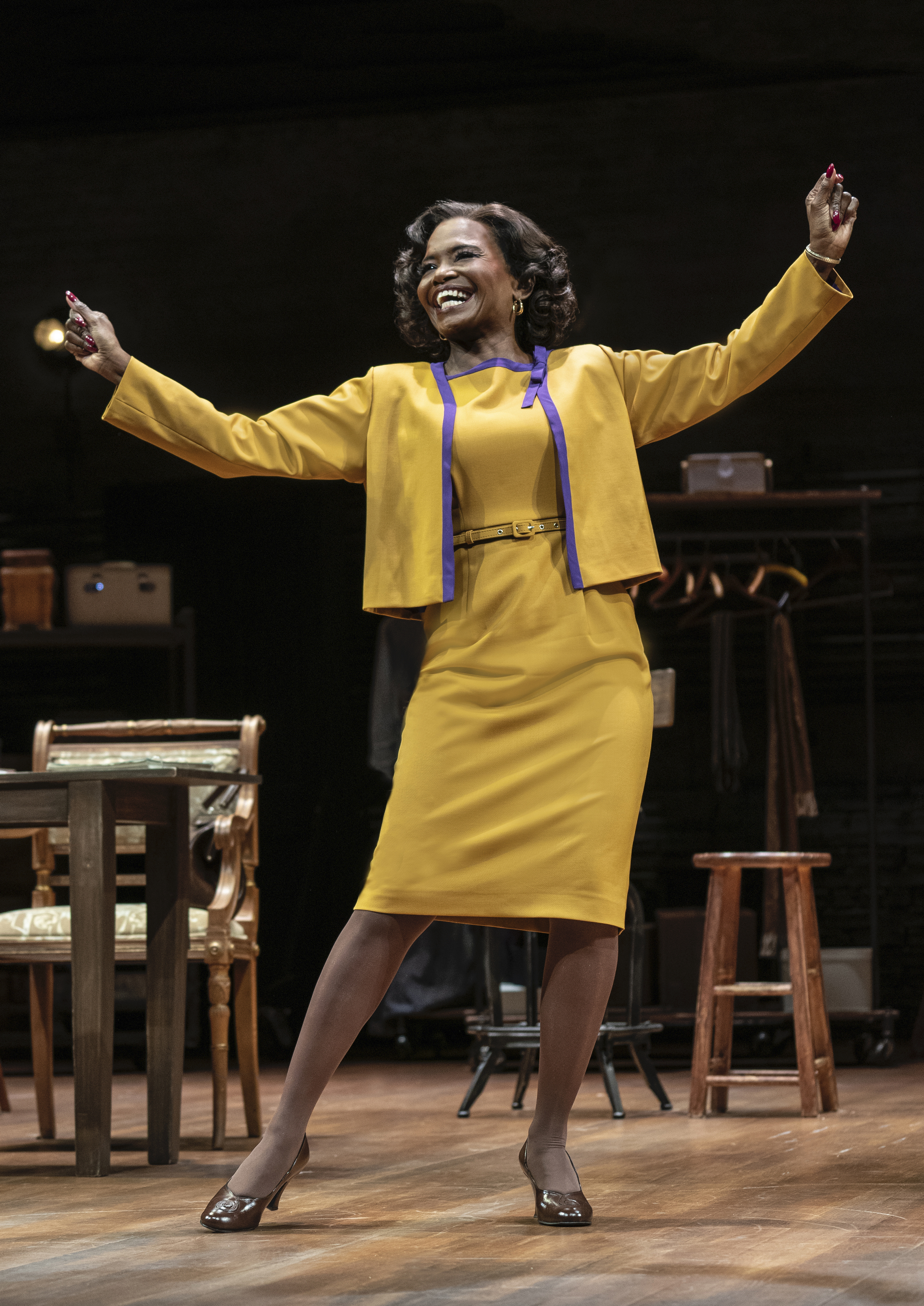 Trouble in Mind makes a wonderful showcase for an excellent cast. In addition to LaChanze, Zegen, Hall and Dukes, there’s Chuck Cooper as Sheldon, a genial aging actor whose accommodating demeanor hides a traumatic past; Simon Jones as Henry, the elderly Irish stage doorman who shares a bond with Wiletta; Alex Mickiewicz as the put-upon stage manager; Don Stephenson as the white soap opera actor cast as the do-gooding savior in a story not his own; and Danielle Campbell as Judy, another drama school grad but whose whiteness and privileged background blinds her to racism (even if it can’t shield her from the director’s misogyny). Of the cast, only Campbell seemed to be still finding her footing at the reviewed performance, going a bit cartoonish at the beginning before finding her character’s slowly awakening sense of justice.

Director Wright finds a graceful balance between presenting the ensemble, all-parts-moving cast rehearsal and the spotlight moments that Childress writes for her characters. Among the standout examples of the latter: Wiletta’s impromptu rapid-fire impressions of all the stock, racist stereotypes Black actors of the day were forced to portray; Sheldon’s harrowing description of witnessing, as a child, a lynching; and director Al’s defensive I-am-not-a-racist speech in which he almost – almost – makes a convincing argument in favor of the best-we-can-expect compromises.

The white director’s failure to truly grasp the real cost of such compromise – a cost that will be borne entirely by the Black actors – will force Wiletta into a life-changing decision. Will she play the role that betrays the very humanity of Black women, or take a stand even when doing so threatens not only her own livelihood but the careers and financial health of her friends and colleagues?

We know what Childress would decide in a sadly comparable choice after writing this play, and we know what it cost her: A wait of nearly 70 years for Trouble in Mind to take its rightful place in the Broadway canon. This Roundabout production completes the journey.