Tough Times Ahead for Disney Stock

Dow component The Walt Disney Company (DIS) has been hit with a perfect storm of headwinds that will affect performance well into fiscal year 2021. The market has responded with breakdowns through two major support levels, raising the odds that the stock has entered a secular downtrend that will continue for months or years. A rapid recovery isn't likely even if the U.S. economy ramps up this summer because the company specializes in big crowded places that consumers are likely to avoid until the pandemic runs its course.

Everyone is familiar with Disney's tough road at this point, with theme parks, resorts, movie production, and cruise ship lines shut down all around the world. Meanwhile, the ESPN division has been forced to broadcast old sports and new oddities that include the "Classic Tetris World Championship," affecting advertising revenues. Regular networks are making matters worse because ad rates have also dropped, with corporations slicing budgets to keep cash in hand.

The Disney+ premium service and substantial Hulu stake offer rare bright spots for the company's bottom line, with the subscriber base for the branded channel lifting above 50 million this month. Even so, streaming eyeballs are relatively small profit producers compared to major divisions, and the shutdown-driven subscriber surge may be unsustainable, as rival Netflix, Inc. (NFLX) warned during this week's earnings presentation.

Expectations for Disney's second quarter 2020 earnings release on May 5 may still be too high at earnings per share (EPS) $0.91 on $17.5 billion in revenue. The company reported profits of $1.61 per share on revenue of $14.9 billion in the second quarter of 2019, and the jump in 2020 revenue seems implausible. Wall Street analysts seem to share this skeptical view, with recent downgrades from BoA/Merrill, UBS, Credit Suisse, and Wells Fargo. 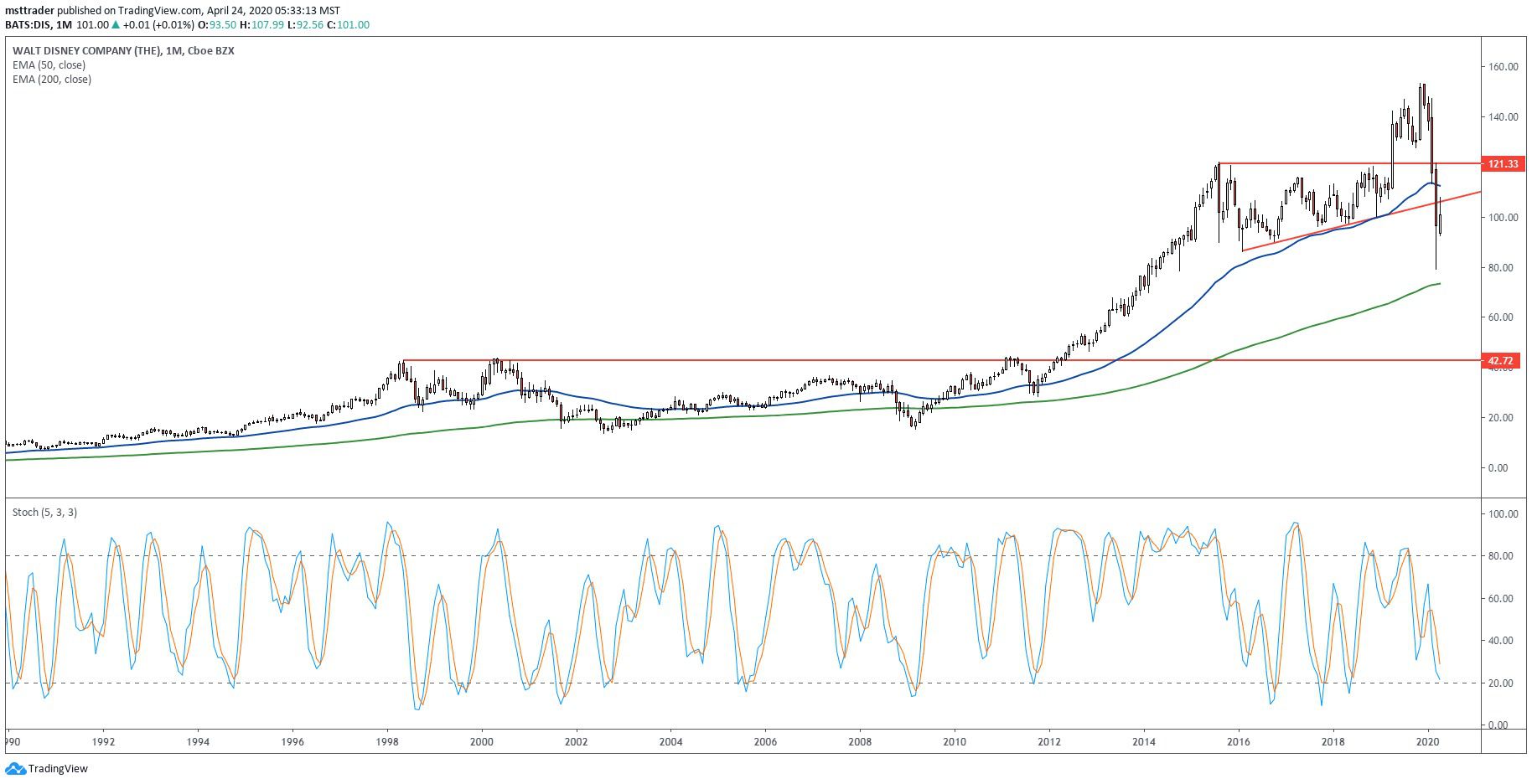 The stock entered a channeled uptrend after the 1987 crash, posting steady gains into the 1998 high at a split-adjusted $42.75. A 2000 breakout attempt failed, giving way to a downtick that completed a double top breakdown after the September attacks in 2001. The sell-off finally bottomed out at a six-year low in August 2002, yielding a recovery wave that failed at the .786 Fibonacci sell-off retracement level in 2007.

A steep decline during the 2008 economic collapse found support less than two points above the 2002 low, generating a bounce that completed a round trip into the 1998 and 2000 peaks in 2011. The stock broke out in 2012, booking the most prolific upside so far this century into July 2015, when troubles at the ESPN division triggered a two-legged sell-off that carved the first leg of a massive ascending triangle pattern.

The stock finally mounted triangle resistance in April 2019 after the entertainment giant announced a November release date for the Disney+ premium service. The powerful advance posted an all-time high at $153.41 just two weeks after the roll-out and pulled back in a mild downtick that accelerated into a vertical decline in February 2020. Bearish action failed the triangle breakout on Feb. 28 and four-year triangle support less than two weeks later.

The sell-off ended at a five-year low in mid-March, giving way to a choppy bounce that reached new resistance on March 26. An April 9 attempt to clear that level failed, yielding mixed sideways action while the oversold technical reading slowly come off the table. Ominously, the on-balance volume (OBV) accumulation-distribution indicator, which hit a 21-month low in March, has barely budged during the uptick, indicating that committed investors are sitting on their hands.

Disney stock broke major support at $117 and $107 during the first quarter decline and has now bounced into the lower resistance level.

Disclosure: The author held no positions in the aforementioned securities at the time of publication.