We’re tracking the latest on the coronavirus outbreak and the global response.Sign up here for our daily newsletter on what you need to know.

TheU.S. track and field team, one of the most prominent individual sports federations in the Olympic movement, added to the clamor urging that the 2020 Tokyo Games be postponed, and the IOC again ignored the noise.

USA Track and Field on Saturday published a letter that Chief Executive Officer Max Siegel wrote to Team USA leadership, asking them to advocate a delay. Siegel said it was now clear that athletes were unable to properly train because of the coronavirus pandemic.

“We certainly understand the ramifications of this request, and the realities of trying to coordinate the logistics of a postponed Olympic Games around the schedules of other athletes, sport federations, key stakeholders, etc.,” Siegel wrote. “But the alternative of moving forward in light of the current global situation would not be in the best interest of our athletes.”

Siegel’s letter comes a day after USA Swimming, another powerful Olympic team, made asimilar request, citing the stress being put on athletes. Olympic bodies from Europe have also said their athletes can’t train properly, while countries including Brazil have urged a delay. The International Olympic Committee, which holds an executive board meeting next week, is standing by its plan to stage its summer showpiece in July, according to a Kyodo report on Saturday.

The U.S. swimming and track and field teams are two of America’s most successful Olympic teams, and their popularity is one of the main reasonsComcast Corp.’s NBC agreed to pay $2.6 billion every four years to broadcast the games, significantly more than any other global media company. At the 2016 Summer Games in Rio, they accounted for more than half of the country’s 121 medals, and 29 of the 46 golds.

“Those are the powerhouses in the Olympic movement,” said sprinter Manteo Mitchell, a silver medalist at the 2012 London Games and 2020 Olympic hopeful. “When those groups step to the line, you pay closer attention.”

Hayley Wickenheiser, a four-time Olympic gold medalist on Canada’s ice hockey team and IOC member, added her voice to the campaign and said she expects the IOC will eventually back down.

“I do think they will be postponed, it’s inevitable. Every day is the Olympic Games,” she said in an Instagram Q&A. “Every day athletes cannot train, workout, it’s a day they cannot prepare.” 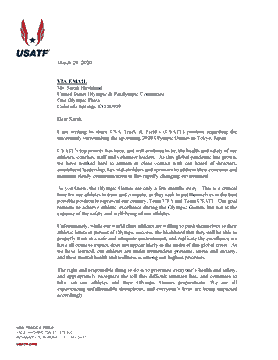 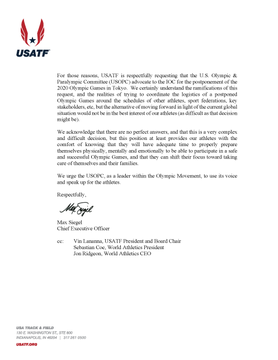 In response to the USA Swimming letter, theU.S. Olympic & Paralympic Committee’s leaders said they were listening to the concerns, and would raise them when the IOC polls the world’s national teams next week.

“Rest assured, we are making your concerns clearly known to them,” they said. “The USOPC will be leaders in providing accurate advice and honest feedback, and be unfailing advocates of the athletes and their safety, and the necessity of a fair platform for the games. You have our promise.”

— With assistance by Irene Garcia Perez