Home » Business » Suez, de-globalization, and a Semiconductor Fab for India

Suez, de-globalization, and a Semiconductor Fab for India

‘If the almost literally heart-stopping Suez block has any positive outcome, it is to be hoped that it will accelerate the setting up of a fab (perhaps Taiwanese) in India,’ asserts Rajeev Srinivasan. 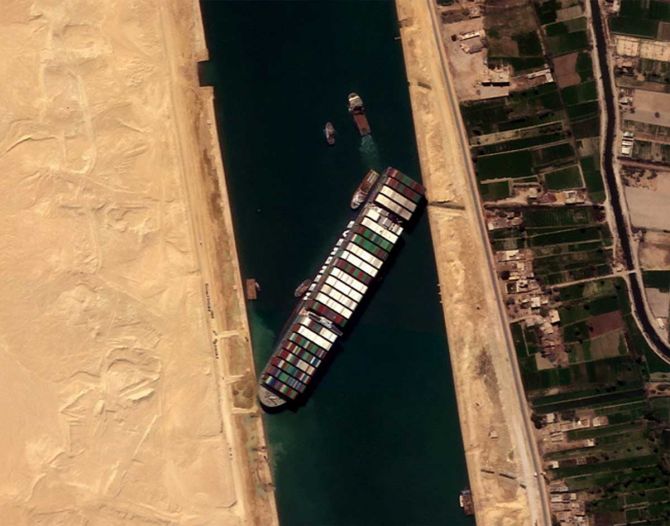 The most vivid analogy for the latest crisis in global supply chains, the Suez Canal blocking by a grounded super-container ship, is that of a heart attack. Just as a block in an artery can lead to disastrous consequences for a human, the blockage of an arterial waterway can disrupt global trade.

The Suez accounts for 12% of the world’s total cargo movement because it is a key transit route between Asia and Europe.

There are ways to mitigate, and, even better, to prevent heart attacks. It is necessary to consider how to do the same for supply chain disruptions.

The simplest mitigation is bypass surgery (or in this case, taking the long route around the Cape of Good Hope, or the more tentative Arctic Route made possible by global warming). Putting in a stent is another (which translates to widening Suez to be, say, two-lane, which has happened, in parts).

In logistics terms, this means reducing the amount of cargo that is being shipped long distance. That is to say, avoid the tyranny of the supply chain by shortening it.

Build near where you sell. In fact, the very antithesis of globalization.

That is paradoxical, considering how very global the ship in question is.

MV EverGiven is Japanese-owned, managed by a Taiwanese company named Evergreen, operated by a German company, has a 25-member crew that is fully Indian, and had on board 2 (mandatory) Egyptian pilots whose job it is to shepherd vessels through the canal without incident.

Before the usual suspects start to lay the blame on the Indian crew, it is worth pointing out that in the canal, the local pilots are, by law, in charge of the ship.

The captain and crew defer to them. So human error probably has to be attributed to them; in addition, there was apparently a severe dust-storm that may have affected the ship’s movements. A retired marine engineer in who has traversed the Suez many times confirmed the above. He also said:

There could be problems with engine maintenance. If there were attempts to finely position the vessel in the wake of the storm, that would depend on how well the engine starts, stops, reverses, etc.

Managements want to keep the boats running, not in drydock; sometimes necessary repairs and maintenance get postponed for too long.

Thus there might be several causes behind the mishap. But squeezing out maximum profits while keeping costs down is something that not only ship managers do (the ship earns money only when it is moving; repair or drydock time is dead time).

This sentiment is what has driven the entire thrust towards supply-chain efficiency, and methodologies like just-in-time that minimize inventory and thus carrying cost.

Perhaps Toyota could do JIT because of Japanese exceptionalism, whereby the suppliers were next door and felt honor-bound to meet their commitments.

That is not true in the real world. For instance, see the vaccine wars: the EU, the US, the UK, etc. are hoarding units, and India is cutting supplies, for various reasons.

In any case, it is illusory to think that inventory disappeared: it was sitting on a ship instead of in your warehouse.

However, Soren Skou, the CEO of Maersk, the largest shipping company in the world, now says the world is moving to “just-in-case”, and multiple suppliers (external link):

We are moving towards a just-in-case supply chain, not just-in-time. This incident [in the Suez Canal] will make people think more about their supply chains…

How much just-in-time do you want to be?

It’s great when it works but when it doesn’t, you lose sales. There’s no just-in-time cost savings that can outweigh the negative of losing sales…

We clearly see our customers saying we need to have multiple suppliers to make sure that one small sub-supplier can’t close us down. It is possible to argue that efficiency is the antithesis of strategy.

Extreme efficiency brings risk. There is no Plan B; there is no slack in the process.

Engineers typically overdesign, and leave a large margin of error to account for unforeseen circumstances.

Over the past couple of decades, managers, especially in America, have thrown this sensible caution to the winds, leaving their companies on a knife-edge, subject to geopolitical and technical risk, in the pursuit of (relatively small) increases in profitability.

The change has even been visible in personnel.

Once upon a time, the smartest young MBAs were hired into sales or finance jobs; but more recently, many have gravitated to being purchasing managers.

They have been ruthless in pruning costs; but they have been unmindful of the risks they are taking. These are now coming back to haunt them. A generation of management consultants and ambitious young MBAs in effect conspired to move the world’s production to China.

There was a supply chain tyranny of groupthink. Oil was cheap so shipping costs were low; China was efficient and skilled at scaling up; thus production was moved offshore.

An extreme case was where chickens reared in the US were slaughtered and shipped to China for processing, and shipped back as packaged food.

But there were unintended consequences.

China moved up the experience curve, getting better and better at manufacturing. Conversely, it hollowed out not only production jobs, but also the knowledge of design for manufacturing back in the consuming countries.

Thus, not only did the jobs migrate, entire industries did, and they are not going back.

This is a double blow: both to developed economies where workers will become permanently unemployable, and to developing economies that will never be able to get a foothold in some industries.

The latter case is the Cargo Cult of today: countries completely dependent on the container ships that bring them what they want. The old David Ricardo theory of comparative advantage, which has been the theoretical basis for offshoring, is now passe.

It has become important for large economies like India to be able to depend on local production. Otherwise, you are subject to crazy geopolitical risk with no warning.

For instance, the Japanese were sandbagged by the Chinese when the latter simply stopped outbound customs clearance of rare earths products, bringing some electronics manufacturers to their knees some years ago.

Chinese can and will use every trick in the book. They view trade as part of “unrestricted warfare”.

This risk must be mitigated: for instance, India must produce its own Active Pharmaceutical Ingredients so that the pharma industry is vertically integrated and not subject to a potential Chinese veto.

The same is true of shipping too: India has to move its container shipping from Colombo (where the Chinese run part of the facilities under long lease) to the under-construction port at Vizhinjam as soon as possible. The larger picture is that the Suez incident is going to make more nations wary of China, if the pandemic hadn’t already done so. This also makes marine choke points more interesting: Most notably the Straits of Malacca.

An EverGiven-style accident (or more ominously, a military blockade) there would bring the Chinese economy to its knees — and so would similar action in the Straits of Hormuz off Iran. There were threats earlier that Iran might deliberately sink ships to impede the flow of oil from the Persian Gulf.

China is painfully aware of this, and it partly explains their debt-trap diplomacy habit of acquiring port assets all over the world, and their focus on Gwadar in Baluchistan, and the proposed Isthmus of Kra canal in Thailand: these are ways to bypass Malacca (and so is much of the Belt and Road Initiative).

Incidentally, India with its Andaman and Nicobar command can keep a close eye on Malacca.

China is in fact the ultimate loser in the Suez incident, because it makes it difficult for other nations like India to ignore the elephant in the room: Their vulnerability and therefore the need to decouple China from their supply chains.

Autarky is no longer a bad word. But we also have to be realistic about our lack of certain capabilities or resources.

Even though we tend to blame the Chinese for the theft of intellectual property and reverse-engineering, other capabilities have been less visible: on the one hand, government mercantilism such as in hidden financing (often at rates that approach 0%) and in cornering strategic resources (eg. lithium, cobalt, rare earths). On the other, in tooling.

A mechanical engineer who runs a robotics company in Bangalore told me the following when I asked him what his main challenge from the Chinese was:

It takes me maybe 18 months to get the product all tooled up; but when I start shipping it, the Chinese guy will reverse-engineer and tool it up in 2-3 months. So he will have a product competing directly with mine within 3-4 months, at a lower cost.

So I am desperately running as fast as I can just to stay ahead for that short window of opportunity. In a sense, India has lost an entire generation of mechanical engineers (and civil engineers) because they were all absorbed by the IT industry to do offshored services work.

This, in a larger national sense, has been a tragedy. We now have to painstakingly build that capability up all over again.

But this is literally the best time to do that; in fact, we do not have a choice.

In the most strategic industries, India is far behind; in some cases, so far behind as to be non-existent. For instance, consider semiconductors. It is imperative that India not be dependent on anybody else for chips.

There’s a global shortage of chips now, and there is not a single semiconductor fabrication plant in India. This is a critical deficiency.

Today, yes, India can do chip designs and get them fabricated by merchant foundries such as TSMC. Tomorrow?

Taiwan’s TSMC is dominant in the most advanced chips — those under 10-nanometers, and is currently building a next-generation 3-nanometer plant (external link). It has overtaken the US’s Intel and Korea’s Samsung.

Intel is now forced to respond with a $20 billion investment in two fabs in the US.

There are huge geopolitical risks for India (and the rest of the world) from various issues.

What if the Chinese invade Taiwan?

They are threatening every day to do so: the latest is an incursion of 20 Chinese planes into Taiwanese air space (external link). There is another, unforeseen problem: Water. Taiwan is going through a bad drought, and fabs are facing a big problem with not enough clean water (external link). A chip engineer told me:

Clean room setup and many gallons of clean water are needed.

Some years back, there was this push to set up a fab in Hyderabad; and it went nowhere because of water requirements. We have to fix that problem as well.

The Taiwanese are quite aware of the dangers from a potential Chinese invasion, or even of a blockade.

This is the best time for India to put on a hard sell to attract TSMC to set up a fab in some part of India which has sufficient water and the requisite other infrastructure.

If the almost literally heart-stopping Suez block has any positive outcome, it is to be hoped that it will accelerate the setting up of a fab (perhaps Taiwanese) in India.

(UPDATE: As of March 29, the MV EverGiven has been floated free after a 6 day-long emergency operation.)