Home » Business » Shell just gave a 75-page presentation on its clean energy push. See the 8 key slides that lay out how the energy giant plans to make money while slowly ditching fossil fuels.

Shell just gave a 75-page presentation on its clean energy push. See the 8 key slides that lay out how the energy giant plans to make money while slowly ditching fossil fuels.

Royal Dutch Shell, a century-old company that has long been rooted in oil production, unveiled on Thursday new details about its push into cleaner sources of energy, as part of a pledge to reduce its emissions, on net, to zero by 2050.

Shell CEO Ben van Beurden told investors that the company’s oil production and its overall emissions have already peaked, in 2019 and 2018, respectively. Going forward oil production will shrink up to 2% each year, the company said.

Shell intends to maintain its massive footprint in the energy industry by pairing the decline in oil with an increase in other products that have lower emissions including clean hydrogen and electricity.

“Shell must change what we sell,” van Beurden said during the presentation to investors.

The company aims to double the amount of electricity it sells over the next decade, for example. It also plans to increase the number of electric vehicle charging points.

Most major European oil companies including BP are rewriting their strategies to reduce their emissions, though their approaches vary. Total, for example, is focusing on building out physical assets that produce clean energy such as solar fields and wind farms.

Shell also said Thursday it would aim to increase its dividend per share by about 4% each year. The energy giant cut its dividend last spring, following the collapse in oil prices, for the first time since World War II.

We picked out 8 slides from Shell’s 75-page presentation that lay out how the company plans to stay relevant and make money while slowly ditching fossil fuels.

Shell announced new targets to reduce the 'intensity' of emissions over the next three decades. 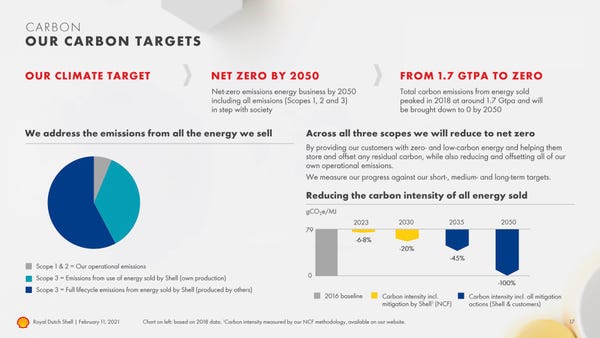 Shell’s total greenhouse-gas emissions peaked in 2018, the company said. It will gradually reduce its emissions to net-zero by 2050.

Importantly, the targets encompass emissions associated with the products Shell sells, not just those it produces through its own operations.

To get there, the oil giant will build business units focused on products like electricity and biofuels. 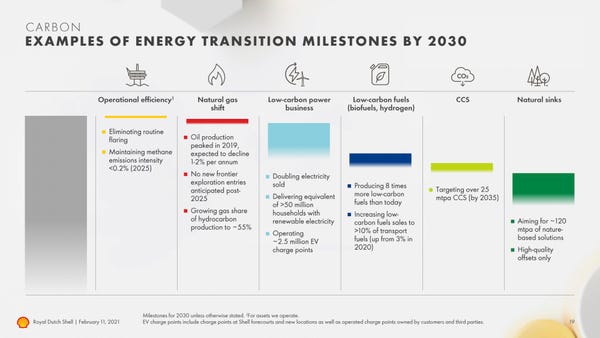 The company aims to double the amount of electricity it sells by 2030 and operate 2.5 million charging points for electric vehicles. It will also build out its business for natural gas.

To aid in emissions reductions, Shell will bolster its capacity to remove carbon dioxide from the air, using both natural sinks (such as forests) and machines that capture the gas. 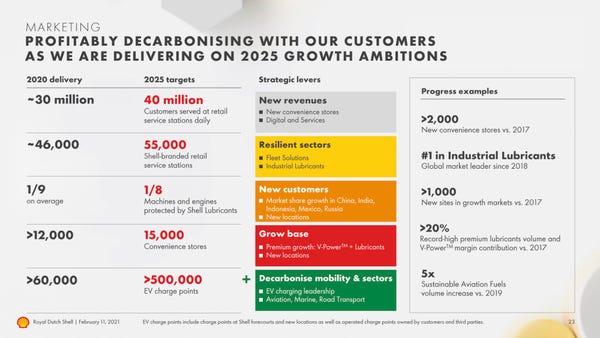 Shell, like some other oil majors, has a massive retail footprint.

It operates 46,000 retail service stations including gas stations, and it will lean on them as it rolls out products like lower-carbon aviation fuel and charging points for electric cars.

For comparison, McDonald’s has about 36,000 restaurants globally.

That means gas stations of the future will look pretty different. 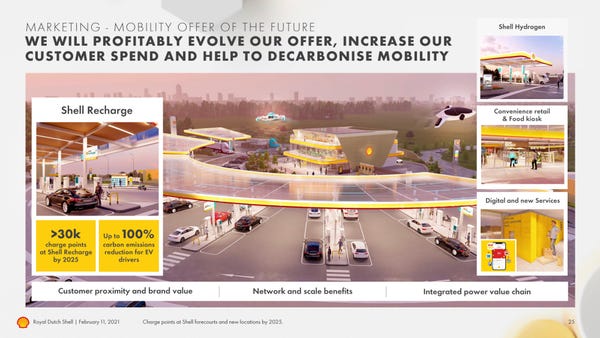 By 2050, a Shell gas station will likely include charging stations for electric cars and perhaps even a place to refuel vehicles powered by hydrogen fuel cells.

The company wants to sell a lot of electricity, operating almost like a utility. 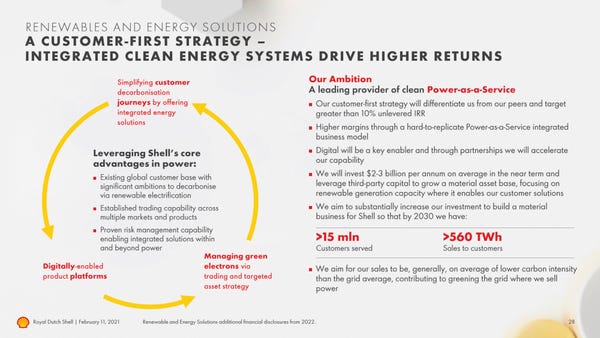 It’s easy to forget that oil giants are also giants in a lot of other ways. Shell, for example, is among the three largest wholesale power traders in North America.

And it has ambitions to become bigger. The company wants to sell 560 terawatt-hours a year of electricity by 2030, double what it sells today.

Shell says it aims to sell cleaner electrons, compared to those present on the grid, though it didn’t offer details.

Hydrogen gas will play a big role in its low-carbon push. 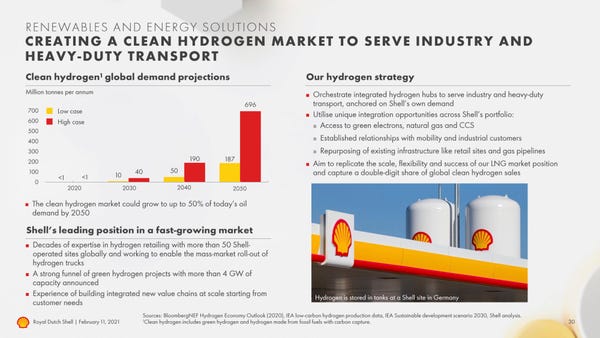 Demand for hydrogen, used in industrial processes and for clean transportation, is set to balloon over the next three decades, Shell says.

The company wants to position itself as a major retailer, noting that it has “decades of expertise in hydrogen retailing.” One clear benefit is that Shell can sell hydrogen through its large gas station chain and modify its pipes to transport the fuel.

Shell will begin by supplying hydrogen for its own use. By 2035, it will have a huge network of refueling stations. 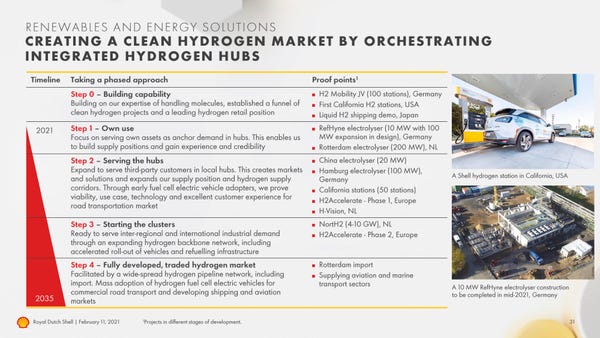 However, fuel-cell-powered cars are likely to remain just a sliver of global vehicle sales, even as far out as 2050, according to the research firm Wood Mackenzie.

The majority of vehicles sold in 2050 will be electric or plug-in hybrids, the firm said.

Still, the majority of Shell's project budget will go towards fossil fuels in the near term. 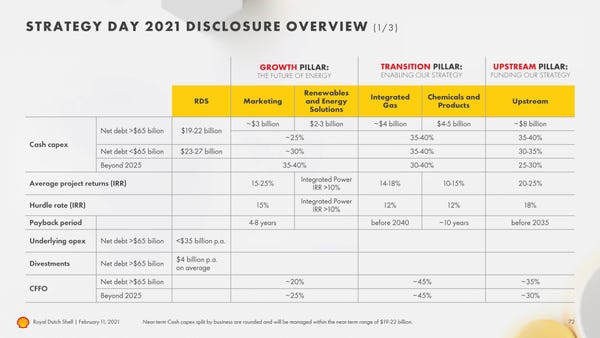 Shell plans to spend up to $22 billion on capital expenses in the near term, and most of that will go towards producing oil and gas.

Up to $6 billion will go towards renewables, electricity sales, and marketing, which includes fuels and lubricants, the company said.

Part of the reason why fossil fuels will still dominate its business is that they yield much larger returns compared to renewables, as this slide shows. Shell will lean on oil and gas to fund its transformation.