The company said Wednesday that in the three months ending on September 30, sales at global restaurants open at least 13 months jumped 12.7% compared to the same period last year. Total revenue jumped about 14% to $6.2 billion in the quarter compared to the third quarter last year, when revenues suffered because of the pandemic.
Higher ingredient and labor costs, among other things, have prompted restaurants to raise prices. But so far, many customers aren’t blinking. McDonald’s reported that transactions -— or the number of orders being placed — were positive in the quarter compared to last year, and that order sizes have been getting larger in the United States. 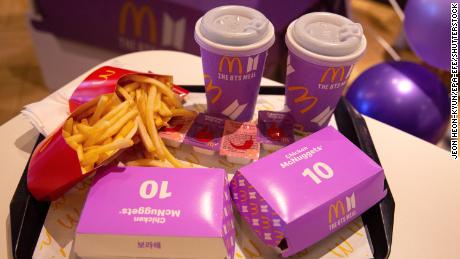 The company expects menu prices to be about 6% higher in 2021 compared to 2020, said CEO Chris Kempczinski during an analyst call discussing the quarterly results Wednesday. The increase “has been pretty well received by customers” so far, he said.

McDonald’s also expects customers to continue spending more per order, and not just because of higher prices.

During the pandemic, order sizes ticked up as people picked up food for groups, rather than just for themselves.
“If you’re getting delivery, you’re getting it for your family or for at least a couple of people,” said CFO Kevin Ozan during Wednesday’s call. Early in the pandemic, McDonald’s expected those larger orders to slim down as things got back to normal. But “we are seeing those larger order sizes continue,” Ozan said. “I think at least some of that will be stickier than we originally may have thought.”
Chipotle (CMG), which has been raising its prices this year, also reported a sales spike in the third quarter.
McDonald’s (MCD) has been using its famous Orders program, a series of limited-edition meals that has featured partnerships with musical artists Saweetie, BTS, J Balvin and Travis Scott, to create buzz and entice customers. The Travis Scott meal, the first in the new platform, was so popular that it caused some locations to run out of some ingredients used in the meal after it launched last year.

The program has also prompted some copy-cat meals. Burger King and others have since announced their own celebrity partnerships.
McDonald’s chicken sandwiches, introduced early this year, have also helped. “In the US, Crispy Chicken Sandwich sales continue to exceed expectations,” Kempczinski said during the call, adding that the item has helped McDonald’s grow its chicken market share in the fast food space. With the new sandwiches, the burger chain has jumped on a trend that has helped increase sales at rivals like Popeyes.
Source: Read Full Article