New York (CNN Business)It’s been a big year for America’s oat milk fans — and the companies serving them.

In March, Starbucks rolled out the option only to sell out a month later. Silk added oat milk to its line of plant-based milks in April. Oatly had a splashy IPO in May. And a slew of new ad campaigns, with jaunty music and cheeky banter, are vying for shoppers’ attention.
That’s because there’s a lot of money at stake for brands selling the increasingly popular dairy alternative. Sales of the item were about $316.4 million in US retail in the year ending on May 29, according to Nielsen. That’s still a small market compared to non-dairy milk alternatives overall, about $2.2 billion. But oat milk is up about 1200% percent over the past two years.

That means that in North America, there may well be an even bigger oat milk boom coming. And with Oatly, the Swedish company that helped popularize the product, still struggling to meet demand as it works to expand production capacity, it’s a perfect time for competitors like Danone, Planet Oat maker HP Hood and Chobani to snatch up some share in the new, fragmented category, where the race is still close enough for players to have a chance to jostle for the top spot.

“There’s going to be a lot of competition on this front,” said Maria Mascaraque, who oversees food and nutrition research at Euromonitor.

Oatly arrives on the scene 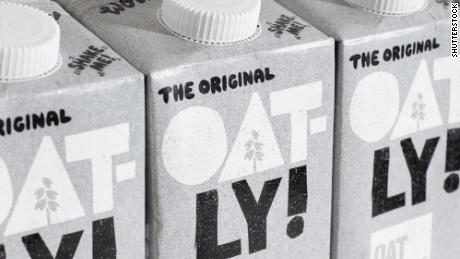 Oatly first launched its oat milk in 1995. The company’s signature product did not arrive in the United States until 2017, “targeting coffee’s tastemakers, professional baristas at independent coffee shops,” according to the company’s IPO prospectus. By the end of last year, Oatly was available in over 7,500 retail locations and about 10,000 coffee shops, Oatly said, including Starbucks locations.
Oatly has captured the attention of US shoppers not only with its products, which include oat-based ice cream and oat milk, but with its brassy ad campaigns. Some examples of Oatly’s ads: “You actually read this? Total success!” and “We spent an insane amount of money on this fancy billboard. Hope someone interested in oat drink sees it.”
The brand also made waves with its Super Bowl commercial earlier this year. Oatly ran a spot featuring CEO Toni Petersson playing a keyboard and singing a repetitive song, with lyrics “Wow! No Cow,” in a field. Oatly gave away “I totally hated that Oatly commercial” t-shirts after people responded poorly to the spot.
This spring, the company debuted on the Nasdaq with a $10 billion valuation. Initially priced at $17 a share, the company’s stock price is now up to about $27.50.
Analysts feel good about Oatly’s chances. “We view Oatly as a long-term growth story that is just beginning,” Guggenheim analyst Laurent Grandet wrote in a note on Monday. At Jefferies, analysts wrote this week that Oatly “has a long runway for sustained, elevated growth and margin expansion” compared to peers in the consumer packaged goods space.
And while almond milk is still the leading plant-based milk category in the United States, oat milk sales have exceeded those of both almond and soy milks in the United Kingdom and Germany over the past few years, Oatly noted in its IPO prospectus, citing Nielsen and IRI data.
But Oatly’s success has been a double-edged sword. The company has not been able to keep up with demand. “Despite ongoing efforts to increase our production capacity, our current supply, processing and manufacturing capabilities are insufficient to meet our present business needs,” Oatly wrote in the prospectus.
“The adoption, acceleration and enthusiasm [for Oatly] has exceeded our expectations,” Mike Messersmith, Oatly’s president of North America, told CNN Business. “It is always a constantly evolving challenge to be able to meet those needs.” To meet demand, Oatly has to expand its production capabilities — something it plans to do with money raised from the IPO.
The company is in a “transition” period this year, said Guggenheim’s Grandet. Eventually, Oatly will overcome the gap and have enough product, he predicts. But in the interim, if grocers or coffee shops are unable to stock their shelves with Oatly’s product, they could turn to a competitor.
“There is a risk that competitors take their shelf [space], and build that connection with consumers,” Grandet said. 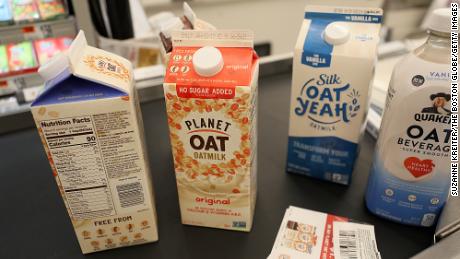 HP Hood, the company behind Planet Oat, and Danone, famous for its dairy, yogurt and plant-based milk brands, are also serious about oat milk. And recently, they’ve been vying for customer attention with new strategies and marketing efforts.
For HP Hood, a legacy dairy brand, it’s been especially important to pivot to plant-based alternatives as cow’s milk loses favor with customers.
“Creating Planet Oat was a way of giving [consumers] what they wanted,” said Chris Ross, SVP of marketing and research and development at HP Hood LLC. This year, HP Hood is projecting that it will spend about $30 million on promoting Planet Oat. Next year, it expects to spend more.
“Every year, [the oat milk market] gets more and more competitive,” Ross said. Recently, Planet Oat launched a “#wesolvedmilk” campaign, which describes the product and showcases how easily it can be swapped out for cow’s and other milk.
But it has some competition in addition to Oatly. 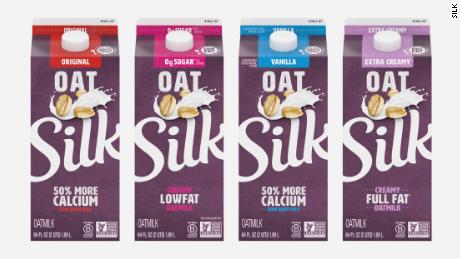 Danone initially started selling oat milk under the brand Oat Yeah in 2019, under the Silk umbrella. But now it is pursuing Silk customers more directly. In April, it relaunched the product as Silk Oatmilk, boasting a new recipe.
The company has also started advertising Silk Oatmilk as part of its “Milk of the Land” campaign touting its plant-based products. The oat milk commercial, with rousing music playing in the background, shows people drinking oat milk straight, dunking a cookie in a glassful and slurping from a cereal bowl.
Silk’s portfolio already includes coconut, almond and soy. By introducing Silk Oatmilk, Danone wants to convince customers who already choose Silk for soy or almond to go with the brand for oat milk.
“We see the opportunity and we intend to be more assertive in the space,” Shane Grant, CEO of Danone North America, told CNN Business in an email. 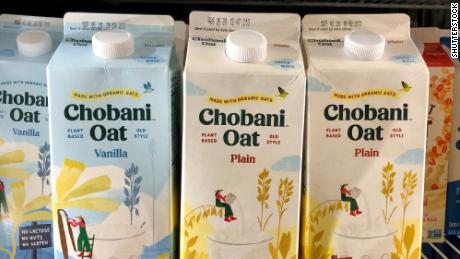 Chobani introduced a slew of oat products in 2019. For Chobani lovers, that means more options from the brand — from oat milk to oat-based yogurt to coffee made with oat milk.
The company is betting on those customers wanting to try anything under the Chobani umbrella. “We’re getting the trial with the Chobani name,” said Peter McGuinness, the company’s president and chief operating officer.
The company has also invested in making oat milk in its own facilities, McGuinness said. “We basically built a factory within a factory,” he told CNN Business earlier this year. That approach can help it prevent shortages.

As established companies jostle for space, smaller upstarts will have the opportunity to distinguish themselves, as well.
Some examples: Califia has a protein oat milk which could help set it apart with customers who are specifically looking for a protein boost. A company called Three Trees makes an oat and seed milk blend. Others are leading with specific credentials: Minor Figures prioritizes oat milk for coffee, for example, and Happy Planet advertises its environmental credentials. Who knows what other oat milk options will hit your nearest grocery store next.
Source: Read Full Article