The conversation would have stayed private if not for the live mics that Utah Jazz guard Donovan Mitchell and coach Quin Snyder wore. Instead, the talk offered a window both into their relationship and the challenges that Mitchell faced in a pivotal playoff game.

“You just keep getting your mind right, and it overcomes everything,” Snyder told Mitchell. “Just like you’re doing, okay? Let’s go!”

The two then shook hands. Moments later, Mitchell then played a crucial part in the Jazz’s 112-109 win over the Los Angeles Clippers on Tuesday in Game 1 of the Western Conference semifinals. He finished with 45 points while shooting 16-of-30 from the field and 6-of-15 from 3-point range. This happened after scoring only 13 first-half points on a 5-of-14 clip.

So when he entered the locker room at halftime, Mitchell recalled announcing aloud that, “I’m going to have to find a way.” But when he spoke with Snyder before the start of the third quarter, they touched on something heavier than just just X’s and O’s. After nursing a right ankle injury that sidelined him for the final 16 regular-season games and a Game 1 first-round loss to the Memphis Grizzlies, Mitchell dealt with a new ailment.

“I don’t think he was feeling great tonight,” Snyder said. “His ankle was fine. But he wasn’t feeling great physically. He was a little nauseous and a little lightheaded. He’s not going to accept that.”

The Jazz and their fanbase remain haunted with former Chicago Bulls star Michael Jordan thriving in Game 5 of the 1997 NBA Finals in what became known as the “flu game.” As "The Last Dance" documentary revealed last year, it should have actually been called “the food poisoning game.” Nearly 24 years later, Mitchell became the star player that inspired the Jazz for how he played through the elements. 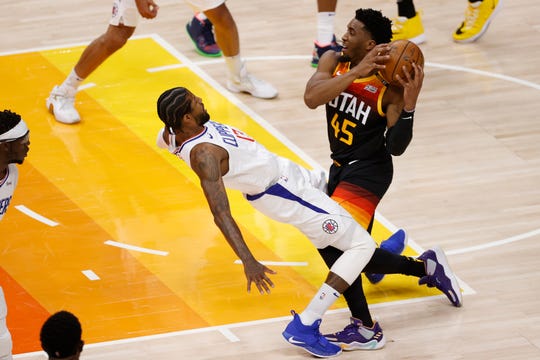