Global business travel – and airline profits – are in deep trouble from coronavirus if the evidence offered at London City airport on a weekday morning is indicative of the sector’s travails.

On Wednesday, the business travel-dominated airport in the shadow of Canary Wharf had as many check-in staff as there were passengers, with customers reporting a decline in demand from European hubs such as Amsterdam and Frankfurt.

What is the coronavirus and should we be worried?

It is caused by a member of the coronavirus family that has never been encountered before. Like other coronaviruses, it has come from animals. Many of those initially infected either worked or frequently shopped in the Huanan seafood wholesale market in the centre of the Chinese city.

Severe acute respiratory syndrome (Sars) and Middle Eastern respiratory syndrome (Mers) are both caused by coronaviruses that came from animals. In 2002, Sars spread virtually unchecked to 37 countries, causing global panic, infecting more than 8,000 people and killing more than 750. Mers appears to be less easily passed from human to human, but has greater lethality, killing 35% of about 2,500 people who have been infected.

The virus can cause pneumonia. Those who have fallen ill are reported to suffer coughs, fever and breathing difficulties. In severe cases there can be organ failure. As this is viral pneumonia, antibiotics are of no use. The antiviral drugs we have against flu will not work. Recovery depends on the strength of the immune system. Many of those who have died were already in poor health.

UK Chief Medical Officers are advising anyone who has travelled to the UK from mainland China, Thailand, Japan, Republic of Korea, Hong Kong, Taiwan, Singapore, Malaysia or Macau in the last 14 days and who is experiencing a cough or fever or shortness of breath to stay indoors and call NHS 111, even if symptoms are mild.

China’s national health commission has confirmed human-to-human transmission, and there have been such transmissions elsewhere.

We don’t yet know how dangerous the new coronavirus is, and we won’t know until more data comes in. The mortality rate is around 2% at the centre of the outbreak, Hubei province, and less than that elsewhere. For comparison, seasonal flu typically has a mortality rate below 1% and is thought to cause about 400,000 deaths each year globally. Sars had a death rate of more than 10%.

Another key unknown is how contagious the coronavirus is. A crucial difference is that unlike flu, there is no vaccine for the new coronavirus, which means it is more difficult for vulnerable members of the population – elderly people or those with existing respiratory or immune problems – to protect themselves. Hand-washing and avoiding other people if you feel unwell are important. One sensible step is to get the flu vaccine, which will reduce the burden on health services if the outbreak turns into a wider epidemic.

A pandemic, in WHO terms, is “the worldwide spread of a disease”. Coronavirus cases have been confirmed outside China, but by no means in all 195 countries on the WHO’s list. It is also not spreading within those countries at the moment, except in a very few cases. By far the majority of cases are travellers who picked up the virus in China.

No. The spread of the virus outside China is worrying but not an unexpected development. The WHO has declared the outbreak to be a public health emergency of international concern. The key issues are how transmissible this new coronavirus is between people, and what proportion become severely ill and end up in hospital. Often viruses that spread easily tend to have a milder impact. Generally, the coronavirus appears to be hitting older people hardest, with few cases in children.

“The plane was half-empty,” said Andrew Ross, who works in construction in the Netherlands and flies from Amsterdam to London a few times each year. “I wouldn’t have expected it – it’s usually busier. But it was nice and quiet.”

Just landed from Frankfurt, Kim Vaughan said there were fewer than 30 passengers on her flight. “It was a bigger plane, and it was almost completely empty,” Vaughan said. Jilles Visser, a Dutch electrician on a work trip from Rotterdam, thought his BA-operated flight was “very empty”.

Barbara Bullmann, a teacher from Dortmund, was leading a group of 34 schoolchildren on a trip to their partner school in Scotland and was connecting through City airport on the way to Glasgow.

She said the school had discussed postponing the trip due to coronavirus concerns but had not wanted it to get in the way of celebrations to mark 30 years of exchanges between the Scottish and German schools.

Airlines have experienced a drop in global business travel, far beyond Asia and the original source of the outbreak, as companies have imposed travel restrictions and big industry events have been cancelled.

Business travel differs from leisure travel, according to the aviation consultant John Strickland. “Once it is lost it is lost. I think some companies will have taken the chance to economise on budgets if they can,” he said. “Some events which can be substituted by a phone call or a video conference won’t be repeated.” 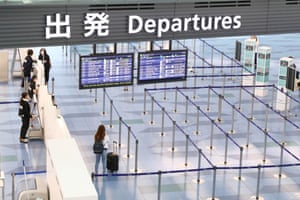 Strickland points to lost travel due to the cancellation of large trade shows including the ITB travel fair, which was due to take place in Berlin from 4-8 March, and Barcelona’s Mobile World Congress.

Business passengers generate the majority of revenue for airlines, even though 80% of travellers tended to take a flight for leisure purposes, said Chris Tarry, an aviation analyst.

“The business market is important as it is less sensitive to fares. The impact is more immediate as they book much nearer to the date. If there are travel restrictions that will break through to the airlines very quickly,” he said.

Airline shares have been among those badly affected by the deep sell-offs on financial markets at the end of February, as investors panicked that the spread of Covid-19 could dent global growth.

While the spread of coronavirus continues, the longer-term impact on passenger numbers is unclear. The aviation industry has previously experienced other severe drops in demand, such as those related to the Sars outbreak in 2003 as well as 9/11.

Analysts say many airlines are waiting to see how passengers react over the busy Easter travel period, a time when many go abroad for leisure.

“Once it is over, then we will see stimulation of the market – lower fares,” said Tarry. “At a certain point, price overcomes fear. People think, that is a bargain, I’ll go.”