In a decision favoring 26 protesters who alleged they were brutalized by officers during demonstrations last year, Chief U.S. District Judge Algenon L. Marbley wrote that some officers “had no regard for the rights secured by this bedrock principle of American democracy. This case is the sad tale of police officers, clothed with the awesome power of the state, run amok.”

Marbley, who opened his 88-page decision Friday with a quote from Martin Luther King Jr., also barred police from inflicting “pain or punishment to deter nonviolent protesters” — those who “are chanting, verbally confronting police, sitting, holding their hands up when approaching police, occupying streets or sidewalks, and/or passively resisting police orders.” 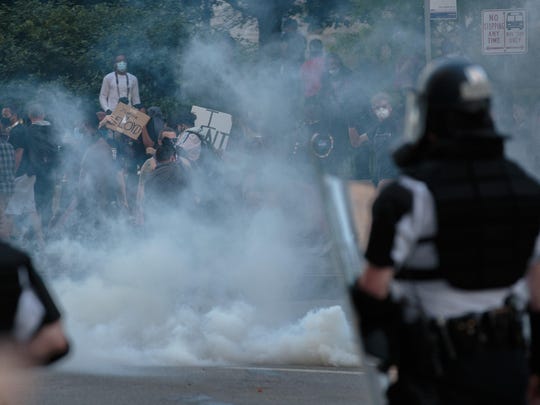 The ruling requires Columbus police to ensure body and vehicle cameras “are in good working order and used during every interaction” with nonviolent protesters, and that officers’ badge numbers and/or identity cards are clearly displayed “even when riot gear is worn.”

John Marshall, lead attorney for plaintiffs in the case, said the decision “will have a significant impact on the ability of the Columbus police to inflict violence against lawful protesters.”

“We captured through eye witness testimony and by combing through thousands of hours of video, including body cams, what really happened on the streets of Columbus during the Black Lives Matter protests,” Marshall said. “And what really happened was that the police vindictively attacked lawful and peaceful protesters, we believe, because they were protesting against the very violence that the police have long inflicted on communities of color.”

The protesters sued the city in U.S. District Court in Columbus, alleging they were brutalized by police during protests following the May 25 death of George Floyd last year at the hands of former Minneapolis officer Derek Chauvin, who was recently convicted of murder in the case.

Racial injustice protests over Floyd’s death began in Columbus on May 28 and continued into July.

Plaintiffs said in court filings that they were “dedicated to nonviolent protest, including civil disobedience of traffic, parade and mass-gathering regulations to generate urgent widespread public attention to the historic and continuing police violence directed overwhelmingly at communities and people of color condoned by mostly white police supervisors and administrators,” according to documents.

‘A fanciful reality’: Trump claims Black Lives Matter protests are violent, but the majority are peaceful

Much of the118-page amended complaint, filed in September, described in detail incidents of what the plaintiffs say was police brutality against nonviolent protesters. The filing included photos of bloody gashes, broken bones and large bruises caused by wooden bullets or from protesters being thrown to the ground by officers, plaintiffs alleged.

Attorneys for the officers and other defendants countered that the city supports peaceful and lawful protest and already “prohibits unjust or prejudicial treatment based on race or color as well as the use of excessive or punitive force.”

They reiterated in court filings that policies and procedures were in place to protect and prioritize citizens’ right to “peacefully and lawfully protest” and “prohibit police from retaliating against protesters based on their speech and from using excessive and punitive force.”

They also noted that the city has revised policies to address issues raised in the lawsuit and that “sizable protests pertaining to allegations of police brutality” have taken place in Columbus “with no uses of force at all.”

Plaintiffs asked the court to issue an injunction barring Columbus police from using pepper spray, wooden bullets and other non-lethal weapons against nonviolent protesters, plus compensation for how they were treated by officers.

Similar lawsuits were filed elsewhere. A federal judge restricted Los Angeles police from using projectile launchers against protesters. A similar decision was issued by a federal judge in Oregon.

More than 800 complaints related to police actions during the Columbus protests were submitted to the city. A subsequent investigation by BakerHostetler, the law firm hired by the city, resulted in 49 reports, though only eight involved sustained allegations and one resulted in discipline. That officer was given documented counseling for not filing the proper paperwork.

The city also hired a retired FBI agent to investigate any potential criminal misconduct by officers during last year’s protests. To date, no charges have been filed.