No, Judge Judy wasn’t at the Grammys – but DaBaby’s performance sure made fans do a double take.

Many social media users speculated that the well-known TV judge made an appearance during music’s biggest night Sunday, judging by the rapper’s performance of his record-of-the-year-nominated “Rockstar,” which featured an elderly gospel choir dressed in judge robes. 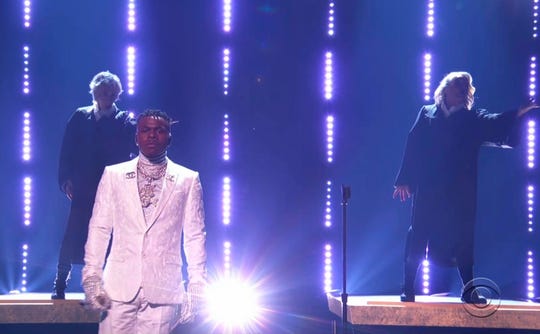 In this video grab provided by CBS and the Recording Academy, DaBaby performs at the 63rd annual Grammy Awards on Sunday, March 14, 2021. (Photo: AP)

DaBaby and Roddy Ricch offered up a dramatic rendition of their smash summer hit, complete with a violinist. But, it was the rapper’s overly animated background singers that caught everyone’s attention. The choir sang and danced along to DaBaby, who was dressed in an all-white suit paired with Michael Jackson-inspired bedazzled gloves.

“Kinda living for DaBaby’s old lady judge back up singer/dancers,” @awards_watch tweeted. User @ByBradenShaw added: “Judge Judy choir was a bold choice for this DaBaby performance but I respect it.”

Another user said the performers seemed to resemble another notable judicial figure.

“Bruh, I am vibing with the white Judges in the background of Da Baby’s performance lol!” the user wrote. “RBG and Judge Judy got swag!”

You may wonder, why judges? DaBaby may be making light of his previous run-ins with authorities, most recently in January for allegedly carrying a concealed weapon in Beverly Hills.

“Brand new Lamborghini, (expletive) a cop car,” he raps. “With the pistol on my hip like I’m a cop. Have you ever met a real (expletive) rockstar? This ain’t no guitar, (expletive), this a Glock.”

Biden encourages businesses to take advantage of the employee retention credit. Here's what you need to know

Panic buying is emptying gas pumps across the Southeast