Home » Business » Inflation is back as the US economy reopens

Inflation is back as the US economy reopens

New York (CNN Business)People are paying higher prices for everything from diapers to gas. One discount chain says that’s great for its business.

Five Below (FIVE), the toy, game, room decoration and tech accessory store that sells most of its stuff for — as its name suggests — under $5, expects budget-conscious consumers will increasingly turn to discount stores as prices go up.
“As far as inflation goes…I think it’s an advantage for a value retailer like us,” Five Below CEO Joel Anderson told analysts on its earnings call Thursday. When prices rise or economic conditions weaken, he said, “value becomes even more important” to shoppers.

Rising costs for goods, transportation and wages typically squeeze companies’ profits, but Anderson said Five Below can combat the pressures without denting its bottom line or pivoting its strategy because it started selling some items for up to $10 in 2019.

Other chains may benefit from consumers hunting for bargains on everything from food to clothing, including Walmart (WMT), Costco (COST) and Dollar General (DG), UBS analyst Michael Lasser said in a note to clients Wednesday. 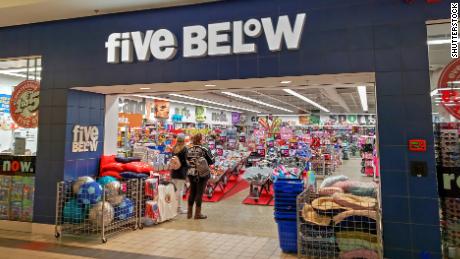 “Value wins in times of economic disruption. Consumers trade down, and value oriented retailers gain new customers and market share,” analyst Randal Konik from Jefferies said in a note last week.
But not every discount retailer may be in a position to benefit.
Dollar Tree (DLTR) has a decades-long strategy of selling nearly all of its merchandise for $1, so it can’t offset cost increases on the goods it buys from its suppliers or rising transportation costs by raising prices for consumers without detracting from that approach.
Grocery Outlet (GO), a discount supermarket chain, had its stock downgraded by Konik on Friday because he believes “inflationary cost pressures across wages, freight, and product” will reduce its profit growth.

There’s another big risk from inflation for retailers, too. As prices rise, consumers may not have as much money to spend at stores. This is a particular challenge for chains that cater mainly to low-income customers, such as Dollar General (DG).
“Inflation is a risk to customer health,” Scot Ciccarelli from RBC Capital Markets said in a note Thursday. “Food and gas prices continue to rise, which squeezes the wallets of the company’s existing core customer base.”
Source: Read Full Article