Home » Business » How to fix our food delivery trash problem

How to fix our food delivery trash problem

But every time he finished a meal, he noticed he was left with a lot of garbage.
In fact, New York residents used more than 23 billion disposable food service items in 2016, according to a report from the Overbrook Foundation, a human rights and environmental advocacy group.

To help solve the problem, Farbiarz founded DeliverZero, a zero-waste delivery company that aims to tackle the city’s growing mountain of takeout trash.

The company provides plastic, reusable containers to participating restaurants, and when customers order from their favorite New York City joints via the DeliverZero app or website, their food is delivered in the containers. Customers then hold on to the containers and return them to a delivery courier the next time they order food from a DeliverZero restaurant. To date, at least 135 restaurants in three of New York City’s five boroughs have joined the program.
Like other food delivery giants, DeliverZero takes a commission from restaurants on each order, and the process of ordering and receiving food is similar to what customers are used to with other apps. Farbiarz said he and his co-founders aim to compete with food delivery heavyweights.
“We have built our service quite intentionally to have the look and feel — both for the customer and for the restaurant — of Grubhub, Seamless, Postmates (and) Uber Eats,” Farbiarz said.
The big difference is DeliverZero’s reusable polypropylene and BPA-free containers.
If a customer doesn’t return the containers to either a courier or a DeliverZero restaurant within six weeks of their initial order, they are charged $3.25 per box, plus tax. Besides this potential fee, there is no extra cost to DeliverZero customers. 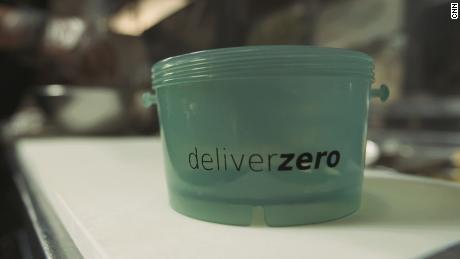 Spiro Hiotis, the owner of Athena Mediterranean Cuisine in Brooklyn’s Park Slope neighborhood, said using DeliverZero for his business is a win-win: DeliverZero provides its reusable boxes for free, which saves him money, and he said the startup takes a lower commission fee than some of its larger competitors.
Hiotis said takeout and delivery orders at Athena have exploded during the pandemic.
“It’s unbelievable — people ordering all the time,” said Hiotis, who opened the Greek restaurant 13 years ago. “We always were busy with deliveries and takeouts. But now it’s at least 40% higher (than before the pandemic).”
Farbiarz hopes that DeliverZero will help customers see single-use items in a new way.
“Once you start thinking about single-use, you will see single-use everywhere,” he said. “When our customers see that they can reuse takeout containers, it opens (their) eyes to the single-use container in the grocery store. It opens your eyes to the fact that you may have worn a shirt three times and you’re thinking about throwing it away.” 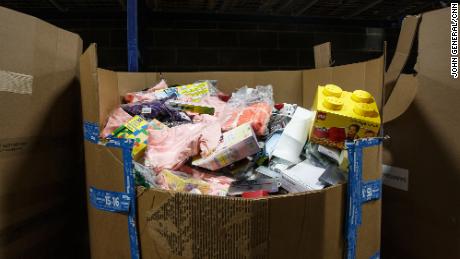 DeliverZero isn’t the only service trying to tackle the takeout waste problem.
GO Box services more than 100 restaurants in the Portland, Oregon area, and charges customers a subscription to use its containers, which they can use to pick up food from restaurants. And Durham, North Carolina-based Green-to-Go also has a network of participating restaurants and requires users to pay for a subscription that starts at $25 per year.

Just reducing New York’s takeout waste problem would be huge, but DeliverZero has even loftier goals. In the next 18 months, Farbiarz and his team plan to continue expanding in New York, as well as bring the service to Los Angeles and Amsterdam. Long-term, he wants to build a more sustainable world and has dreams of creating a larger network of reusable containers that could be used at grocery stores, delis, or coffee carts.
“I think about my kids,” said Farbiarz, who has two young daughters. “I want them to grow up in a world that is sensible, that is responsible, that isn’t warming.”
Source: Read Full Article