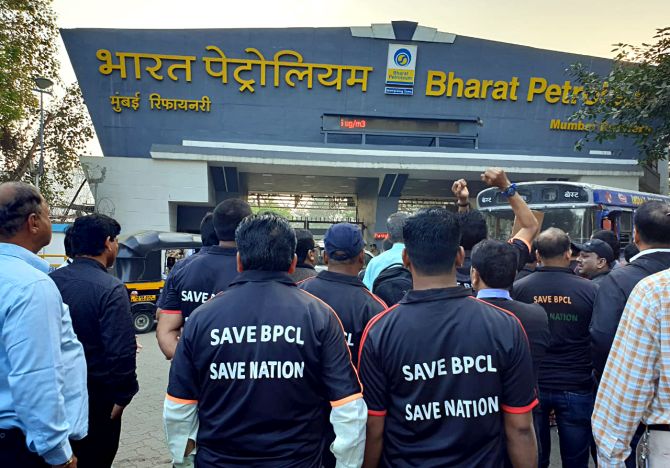 The government on Saturday invited bids for a majority stake in Bharat Petroleum Corp Ltd (BPCL), more than three months after the Union Cabinet approved the strategic divestment. Private companies with a net worth of over $10 billion (Rs 74,000 crore) will be eligible to bid by May 2.

The department of investment and public asset management made it clear that none of the public sector undertakings will be allowed to participate in the proposed stake sale.

BPCL employees, however, can bid. They will be given the option to match the highest offer if their bid is within the 10 per cent band.

The selected bidder will have to make an open offer to public shareholders for acquiring another 26 per cent.

The open offer price (payable in Indian rupee) will be the highest of the negotiated price under the sale, weighted average price paid by the acquirer and persons acting in concert in 52 weeks preceding the public announcement for open offer, highest price paid by the acquirer for any acquisition during 26 weeks preceding the announcement or the weighted average price over 60 trading days prior to the date of announcement.

Under the guidelines of the Securities and Exchange Board of India (Sebi), the acquisition of an aggregate of 25 per cent or more shares or voting rights in a listed entity would trigger an open offer.

Unlike the Air India sale, employees would not be given any stock option in the case of BPCL. But they can bid. For that, at least 15 per cent of the employees should participate in the bidding process. They can form a consortium with companies or financiers, but such partners cannot bid separately.

The divestment will also mean transfer of management control. BPCL’s equity of 61.65 per cent in Numaligarh Refinery will be sold separately to a state-run oil and gas company, the bidding for which will be conducted in two stages.

For the BPCL sale, bids will be allowed from consortiums of maximum four players, with the lead member having at least 40 per cent holding in the partnership. Each member in a consortium must also have a minimum net worth of $1 billion. The transaction adviser for the deal is Deloitte Touche Tohmatsu India.

The investor will get access to diversified business areas of the company – including refinery, retail, lubricants, aviation, gas and liquefied petroleum gas (LPG). BPCL’s share of the country’s refining capacity is pegged at 15 per cent, while it has 25.77 per cent in the retail market, 25.67 per cent in LPG, 24.94 per cent in aviation and 22.29 per cent in lubricants.

According to the data available with the Petroleum Planning and Analysis Cell, BPCL has 15,184 fuel retail outlets and 58 ATF stations across the country. The company has investments in upstream sector too with participating interests in 25 blocks. While 13 of these are located in India, another 12 are overseas.