Hong Kong (CNN Business)Macao, one of the world’s top gambling hubs, is planning to close its casinos as the deadly coronavirus outbreak continues to surge.

The government of the semi-autonomous Chinese territory will suspend operations in gambling and other related industries for about two weeks, Macao Chief Executive Ho Iat Seng said during a press conference Tuesday.
Macao has 10 confirmed cases of the coronavirus, which has killed at least 427 people and infected more than 20,000, mainly in China.

Ho said that the decision was made after an expert review, as the ninth confirmed patient was discovered to have worked in the gambling industry. 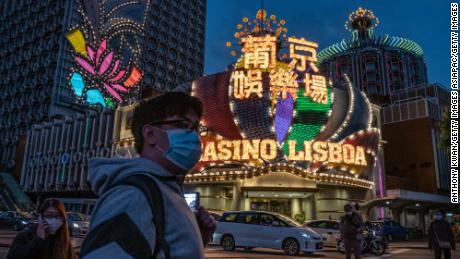 Macao officials told CNN that the date the suspension will start hasn’t yet been decided. The city’s leader planned to meet with representatives from gambling companies on Tuesday.

Casino stocks dropped in Hong Kong following the announcement. Galaxy Entertainment and Sands China, both components of the Hang Seng Index (HSI), declined by 2%.
Shares in Wynn Macau (WYNMF) and MGM China (MCHVF), which also trade in Hong Kong, fell 1.7% and 2.2%, respectively. In the United States, Wynn (WYNN) and MGM (MGM) tumbled 3% in premarket trading. Las Vegas Sands (LVS) fell 5%.
Gambling is the lifeblood of Macao, a vibrant southern Chinese city that depends on millions of visitors from mainland China. But the recent global health scare has threatened the business model at the heart of Macao’s economy.
Last year, the city received almost 40 million visitors. Now, streets and squares once teeming with tourists from mainland China are empty. Ambulances roam the city, operated by emergency workers dressed in hazardous materials suits.

According to the Macao government, January tourism figures plunged 87% compared to the previous year, even though the busiest holiday of the year — Lunar New Year — fell during that period.
— Laura He, Ivan Watson and Brad Olson contributed to this report.
Source: Read Full Article