EU leaders divided on how to protect economies after coronavirus

Europe’s economy was meant to have a decent year in 2020. Factory production in the 19-country eurozone rose strongly in January, after a tentative truce in the US-China trade war. Consumer confidence was strong. Housebuilders’ order books were full.

The stage was set for a solid, albeit unspectacular year. The European economy would see “steady and moderate growth”, predicted the European commission’s economic forecast on 13 February. It also warned of clouds on the horizon, including a new virus. Noting mounting concern about coronavirus, as well as “downside” risks, the Brussels forecast concluded the outbreak would peak in the first three months of the year, with “relatively limited global spillovers”.

That was then. One month later the global economy is heading for recession, markets have taken a hammering, investors are panicking. Across the continent, shops, restaurants and bars are shuttered, supply chains frozen, football matches cancelled, theatres, cinemas and hairdressers closed. The pan-European Stoxx 600 index had its worst-ever day on Thursday, plunging 11.5%, after a blunt message from the European Central Bank president, Christine Lagarde, that it was the job of governments – not the ECB – to protect indebted countries.

The head of the European commission, Ursula von der Leyen, described the pandemic as “a major shock” to Europe’s economies, as she promised a €37bn (£33bn) fund to handle the fallout.

Attention is turning to eurozone finance ministers, who will meet on Monday, after the ECB disappointed markets by declining to cut interest rates as part of a stimulus package announced last week.

Having fumbled the eurozone debt crisis, can EU leaders now protect their economies from the worst pandemic in more than 100 years?

Italy, the hardest-hit country in Europe, is heading for rocky times. “Italy has gone through many crises, unfortunately,” said Lorenzo Codogno, a visiting professor at the London School of Economics. “The problem is that, coming from all these crises in the past, the Italian government is weak right now and the public finances situation is even more fragile, so it’s particularly dangerous.”

He is forecasting a 3.1% slump in economic output in 2020, or even 6.5% in a worst-case scenario – “given how the situation is unfolding, [the latter] might become the baseline scenario pretty soon”. The Italian government, which has said it is ready to spend €25bn to protect its economy from the fallout, has chided other Europeans for “beggar-thy-neighbour” policies, such as Germany’s export ban on surgical masks.

Italy’s banks are in a healthier position than 2011, when they were creaking under bad loans, but things could still turn nasty. To avoid a return to the “doom loop” – where potential bank failure risks the bankruptcy of the state – Codogno is advocating support for Italy in the form of an EU precautionary credit line. 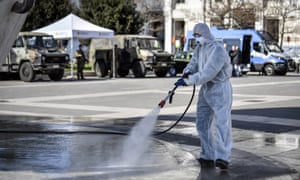 In France, the next-worst-affected European country, the government is warning of “severe” consequences for the economy. The outbreak is another blow, after a wave of strikes in 2019 chipped away at economic growth. France’s central bank has cut its growth forecast for the first quarter to 0.1%, down from a previous estimate of 0.3%, warning of a “severe but temporary” slowdown.

Germany is not as badly affected by the virus as Italy or France, but its export-led economy was the first to feel the chill of China’s slowdown. A survey for the ifo Institut last week revealed that 56% of German companies had reported “negative effects”, with a 44% slump in demand and 52% of manufacturers saying they were experiencing difficulties with supply. In response to the pressure on the economy, the chancellor, Angela Merkel, even suggested that she was ready to reverse the rule of maintaining a balanced budget – the black zero or schwarze Null – that has proved an unbreakable political orthodoxy for the government in recent years.

Speaking before the German government announced “unlimited” credit to keep companies afloat, the influential president of the ifo, Clemens Fuest, said that Berlin was “moving in the right direction”. He supports a temporary relaxation of the schwarze Null, noting that “the black zero was a very good policy in good times, but it shouldn’t stand in the way of taking decisive measures”.

The German economist thinks EU measures need to be similarly targeted and “we have not reached that point” of needing precautionary credit lines for indebted countries.

The coronavirus fallout is likely to be uneven. “The producers of toilet paper don’t have a recession at all, and the restaurants and hotels have a very deep one,” said Christian Odendahl, chief economist at the Centre for European Reform, based in Berlin. Manufacturers, he said, have more hope of a “V-shaped” recovery – that is, an economic bounce-back as rapid as the descent – because they will benefit from pent-up demand.

Odendahl observed: “If you want to buy glasses now but you can’t because of supply chain disruptions, you will do so later, whereas a restaurant or a trip you just have to cancel.” For that reason, he thinks Germany could see a more rapid rebound compared with countries more reliant on tourism, such as Spain. 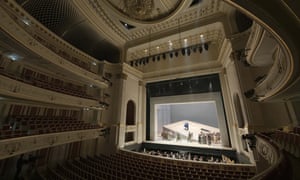 But that should not stop European policymakers from taking “bold” action, Odendahl said. All companies “need liquidity help to make sure they survive this long pause of economic activity intact”. He also wants to see a European approach to help indebted countries: “If there was a time for risk-sharing, then this would be it. This is a situation where there is no moral hazard.” Here he is referring to the debate that raged during the eurozone debt crisis, when creditor countries declined to pool risk for fear of “rewarding” debtors.

Mário Centeno, the head of the Eurogroup – made up of the finance ministers of the eurozone – said that his members would come up with “a very large policy response” to address the crisis – greater than the €27bn Lagarde suggested was needed. Centeno expects ministers to agree fiscal measures that will ensure liquidity for companies, support unemployment benefits and help reduce hours for workers.

But it is not clear whether these measures add up to the “massive” economic stimulus plan that France is looking for – a measure EU leaders failed to agree to on a telephone conference summit last week.

Pascal Canfin, a French MEP and ally of President Emmanuel Macron, has called for a “European stimulus package” to be announced by the EU leaders’ summit at the end of this month (26-27 March). Canfin, who chairs the European parliament’s environment and public health committee, argues that this package must be aligned with the European Green Deal, a plan to transform the economy to meet the demands of the climate emergency.

In addition to using flexibilities in EU budget rules, the MEP said that a European stimulus package agreed on 27 March “would be a real answer to the problem right on the scale and right on the time”. It would “make sure the green deal is alive”, with spending to promote electric vehicles and energy-efficient housing.

But some EU countries think it’s premature to discuss this kind of stimulus. The European commission’s vice-president in charge of the economy, Valdis Dombrovskis, has sounded a cautious note: “In current circumstances, I wouldn’t be talking so much about fiscal stimulus, rather about crisis response.”