Home » Business » Economist: It's going to take years for jobs to recover

Economist: It's going to take years for jobs to recover

New York (CNN Business)The US job market continues to suffer, and Thursday brought bad news. Another 885,000 people filed for first-time unemployment benefits last week — an increase from the week prior and higher than the 800,000 claims that economists were expecting.

The latest figures, which are adjusted for seasonal factors and reported by the Labor Department, are particularly grim since last week’s numbers were revised up to 862,000. And even before the revision, that week had been the highest level since mid-September.
This was the fourth time in the past five weeks that first-time claims increased from the prior week.

Meanwhile continuing claims, which track the total number of Americans seeking jobless benefits, fell to 5.5 million.
But more than 20.6 million people have now filed for some form of government unemployment benefits in the past four weeks as of November 28. That’s an increase of more than 1.6 million from a week earlier.

The report comes at a tenuous time for America’s economy.
The last round of Covid-related financial aid from Washington has run out, and Congress is trying to deliver another stimulus package to struggling consumers and businesses in the lame duck session before Joe Biden is inaugurated. 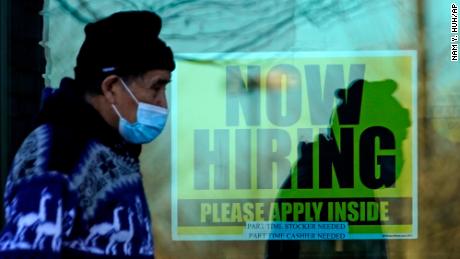 Economists and investors are excited about the prospects for a rebound in 2021 now that there is an approved coronavirus vaccine that a few have already received. But many Americans still need help now, a fact not lost on Federal Reserve chair Jerome Powell.
“Although there has been much progress in the labor market since the spring, we will not lose sight of the millions of Americans who remain out of work,” Powell said in a press conference Wednesday after the Fed once again left interest rates near zero.
Source: Read Full Article