New York (CNN Business)The coronavirus took another bite out of the US airline industry early Tuesday, as two of the nation’s largest airlines, American and Delta, announced deep cuts in their international and domestic schedules.

“We are prepared to do more as the situation evolves,” said CEO Ed Bastian.
Delta said it would make additional moves aimed at saving $3 billion, including a suspension of share repurchases, a deferral of contribution to the company’s pension plans, a cut in capital spending and a deferral of maintenance spending on aircraft it expects to park. It also said it would institute a hiring freeze and set up a way for employees to sign up for unpaid leave. And Delta said it no longer stood by its previous earnings outlook for 2020.

“Should the environment get worse, we can go deeper,” said Bastian.
The spread of the coronavirus and guidance from US health officials has caused many major companies to limit employee travel and also led to the cancellation of major public events, such as South by Southwest. Bastian said he did not anticipate trying to encourage passenger bookings through steep fare cuts. 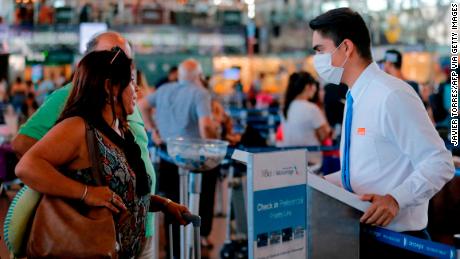 “This is clearly not an economic event. It’s a fear event, more akin to what we saw after 9/11 than in 2009,” Bastian said, referring to the fall in travel during the Great Recession.
In another sign of the hit airlines are taking, Southwest Airlines CEO Gary Kelly announced in an email to employees Monday that he would take a 10% paycut, a spokesperson for the airline confirmed. And Southwest is “seriously considering reductions to our scheduled flying in the short term,” according to the spokesperson. But it has yet to announce details of the schedule cut.
The only good news for airlines from the crisis has been a sharp drop in the cost of jet fuel, the second largest expense at most airlines. American said it will save $3 billion in cost savings this year compared to its earlier guidance, while Delta said it expects to save $2 billion.

The cuts follow similar reductions in capacity announced last week at United Airlines (UAL) and JetBlue Airways (JBLU). Other cuts could be announced today as most of the nation’s major airlines are due to speak with investors at a conference Tuesday sponsored by JPMorgan Chase.
Shares of American jumped 6% in premarket trading on the news while Delta shares rose 3%. Other airline stocks were also higher.
Source: Read Full Article