The coronavirus pandemic, for many, signaled a move away from major cities.

But for Michael Johnston, it was the perfect time to finally take a gamble on one — and finally relocate to Las Vegas.

A financial advisor in his mid-50s, Johnston and his wife, Angela, had raised five kids in Laguna Beach, California. They called the Orange County enclave home for 25 years. But for the last three, the couple had envisioned forging a fresh start about 15 miles from Sin City’s iconic Strip.

Enchanted by southern Nevada’s balmy weather, state parks, and buzzy entertainment outlets, they wanted to enjoy the spoils of Vegas during their retirement years. So a few years ago, they purchased a plot of land in MacDonald Highlands — whose website labels it “the most exclusive luxury community” in Henderson, Nevada, a metropolitan area just south of downtown Vegas — in preparation.

But the coronavirus pandemic untethered Johnson from his office, which he had previously thought was essential. And by now, he said, all five children had left the nest. Air travel still makes the couple uneasy, but Vegas provides a “fun” domestic base. Plus, it means shorter drives to their ski house in Park City, Utah, their aging parents in Alabama, and their kids scattered in college towns across the US. 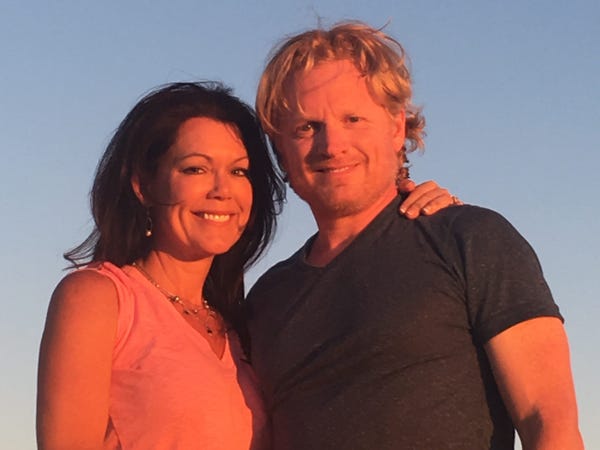 When the pair started house-hunting, though, they faced competition from like-minded Californians. “We naively went over there thinking we’d be able to find a place to move in,” Johnston joked.

If the Vegas housing market had gone the way of casinos and tourism — and declined the way analysts predicted — the Johnstons would have gotten a deal. The local economy did, in fact, suffer, and is still flailing. But property prices shot up over the course of the pandemic for two reasons. First, protective federal legislation that kept people in their homes even if they couldn’t pay, which limited the number of houses on the market for sale. Second, a influx of out-of-state buyers increased demand for the properties that were available.

Compared to other metropolises like New York and San Francisco, the Las Vegas real-estate market held up, defying projections that it would crumble amid the pandemic. Here’s the story of how it not only survived, but thrived.

In the spring of 2020, analysts expected the Las Vegas housing market to plummet given the local economy’s dependency on two major industries: entertainment and tourism — both of which have been devastated by the pandemic.

The second part of their prediction came true. Just 19 million people visited Las Vegas in 2020, down 55% from 2019, according to the Las Vegas Convention and Visitors Authority. Casinos were forced to slash expenses and jobs. 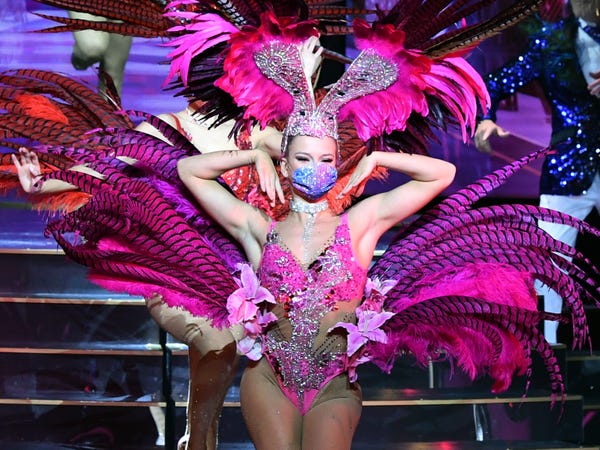 Last month, a report by local station Fox 5 KVVU-TV found that the Las Vegas job market has been one of the hardest-hit among large metropolitan areas.

The study pointed to the Consumer Electronics Show, known as CES, which takes place each January and generated more than $291 million for the city’s economy in 2020. The 2021 show was held virtually: Hotel rooms that were snapped up for $400 a night in 2020 were advertising rates from $25 to $45 last month — a major blow that that was expected to ripple through the housing market, too.

In July, real-estate data firm CoreLogic predicted that Las Vegas home prices would drop 20.1% by May 2021. It cited rising unemployment from the declining casino, hotel, and events industries that would suppress local demand by squeezing the bank accounts of would-be homebuyers.

And while unemployment in Las Vegas did increase drastically — it was at 10.3% in December 2020, up 3.5% from a year prior and higher than the national rate of 6.7% —  home values in the area haven’t declined.

In January, home prices in Las Vegas jumped 7.9% compared to the same time a year ago.

It’s important to note, CoreLogic’s senior economist Dr. Frank Nothaft explained to Insider, that home prices aren’t rising as fast in Las Vegas as they are in other areas across the country because of its weak local economy. But they are, nonetheless, rising, thanks in part to a healthy influx of out-of-state homebuyers.

Analysts who predicted increased unemployment would lead to lower housing prices used this logic: When a homeowner can’t pay a monthly mortgage payment, the home becomes at risk of foreclosure — a legal process that allows the mortgage lender to sell it and use the proceeds to pay the outstanding debt. When many foreclosed properties hit the market at the same time, it increases supply in a given area, which tends to lower prices.

However, in March 2020, Congress passed the Coronavirus Aid, Relief, and Economic Security (CARES) Act, which among other supportive initiatives protected borrowers with federally backed loans by offering 180 days of mortgage relief that could be extended to an additional 180 days, according to the Conference of State Bank Supervisors, a national regulatory organization.

This provision has kept foreclosures low for the last year — and President Biden extended its protections through June 30, 2021 and, for some, for six more months beyond that. 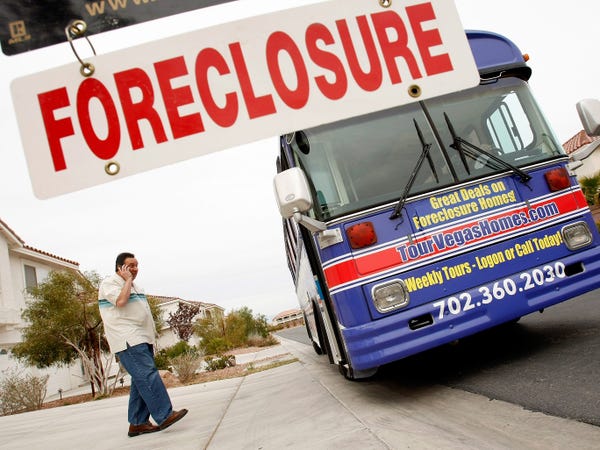 In April 2020, just a month into the pandemic, financial technology firm Black Knight found that delinquent mortgages were up 6.2% in Las Vegas compared to March. However, with the CARES Act in place, those unable to pay have been able to avoid foreclosure proceedings that afflicted the city during the Great Recession. That chain of events would have increased for-sale inventory and pushed down home values.

Las Vegas is a “somewhat competitive” market right now with a median home price of $323,400, according to Seattle-based brokerage Redfin. It’s not quite the “very competitive” scene found in Austin, Texas, but the situation is far better than in New York, where prices are expected to fall for the rest of the year.

A typical Las Vegas home stays on the market for around 40 days, but it isn’t uncommon for some to be sold in just 12. Compare that velocity to March 2019, when a report by the University of Nevada Las Vegas found that homes spent an average of 83 days on the market in the metropolitan area.

The main driver for the bum rush for area homes is an influx of out-of-state buyers who push up demand as the number of properties for sale remains steady or declines.

New residents are arriving from the East Coast, too, added Nora Aguirre, a Century 21 agent with 16 years of Vegas experience, with New York, Washington DC, and Florida serving as the main feeder markets. 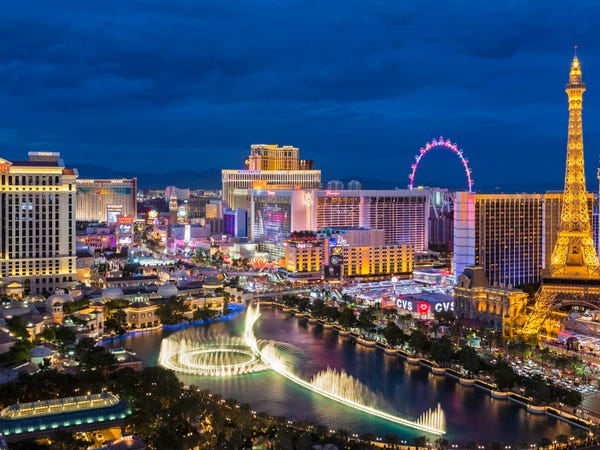 “The state’s average effective property tax rate is just 0.69%, which is below the national average of just over 1%,” said Routh Silberman, adding that Nevada homeowners are protected from sudden property-tax jumps by a state law that limits annual raises to 3% for homeowners.

“Even if home values increase by 10%, property taxes will increase by no more than 3%,” said Routh Silberman.

Aguirre also said that transplants are “looking for that tax break,” adding that many new residents — like the Johnstons — might even choose to keep their California property, but make the move to Nevada for their primary residence.

In late 2020, the Nevada Independent’s Sean Tyler called the state “the new California,” adding that the “so-called ‘California exodus’ has made Nevada the fastest-growing state in America for the second year in a row, and according to current census data, ex-Californians now represent 20 percent of Nevada’s population, with nearly 100,000 Californians emigrating to Las Vegas in 2019 alone.”

Tyler said he left LA for Sin City himself because of “its boomtown allure, low taxes and cheap housing.”

“I was paying $1,200 for an outdated one-bedroom apartment in poverty-stricken South Los Angeles, where police sirens wailed constantly and the onsite laundry machines were only good for eating quarters,” he wrote. “And now, for the same price, I live in a newly built three-bedroom townhouse in a stylish middle-class community just south of downtown Las Vegas. It’s like living in a resort. I have a backyard and a pool, plus my own washer/dryer and a powerful central air conditioning unit that makes the idea of relocating to one of earth’s hottest deserts seem like a very wise decision.”

In addition to the CARES Act keeping Las Vegans in their homes who might not otherwise afford it, supply is also limited because other would-be sellers might be afraid to list their properties, fearing they might not be able to afford a new house after selling the old one due to higher prices.

As a result, Routh Silberman said, local inventory has hit an all-time low. The imbalance between paltry supply and outsize demand has led to the home-price increases that analysts didn’t initially predict — and heated competition among buyers.

“Many experts had predicted it would crash as it did during the Great Recession,” Routh Silberman said. “On the contrary, the Las Vegas real-estate market, especially the luxury sector, is in the midst of a boom. Even during these tough times, Las Vegas properties are selling at record prices.”

Modern custom homes and land lots with views of the Strip are the most sought-after, she added. “Even the most expensive custom homes in Vegas are found to be a bargain for these out-of-state buyers,” said Routh Silberman, who handled more than $99 million in Nevada real-estate deals in 2020, according to Real Trends. .

The neighborhoods seeing a spike in transactions are Henderson’s MacDonald Highlands, where the Johnstons bought, and two neighborhoods in the nearby master-planned community of Summerlin in the Las Vegas Valley: The Summit and The Ridges.

The future of the housing market looks as bright as the dazzling lights of the Strip.

Routh Silberman said she expects demand for Las Vegas homes hold steady through 2021 and into 2022. Along with additional transplants, she added, new businesses moving to Nevada will bring additional jobs whose workers will also seek. housing.