On Monday, California Governor Gavin Newsom announced that the number of COVID-19 cases have doubled in the past week, with 10,968 new cases on Monday. He said that is the fastest rate of rise the state has seen during the pandemic. He said that there has been a 48% increase in hospital beds occupied by coronavirus patients in the past two weeks alone. The number of ICU patients with COVI-19 have risen 38% over the same period. “We are now seeing community spread throughout the state of California.

He revealed that the acceleration of counties moving back through the state’s tiered reopening system that was foreshadowed by California’s HHS secretary, Dr, Mark Ghaly, last week was being implemented. “This is no longer a marathon,” said Newsom, “this is a sprint.”

One change was a movement from a recommendation not to gather with members of more that 2-3 other households to a much more strict “do not gather indoors with other households.” 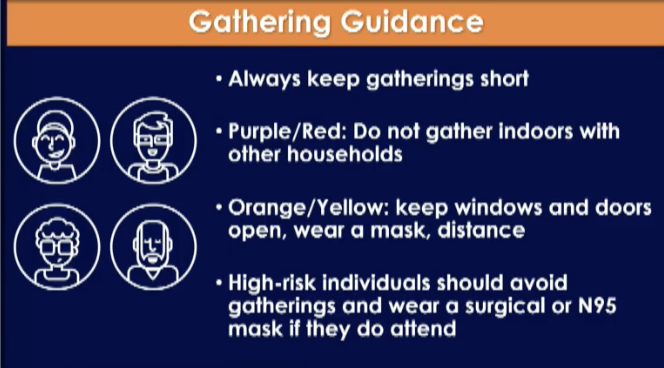 When pushed on what those “emergency brakes” might be, the HHS director focused mostly on increasingly rapid movement for counties back into more a restrictive status in the state’s tiered reopening blueprint.

“Now may be the time when counties move back after only 1 week [instead of waiting two],” proposed Ghaly. “To date, we’ve had counties move back only one tier at a time,” he continued before imagining that counties might jump back multiple tiers at once.

As a result, the state now has 41 of its 58 counties in the most restrictive tier, according to Ghaly on Monday.

The adjacent map shows the current position of California’s counties. 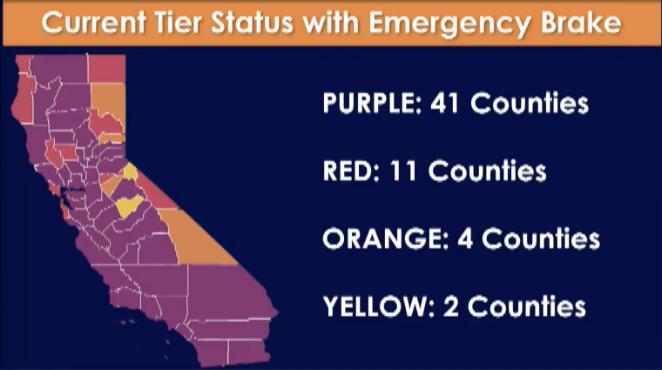 On Monday, Newsom said another “emergency break” measure was that businesses would only have 24 hours instead of 72 hours to comply with the new restrictions.

The governor also said the state was implementing previous plans to surge medical resources in anticipation of a surge in hospitalizations. The first area of action would be hard-hit Imperial County, he said.