Bumpy ride ahead for electric two-wheelers

The impact for all electric two-wheelers, which are imported mostly from China, is that it will lead to price escalation that will be passed onto customers. 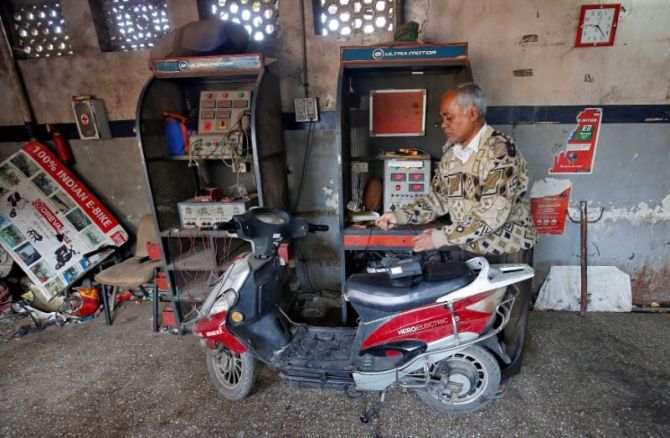 For Okinawa Autotech, a fledgling maker of electric two-wheelers, that started making products a couple of years ago, sales were humming along steadily with numbers of 45,000 units a year and projections of reaching 100,000 in sales by this year.

Suddenly, the squeeze of components and parts from China started after the coronavirus outbreak along with stricter norms enforced under FAME 2 by the Centre.

Now, Jeetendra Sharma, the company’s managing director (MD), claims that other than battery, everything is locally made and admits that those projections stand corrected.

Okinawa, which makes a range of more than half a dozen products that start as low as Rs 60,000, has production capacity at 90,000 units per annum at its new plant in Alwar, Rajasthan.

It has been among the more aggressive players in the electric two-wheeler space with different variants across both low-speed and high-speed vehicles.

Sharma’s big plan is to launch an electric motorcycle with a top speed of 120 km.

However, that has also been postponed till Diwali as opposed to the June-July time-frame set earlier.

Under the government’s national mission on electrification of vehicles (FAME 2), the industry has seen sales of 280,000 units that are dominated by two-wheelers and three-wheelers but there is every indication that a contraction has begun and will be there for a while.

He adds that many small companies have, over the last eight years, tried to make a go of such products but did not succeed.

He says, “In the current market, the entire two-wheeler projections are being redone.

“The impact for all electric two-wheelers, which are imported mostly from China, is that it will lead to price escalation that will be passed onto customers.”

Sullaja Firodia Motwani, a two-wheeler veteran and founder of Kinetic Green Energy & Power Solutions, which makes green three-wheelers and small vehicles, says that speed is an integral part of performance for any two-wheeler.

“When you make bikes or scooters that are slower than 60 km per hour, it becomes a challenge to go uphill, overtake on long roads, carry two people and so on,” she says.

“In addition, making bikes with bigger electric engines that perform well without vibrations has not been easy in the past for indiginous players, although that is slowly changing,” adds Motwani.

Any long-term slowdown in two-wheeler sales will not bode well for the national plan to electrify India’s vehicles, which are vastly dominated by two and three-wheelers, she says.

She goes on to say that in five to 10 years, a large chunk of two-wheelers – with ICE motors – will be replaced by EVs. China’s EV-related sales is less than 50 per cent when usually during post the Chinese New year, it’s at its highest.

So, there will be a possible 10 per cent to 12 per cent price hike for the electric two-wheeler industry.

“Even a price change of 5 per cent can make a big difference to sales because customers at that segment are highly price sensitive,” says Mehra.

Ather Energy, which makes electric scooters and runs a 300-man R&D centre out of Bengaluru, has two scooters – the Ather 450 and the pricier Ather 450 X – launched in January and will start production in July.

What are Ather’s investors looking at, given the market changes?

“When something like what is happening right now (coronavirus outbreak) happens, we start to focus on products, customers and our existing technology.

“We won’t introduce new products for at least two years,” he says.

He adds that in the next five years, the company expects at least 25 per cent of the scooters to go electric.