Elkin controlled most of the first two rounds, keeping Shields pinned on her back.

But in the third and final round, Shields reversed the story, got on top of Elkin and unloaded punches until the referee called the fight at 1:44 of the third round.

“I feel like I’ve been dreaming,’’ Shields said, beaming during a post-fight interview. “This is crazy.’’

Fighting in the 155-pound women’s lightweight division, Shields (1-0 MMA) showed inexperience during takedowns but displayed power with punches. The punches came in a flurry in the third round when Shields got on top of Elkin and let her right hand go to work.

“My right hand has never failed me,'' she said.

IT’S ALL OVER!!! CLARESSA SHIELDS IS HERE TO STAY!#2021PFL4pic.twitter.com/6zYPYwCGQY

After the fight, Shields revealed instructions her coaches shouted in the final moments.

Shields continued to pound away, and it was too much for Elkin (3-7) as the referee stopped the featured bout in the Professional Fighters League bout at the Ocean Casino Resort in Atlantic City, N.J.

Shields, 26, had been training in MMA for the past six months but took breaks to continue boxing. 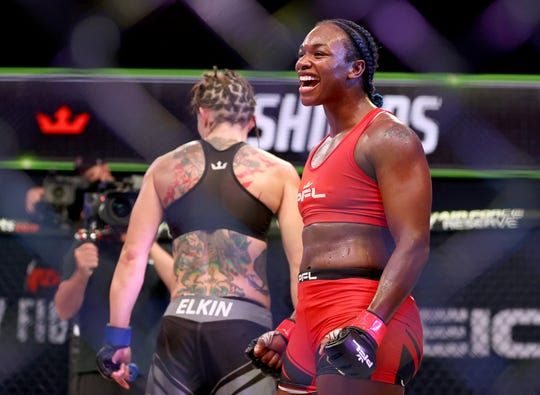