New York (CNN Business)Boeing delivered 26 jets in January, logging one of its best months since the grounding of the 737 Max in March 2019.

The 737 Max helped boost those figures, with 21 delivered in the month. The company has been working through a backlog of more than 400 737 Max jets that were built during the its 20-month grounding but couldn’t be delivered.
After two crashes that killed 346 people, the 737 Max was grounded in March 2019. The US Federal Aviation Administration didn’t lift the restrictions until late November 2020.

Deliveries are crucial for Boeing (BA), which posted a record loss in 2020. The company gets most of its money from plane sales at the time of delivery. They’re also important for airlines, despite the still-weak demand for flying, as the new planes are more fuel-efficient than the ones they’ll be replacing.
Last year, Boeing’s deliveries plunged 59%, hurt by the twin crises of the 737 Max grounding and the pandemic-fueled plunge in demand for air travel. Airlines, which as a group posted record losses, put deliveries on hold in a desperate effort to preserve cash.

Among Boeing’s 26 deliveries in January are two jets to Alaska Airlines (ALK), which became the fourth US airline with the plane in its fleet. Alaska Airlines will start flying the jet for the first time on March 1, and its executives say it will produce significant savings for the airline.
“We’ve eagerly waited for this day. It was a proud moment to board our newest 737 aircraft and fly it home,” said Alaska Airlines President Ben Minicucci last month when the jets were delivered. Minicucci and other Alaska executives took the first short flight from Boeing’s Washington state factory to its hub at the Sea-Tac airport.
“This plane is a significant part of our future. We believe in it. We believe in Boeing,” Minicucci said.
Alaska expects to take delivery of 13 of the planes this year in total, producing fuel and maintenance savings of about $10 million, and it plans to take delivery of 68 of the planes over the next four years. The 737 Max also has 28 more seats than the Airbus jets it will replace.
American Airlines (AAL) became the first US airline to start flying the plane post-grounding late last year. It says so far booking information shows no reluctance of passengers to fly on the jets. But critics of Boeing and the plane, including some of the families of those killed in the crashes, argue that the fixes have not made the plane safe and advised people not to fly it.
Not all of Boeing’s customers are able to take delivery, as aviation regulators in China and elsewhere have yet to approve the plane to carry passengers. 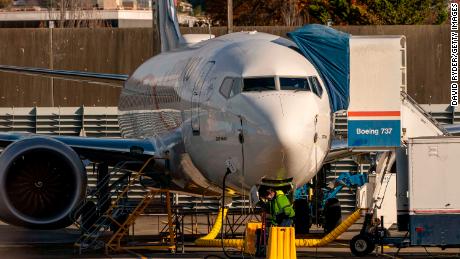 But it has yet to resume deliveries of the 787 Dreamliner, which has had deliveries paused by its own quality control issues. It doesn’t expect to resume those deliveries until next month at the earliest. That problem makes the deliveries of 737 Max jets that much more important.
Meanwhile, Boeing had only four new orders in January for the 747 freighter, ordered by Atlas Air. But it had three orders for that freighter canceled in the same month, along with two 737 Max orders and one 787 Dreamliner order canceled.
Source: Read Full Article