Marijuana legalization is spreading around the US.

Since 2012, 15 states and Washington, DC, have legalized marijuana for adults over the age of 21. And 36 states have legalized medical marijuana — meaning that a majority of Americans now have some form of access to marijuana, whether medically or recreationally.

Four more states — New Jersey, Arizona, Montana, and South Dakota — voted to legalize recreational cannabis in November. On top of that, voters in Mississippi backed the creation of a medical cannabis program.

Though Canada legalized marijuana federally in 2018, the US has not followed suit, forcing states to chart their own courses. As it stands, marijuana is still considered an illegal Schedule I drug by the US federal government.

Joe Biden’s victory in the presidential election and the Democratic party’s control of Congress, could give marijuana a bigger boost in the US. The House in December voted on a bill to legalize marijuana and expunge the records of those convicted under previous laws, the Marijuana Opportunity Reinvestment and Expungement (MORE) Act, though the legislation was considered a nonstarter when Republicans controlled the Senate.

Cowen analyst Vivien Azer said in a January 6 note that with a Democratic-controlled government, cannabis-related legislation — like the STATES Act or MORE Act — has a better chance of passing through Congress, creating big opportunities for the US industry.

“[W]e expect Congress will give cannabis companies access to commercial banking and insurance,” Azer wrote. “We also see medical cannabis being protected. Capital markets access is largely dependent upon enactment of either the STATES Act or the MORE Act.”

Biden has said he would support federal decriminalization of the drug. Vice-president-elect Kamala Harris sponsored a previous version of the MORE Act in the Senate. And, Senate Majority Leader Chuck Schumer has said that marijuana reform would be a priority for the Senate this year.

Despite the political back-and-forth, most Americans want legal marijuana, according to recent polls. Sixty-seven percent of Americans polled by Pew Research said marijuana should be legal, with only 32% in opposition.

All the states where marijuana is legal:

This article was first published in January 2018 and has been updated with new information about where cannabis is legal and the results from Georgia’s runoff elections. Melia Russell contributed to an earlier version of this report. 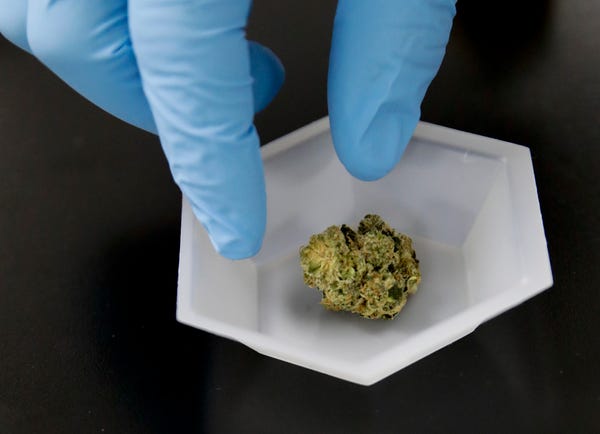 Adults 21 and over can light up in Alaska. In 2015, the northernmost US state made it legal for residents to use, possess, and transport up to an ounce of marijuana — roughly a sandwich bag full — for recreational use. The first pot shop opened for business in 2016.

Alaska has pounced on the opportunity to make its recreational-pot shops a destination for tourists. More than 2 million people visit Alaska annually and spend $2 billion. 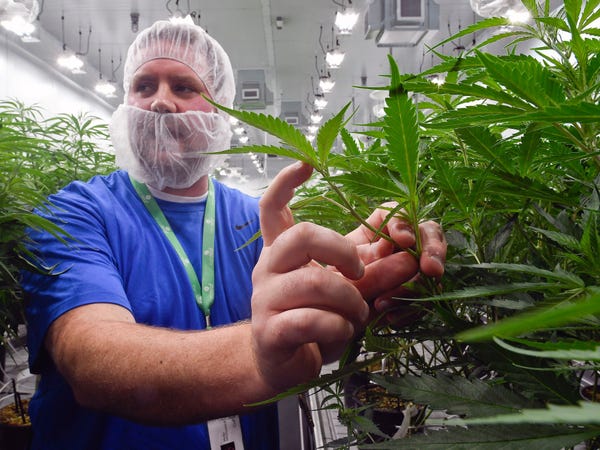 Arizona in 2020 voted to legalize cannabis for all adults over the age of 21.

The measure had support from almost 60% of Arizona voters, according to preliminary results from Decision Desk HQ.

The ballot measure was backed by a number of cannabis giants, including Curaleaf, Cresco, and Harvest Enterprises.

The Arizona Department of Health Services is required to lay out adult-use cannabis regulations by April 5, 2021. 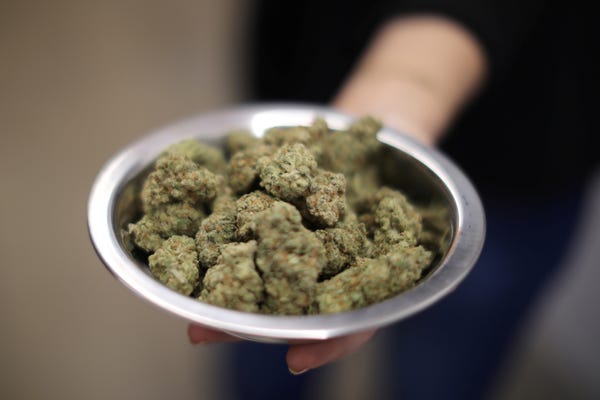 The law also permits adults 21 and over to buy up to 8 grams of marijuana concentrates, which are found in edibles, and grow no more than six marijuana plants per household. 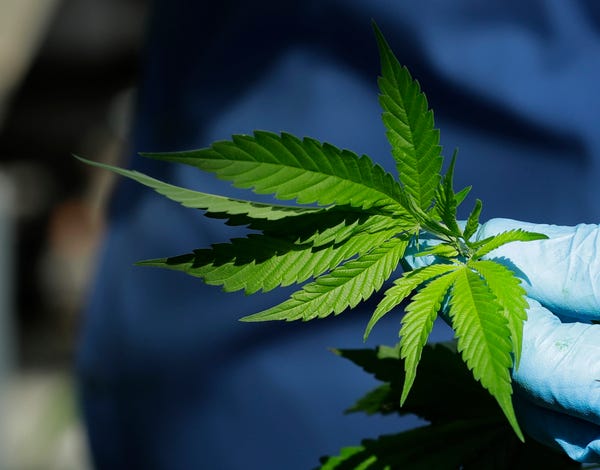 In Colorado, there are more marijuana dispensaries than Starbucks and McDonald’s combined. The state joined Washington in becoming the first two states to fully legalize the drug in 2012.

Residents and tourists over the age of 21 can buy up to 1 ounce of marijuana or 8 grams of concentrates. Some Colorado counties and cities have passed more restrictive laws. 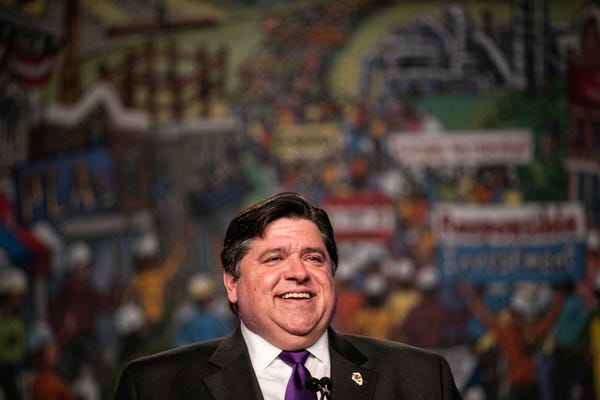 Illinois lawmakers in June 2019 passed a bill that legalized the possession and commercial sale of marijuana in the state starting on January 1.

Gov. J.B. Pritzker, who made marijuana legalization a core component of his campaign for the governor’s office, signed the bill into law.

For its part, Illinois is the first state to legalize marijuana sales through a state legislature, rather than a ballot initiative. 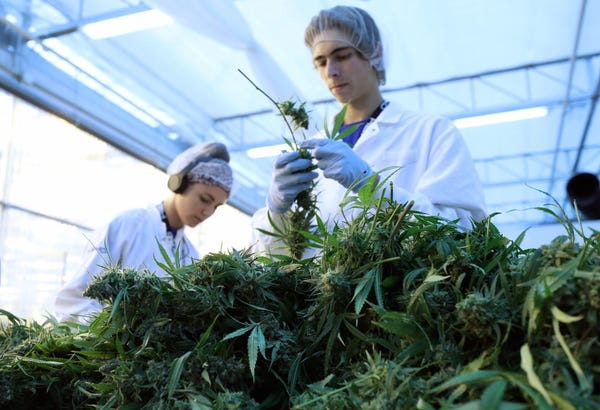 A ballot initiative in 2016 gave Maine residents the right to possess up to 2.5 ounces of marijuana, more than double the limit in most other states.

Recreational-marijuana dispensaries are set to open in Maine in October. 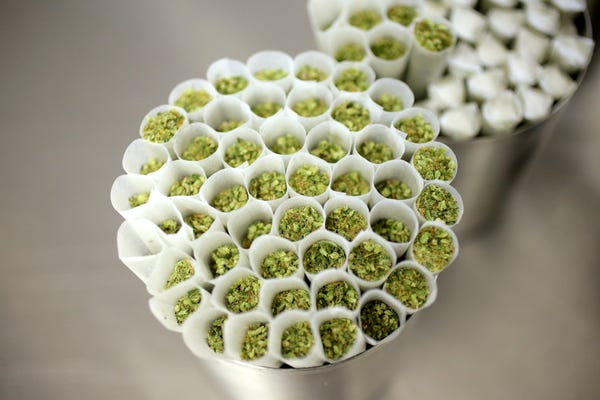 Massachusetts was the first state on the East Coast to legalize marijuana after voters approved the measure in 2016.

Marijuana dispensaries opened their doors to consumers in November 2018. Adults over the age of 21 can purchase up to 1 ounce of marijuana but cannot consume it in public. 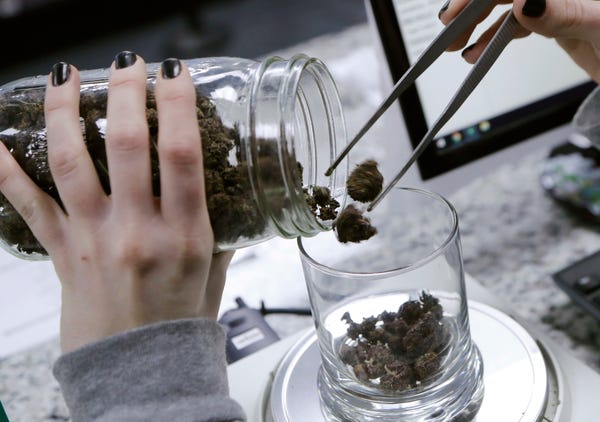 Voters in Michigan passed Proposition 1 in 2018, making it the first state in the Midwest to legalize the possession and sale of marijuana for adults over the age of 21. Adults can possess up to 2.5 ounces of marijuana, and residents can grow up to 12 plants at home.

The law is more permissive than other states with legal marijuana: Most allow residents to possess only up to 1 ounce at a time. 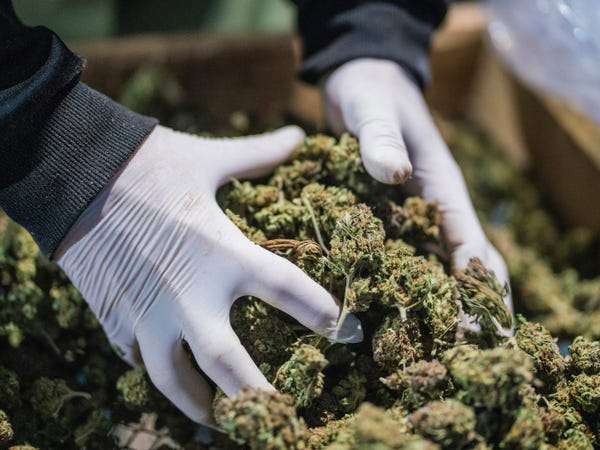 Montana in 2020 voted to legalize recreational marijuana for adults 21 and over.

Montana residents will officially be allowed to use marijuana as of January 1, 2021. A year later, the state would begin to open up applications for dispensaries. 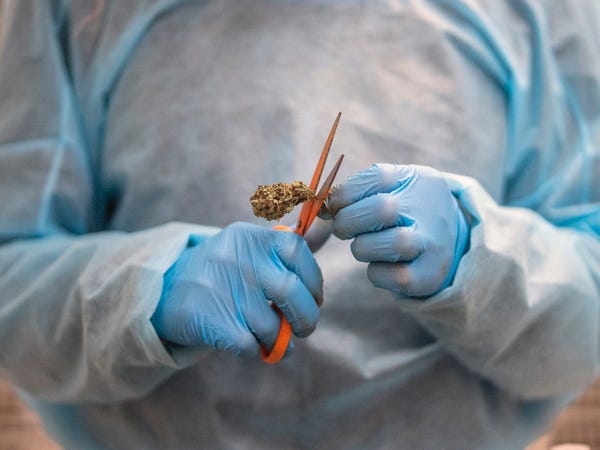 New Jersey in 2020 voted to legalize recreational marijuana for adults 21 and older, opening a market that could near $1 billion given New Jersey’s proximity to New York City and Philadelphia.

In February, Gov. Phil Murphy signed the legalization legislation, after months of back-and-forth arguments about criminal penalties for minors possessing marijuana and the proper way to set up a licensing framework for cannabis sales in the state, among other details. Sales of cannabis for adult use could start in the second half of this year, analysts at Cowen said. 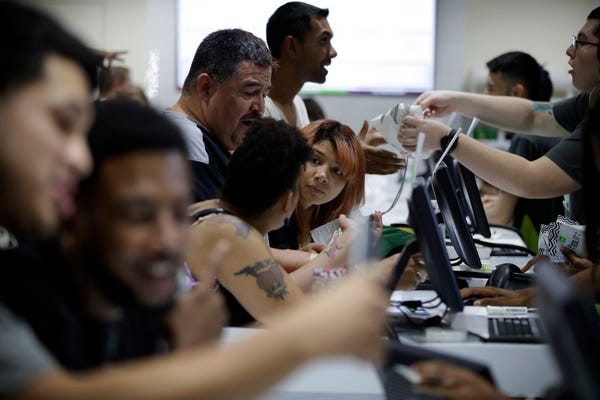 Residents and tourists who are 21 and over can buy 1 ounce of marijuana or one-eighth of an ounce of edibles or concentrates in Nevada. Less than two weeks after sales of recreational weed began on July 1, 2017, many stores ran out of marijuana to sell.

There’s bad news if you want to grow your own bud, though. Nevada residents must live 25 miles outside the nearest dispensary to be eligible for a grower’s license. 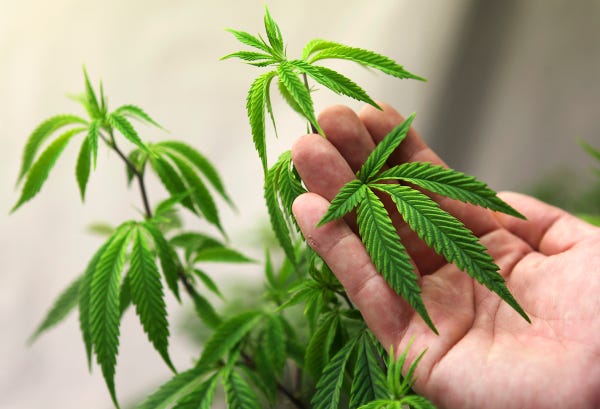 Oregon legalized marijuana in 2015, and sales in the state started October 1 of that year. 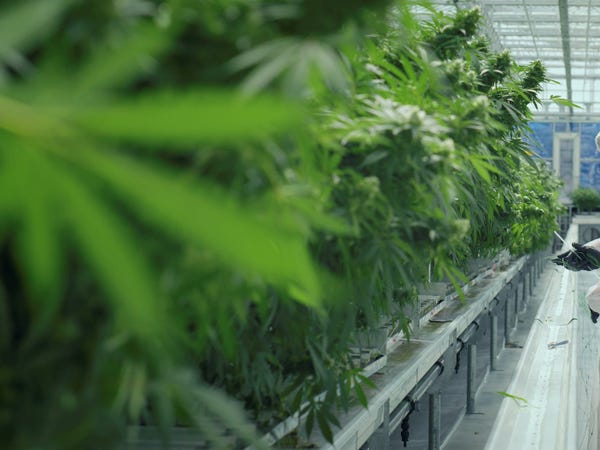 South Dakota in 2020 voted to legalize both medical and recreational cannabis, the first time a state has voted in favor of both at the same time.

State lawmakers have until April 2o22 to create rules around cannabis, including regulations around dispensaries. 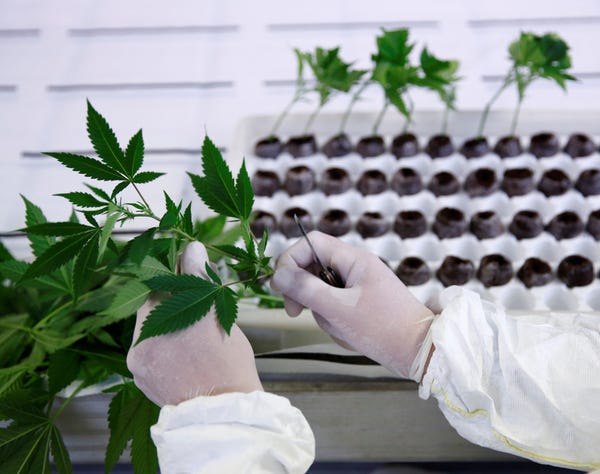 Vermont became the first state to legalize marijuana through the legislature, rather than a ballot initiative, when Republic Gov. Phil Scott signed a bill into law in January 2018.

Adults in the Green Mountain State can carry up to 1 ounce of marijuana and grow no more than two plants for recreational use. The law went into effect in July 2018. But it is limited in scope. It doesn’t establish a legal market for the production and sale of the drug, though the Vermont Legislature is working on adopting rules to create a recreational market. 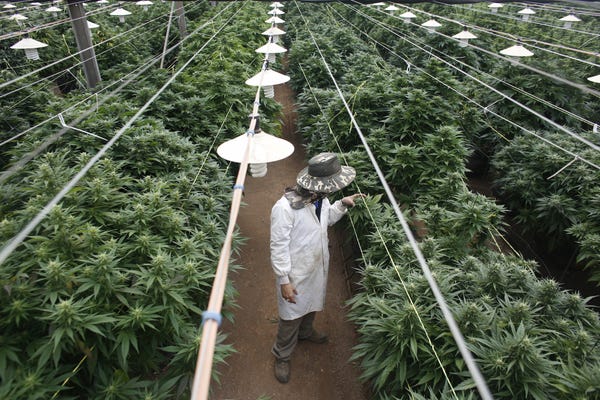 Marijuana was legalized for recreational use in Washington in 2012.

The state allows people to carry up to 1 ounce of marijuana, but they must use the drug for medicinal purposes to be eligible for a grower’s license. 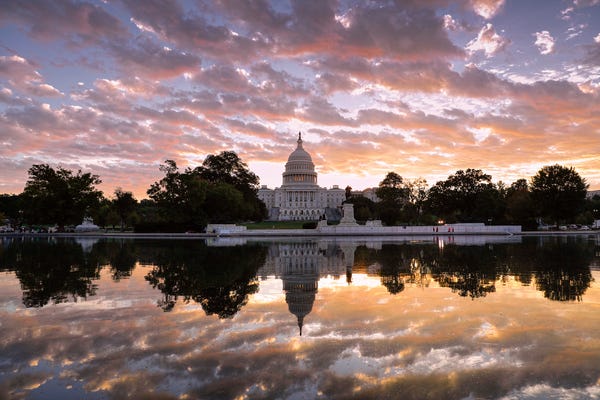 Residents in the nation’s capital voted overwhelmingly to legalize marijuana for adult use in November 2014.

The bill took effect in 2015, allowing people to possess 2 ounces or less of marijuana and “gift” up to an ounce, if neither money nor goods or services are exchanged.