New York (CNN Business)The seats are full on most planes, but in some cases, the fuel tanks are not.

At several western US airports, there’s not enough jet fuel to meet the increased demand for leisure travel. That could end up causing some flights to be canceled or force airlines to make extra stops to fuel up on longer routes.
Part of the problem is the shortage of tank truck drivers needed to deliver fuel. An estimated 20% of tankers nationwide are parked due to a lack of qualified drivers, according to an industry trade group. That shortage has already been affecting gas stations.

But airlines and airports are also struggling to get the fuel they need because pipelines shifted away from carrying jet fuel when air travel ground to a near halt last year. Now jet fuel isn’t getting the pipeline space it needs to keep up with the recent surge in air travel.

“The Federal Energy Regulatory Commission, the pipelines, and the airlines need to work together to allow space on the pipelines to ship the needed jet fuel to the airports,” said a statement from Delta Air Lines (DAL).

The problem is most pronounced in a series of western airports that are popular vacation destinations, including some in Idaho, Montana, Nevada, Utah and Wyoming. Airlines for America, an airline industry trade group known as A4A, said flights in and out of Montana are up 25% above pre-pandemic levels. Adding to the fuel shortages for airlines is the fact that some supply in that region is being re-directed to fuel planes fighting wildfires. 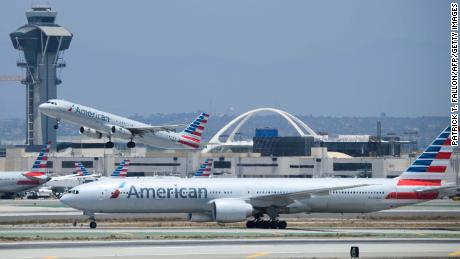 The number of daily US flights overall is still lower than before the pandemic because business travel and international travel remains at a fraction of what it used to be. But leisure travel has matched or exceeded pre-pandemic levels on many routes, according to recent earnings reports from the airlines. So airports that serve mostly domestic vacationers — such as those in western states — are busier they used to be. And getting the fuel they need for flights departing those destinations is a problem.
Some aircraft are flying to those locations carrying more fuel than they normally would so that they won’t need as much when they refuel before departing, A4A said.
American Airlines (AAL), which had to cancel some flights earlier this summer because of employee shortages at some suppliers, said planned fuel stops on some routes will be added, when necessary, if a departure airport’s fuel supply is limited.
“American is currently experiencing minimal operational impact due to fuel supply issues. Our team continues to work around the clock to monitor the situation and minimize the impact on our customers,” the airline said.
The carriers are also seeing significantly higher fuel costs than they did a year ago, when a crash in oil prices overall and limited demand for jet fuel sent prices plunging.
But it’s more the strong demand for air travel, rather than increased costs, that is lifting air fares. Supply and demand dictate airfare — airlines can’t always raise fares to cover costs. If they could, they would not have all lost billions of dollars over the last year and a half.
But the pent-up demand for leisure travel, coupled with the still limited supply of seats, increased airfares by about 25% in June compared to a year earlier, according to the consumer price index, the government’s main inflation reading. But those June fare levels are still below where they were in June of 2019 and earlier this decade. The recent big percentage increase is a result of the 27% plunge in fares a year ago.

Over the weekend, Nevada officials warned of possible fuel shortages at Reno-Tahoe International Airport. Nevada Gov. Steve Sisolak, Senators Catherine Cortez Masto and Jacky Rosen and Rep. Mark Amodei said in a statement they were focused on ensuring “resources to combat western wildfires are not impacted and that there is as little disruption as possible” for travelers.
Delta Air Lines told CNN on Tuesday it is experiencing “no current operational impact” in Reno, citing “extraordinary measures” to maintain supplies.
Source: Read Full Article