Home » Business » A hundred years on, will there be another Great Depression?

A hundred years on, will there be another Great Depression?

Such was the scale of the global market crash last week in the wake of the coronavirus outbreak, the spectre of the 1929 Wall Street rout and the ensuing Great Depression of the 1930s has been raised. Comparisons no longer seem fanciful.

The failure of the US and the UK to swing into action with a wide range of mitigation measures – despite the lessons of Italy’s slow response to the spread of Covid-19 – has heightened concerns that a sustained, epochal downturn lies in wait.

And a depression would mean an almost exact repeat of the same period one hundred years ago, when a deeply divided society and soaring stock markets during the 1920s gave way to a tortuously slow return to economic health during the 1930s in the wake of the 1929 stock market crash.

In the same way, the third decade of the 21st century could add another 10 years to the depression that followed the 2008 financial crash.

It took Franklin D Roosevelt’s huge injection of government funds under the banner of a New Deal to bring the US economy back to growth from 1933. For three years, the economy expanded until the US central bank intervened in 1937, repeating its mistake of only a few years before to increase interest rates and trigger another recession.

On 5 March, analysts at Citigroup wrote that the signs were looking grim. “The V-shape recovery theory has been significantly challenged, as investors correctly entertain the idea of a far more protracted recovery.”

Panicked by a lack of information about the spread of the virus and the stumbling indecision of many governments, stock markets plummeted for a fourth week to fresh lows.

In the US, the S&P 500 index of top US companies’ shares tumbled back to a level not seen since before Donald Trump gained the presidency. By the middle of last week, the other bellwether of US investor sentiment, the Dow Jones industrial average, was down 30% from its peak.

Making matters worse, Trump refused to abandon a trade war with Beijing that has kept import tariffs on billions of dollars worth of Chinese goods. With much of China and US manufacturing suffering a collapse in output, it seemed the perfect time for Washington to put aside a battle that had already slowed a global recovery in 2017 to a crawl in 2019.

Across Wall Street predictions of a V-shaped recovery – one that means that by the end of the year a surge in economic activity through the autumn has eradicated most of the lost output in the spring and summer – were ditched in favour of an L-shaped recovery of low growth into the middle distance.

“It is absolutely clear to every single investor,” the Citigroup analysts went on, “that the 2019 growth consensus is not going to materialise.”

A survey of leading academic economic experts across Europe found that a majority believe a major recession is a likely consequence of the coronavirus pandemic, whatever the death toll. 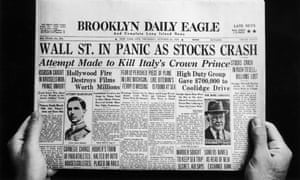 One of the main reasons for their gloomy outlook, and for many respondents to say they believed a long depression would follow the recession, was their eye-rolling assessment of Europe’s finance ministries and how effective they can be in a crisis. Two-thirds told researchers at Chicago University that it is “highly doubtful” finance ministries would respond effectively to the potential damage from Covid-19.

On Friday, Rishi Sunak set out extra measures to protect business from going bust and households from dramatic falls in income. It was the chancellor’s third attempt to allay fears that the UK would enter a recession from which it could take years to exit.

Widely seen as a way to match the income guarantee schemes implemented by the Scandinavian countries and Austria, Sunak’s plan followed warnings from the TUC and business groups that his first two efforts had fallen short, leaving hundreds of businesses to lay off workers or go bust.

There are still economic forecasters who predict a speedy return to health and a V-shaped recovery.

In recent days, Oxford Economics has predicted a deeper recession for the UK than it estimated even a week ago, with a central forecast showing zero growth at the end of the year downgraded to a 1.4% decline.

Meanwhile, the global economy gets a downgrade from 2.5% to zero growth for 2020, “which would mark the second-weakest year for the global economy in almost 50 years of comparable data, with only 2009, in the depths of the global financial crisis, being worse”, it said.

But the consultancy still expects a strong bounce-back in GDP by the middle of next year. With Sunak’s latest measures in place, – and just as importantly working well – the UK could return in 2021 with 3.7% growth.

Dario Perkins, the head of macroeconomics at TS Lombard, says the longer the stop/start reactions to the virus go on, from social distancing to school and pub closures, the longer the recovery is likely to be.

“But governments will have to mount a massive fiscal response. We’ve already had 10 years of low growth. It will be completely unacceptable to have another 10 years. We thought the spending taps would open in response to the climate emergency. Now it will need to happen to tackle the economic consequences of the virus and to save the planet” he said.

That means a repeat of the 1930s, when it took the US economy until 1939 to reach the level of GDP seen in the 1920s, may be prevented by a double-barrelled blast of funds from central banks and governments in the next couple of years.

John Llewellyn, a former chief economist at the OECD, who now runs his own consulting firm, is sceptical that governments have the will to collaborate to boost growth while tackling climate change. He fears populist movements will force many national administrations to retreat further behind protectionist trade barriers, condemning the global economy to further years of low growth.

Tommaso Valletti, head of the department of economics and public policy at Imperial College Business School, said: “Looking at the past two centuries, we had many recessions but only one depression – in 1929 – which lasted almost a decade. So we really have a very limited sample size to draw from history.

“And the Great Depression happened with a perfect storm of bad events, including a tightening of monetary policy of the US central bank. We have learned how to lend support to the economy, and I observe that central banks are doing the right thing now, with expansionary monetary policies. I remain optimistic that we will avoid a repetition of the Great Depression: still, there will be massive economic and social costs and longer-term economic restructuring.”

Yet while central banks learned the lessons of the 1929 crash, it remains to be seen if governments have learnt the lesson of the last 10 years and put austerity behind them.

• By 1931, industrial production had dropped by half, prompting President Herbert Hoover’s administration to offer failing banks and other institutions government loans, allowing them to extend loans to businesses, which would hang on to staff. It was widely considered a flop.

• President Franklin D Roosevelt’s New Deal prompted three years of 3% average growth from 1933. This came to an end in 1937 when the Federal Reserve increased interest rates, sending the economy back into recession.

• Analysts at Goldman Sachs predict weekly claims will skyrocket to 2.25 million by this Thursday when the next figures are published.

• Economists estimate about 14 million jobs in the leisure and hospitality sector alone are at risk due to mandated shutdowns.