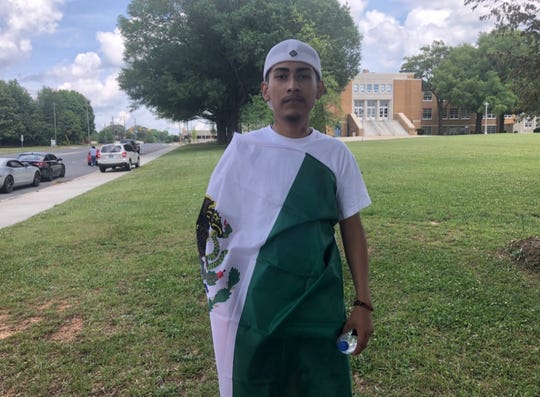 Ever Lopez, 18, says he wore a Mexican flag during graduation ceremonies for his family and to honor his parents who are Mexican immigrants. (Photo: Rachel Berry | The Courier-Tribune)

ASHEBORO, N.C. – More than 100,000 people had signed an online petition Monday demanding that a local high school award a diploma that was held back at graduation because a student draped a Mexican flag over his gown.

Controversy surrounding Ever Lopez has become so heated that police conducted extra patrols in and around Asheboro High School, saying at least 10 threatening emails have been sent to school employees. The author of one email stated “I’m gonna shoot up this school if you don’t give that young man his diploma,” police said.

The incident created a social media firestorm centered on this city of 25,000 people 85 miles northeast of Charlotte. And Siembra NC, a statewide Latinx advocacy organization, held a rally for Lopez and his family and has pledged full support.

“We actually have members here that have stood up, have fought back in our neighborhoods here in Asheboro against ICE, against wage theft and against discrimination in schools, which is what we’re seeing happening right now,” said Kelly Morales, an organizer for Siembra.

Lopez said he carried the flag into graduation Thursday night at Asheboro High School, draping it over his shoulders after he was seated. No one mentioned the flag until he reached the stage, he said.

“I did it for my family,” he said. “They came over here to give me a better future.”

A high school student wore a Mexican flag over his graduation gown. He left without a diploma.

“The heart of the issue is the fact that the student did not follow the established dress code for the event and detracted from the importance and the solemnity of the ceremony,” the district said in a statement. “Our dress code is in place to ensure the dignity of the event is upheld and is fair to all students.”

District officials say they have offered to give Lopez the diploma. But Lopez said that after the ceremony he and his parents met with Principal Penny Crooks, who wanted him to apologize.

“I ain’t apologizing for nothing,” Lopez said. “It’s you who should be apologizing. You’re the one doing wrong.”

The Change.org petition is entitled “Give this man his diploma.”

“Ever Lopez was wearing a Mexican flag during his graduation and didn’t receive his diploma,” the petition states. “This is unacceptable, this man worked his butt off for HIS diploma.”

“My mans left with dignity and honor!” responded @CarlosRIOS77. “He refused to take off the flag and threw his fist up high! May this brother get countless open doors and opportunities!”

But not all agreed with Lopez.

“What’s the point of dress code if you can wear what you want?” tweeted @coreymoto. “There is no grey area with that, get your diploma and go celebrate in whatever style you want.”

And this from @irregular_view: “If it was a Confederate flag they would have given him 2 diplomas.”